This is another model of the series sack Academy of 50 anniversary of WWII, the famous B 25 H/J Mitchell, a escala 1/144. 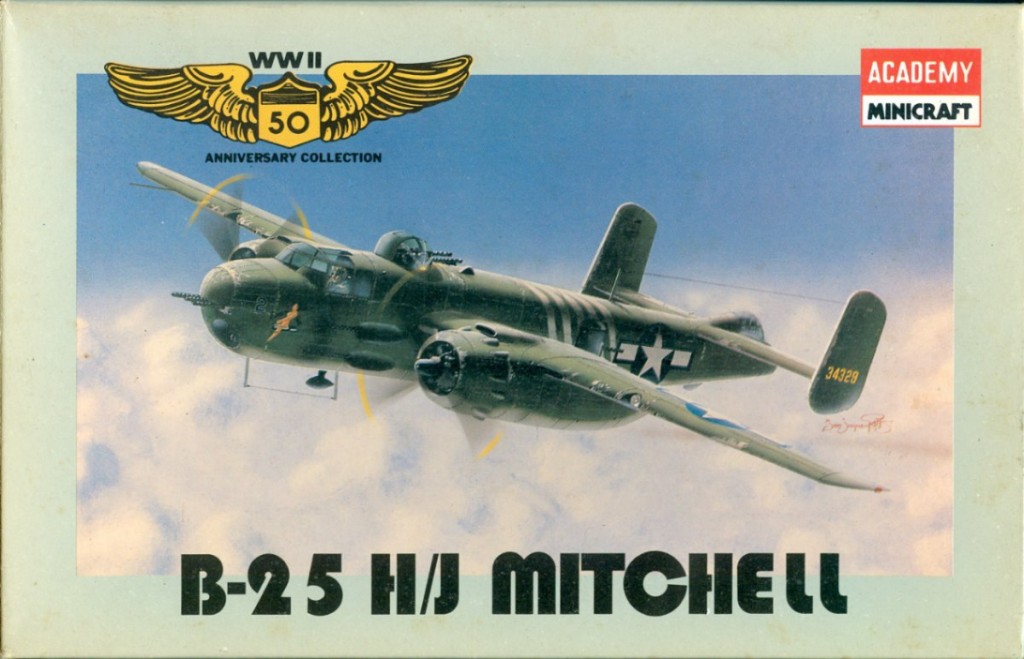 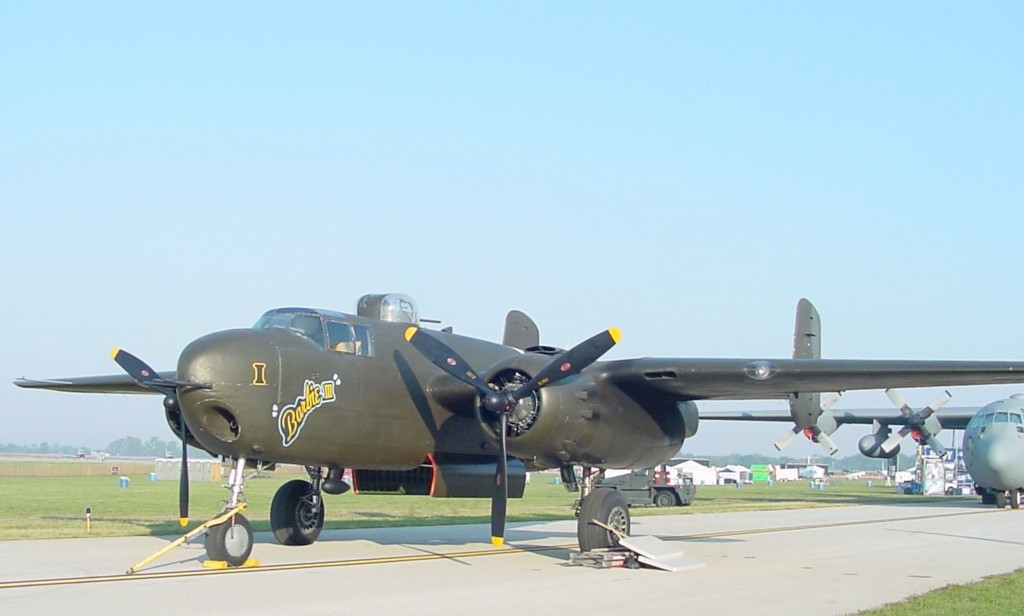 El North American B-25 Mitchell It was a twin-engine bomber average American the years 1940 company manufactured by North American Aviation. It was used by many Allied air forces countries WWII, in all theaters of World War II, as well as many other air forces after the war ended, nearly four decades during service.

The B-25 was named Mitchell en honor del general Billy Mitchell, a pioneer of US military aviation demonstrated that a bomber could sink a battleship. The B-25 is the only American military aircraft received the name of a particular person. At the end of its production, they had made near 10.000 copies of the B-25 in different versions. These include some models derived as patrol bomber PBJ-1 Navy and Marine Corps aircraft fotorreconocimiento and F-10 Air Force.

As we discuss in another post for such a small scale mold quality is good and can do a good job. The color scheme that comes in the instructions is "Olive drab" and "Light gray" although I have used the Olive Green XF-58 and gray sky XF-19 de Tamiya. 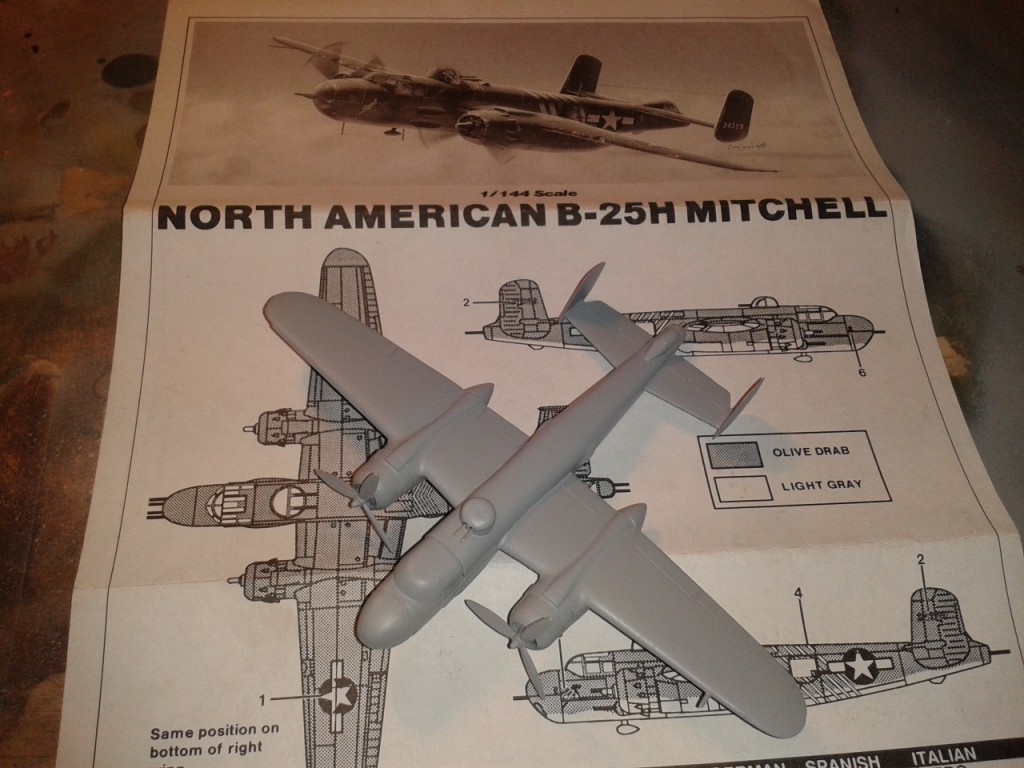 The next step after a few hours to dry the primer is paneling pattern with a dark tone, I use matte black Tamiya XF-1. 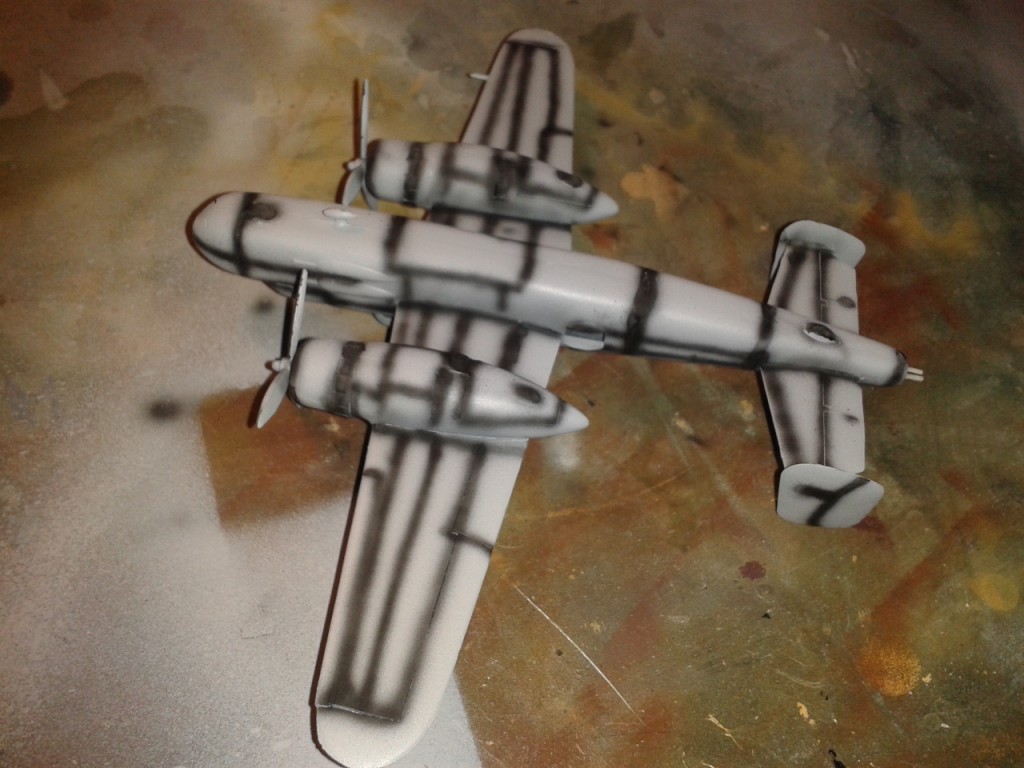 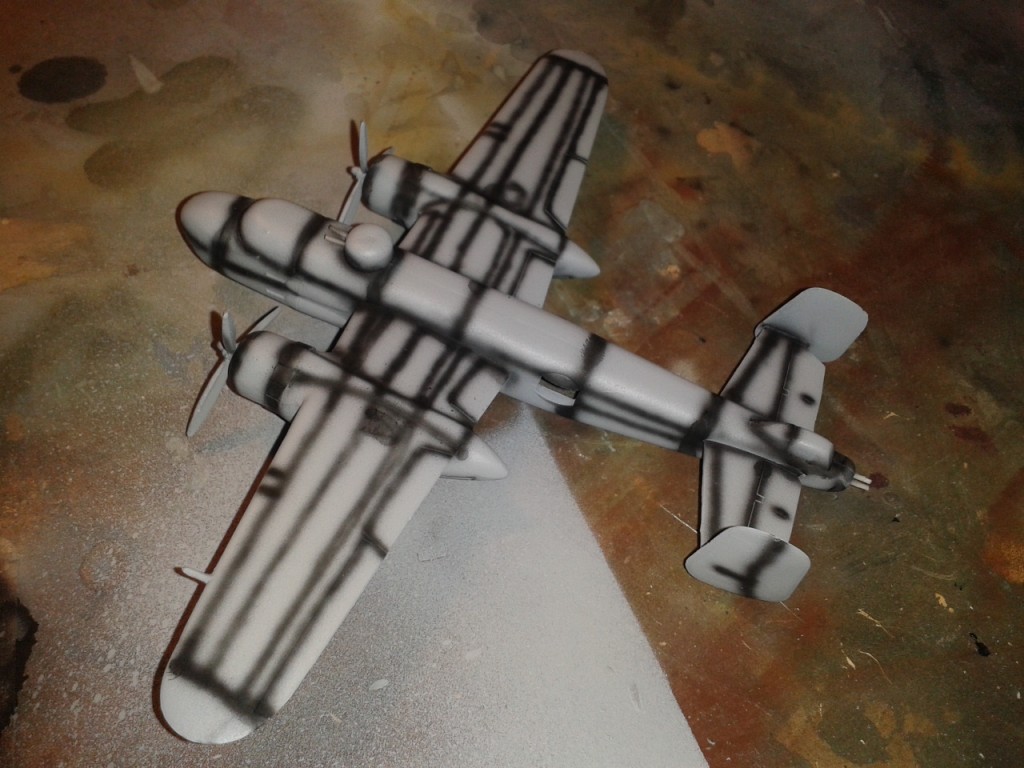 We proceed to apply the paint to the top of the apparatus olive green Tamiya diluted in solvent from the same brand so that when applied they can gently see the black lines painted to top.

After applying olive green coat and let dry a 24 hours apply light on aircraft panels to highlight a little more with a mixture of olive green and a little white and apply airbrush. 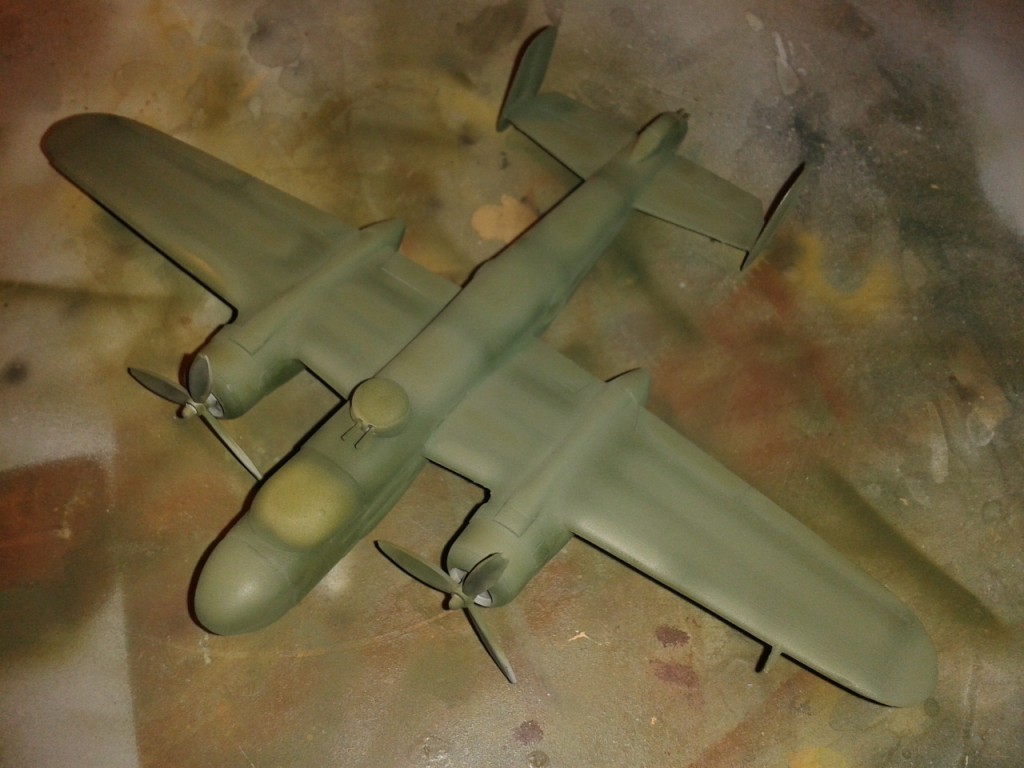 Once the paint dries well proceed to paint the underside of the plane with the gray sky, but before that I mask with masking tape parties who are not going to mess that color it already painted. 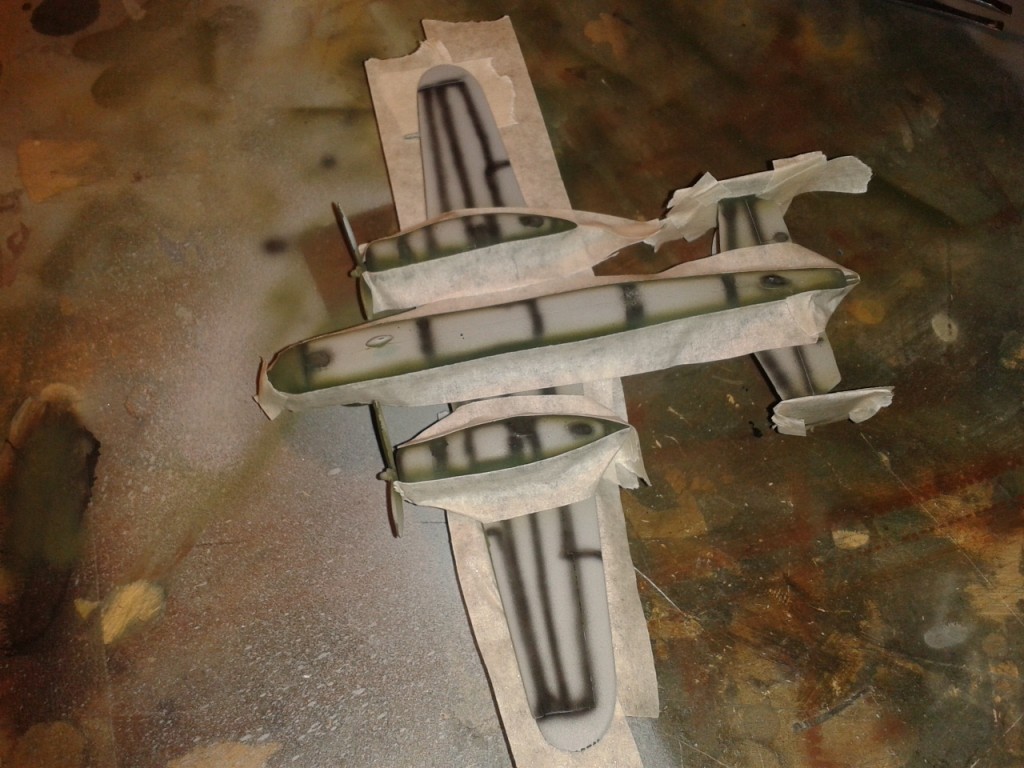 Now apply the paint with airbrush, This is the result after removal of masking tape. 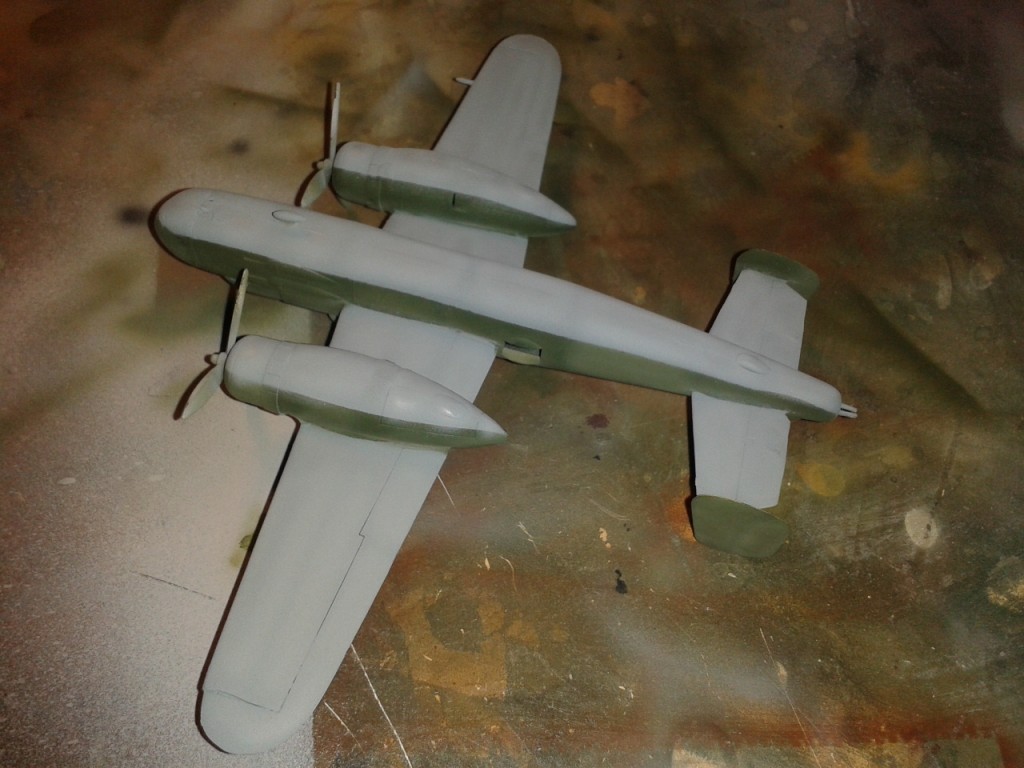 We hope to dry all other 24 hours and paint the details of the guns of the artillery turrets and sides of B25 and its propellers, waited a few hours for it to dry and proceed to apply a coat of gloss varnish Tamiya XF-22 to protect the paint, unify tones and eliminate glare of the decals with matte paint previously applied. 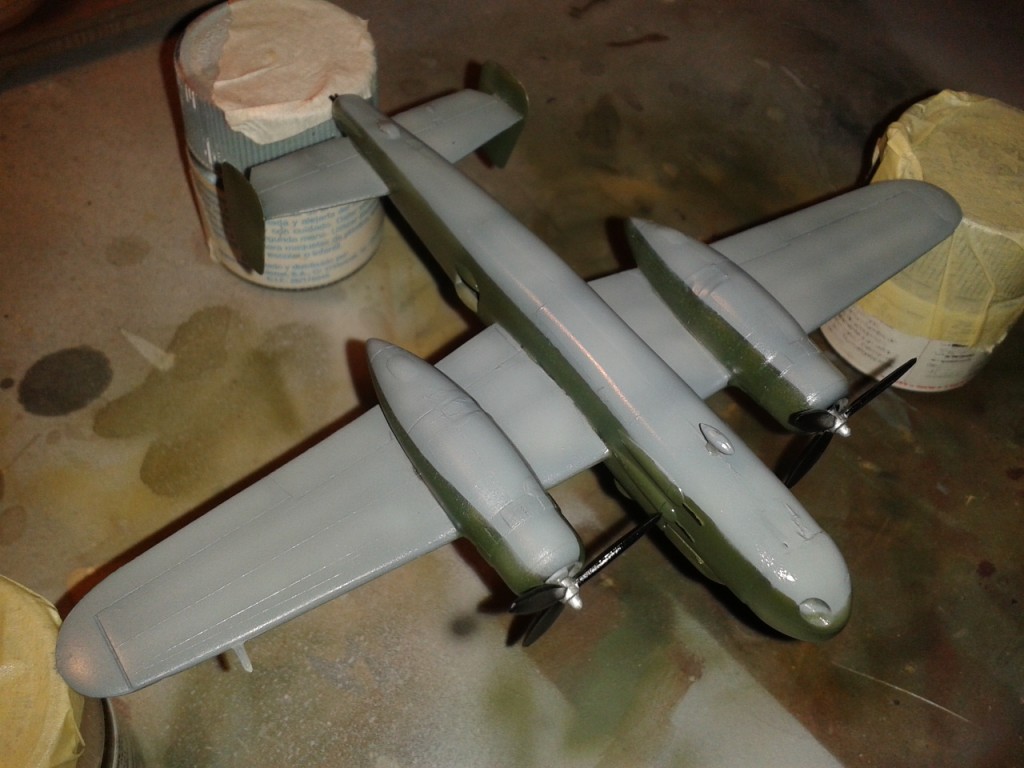 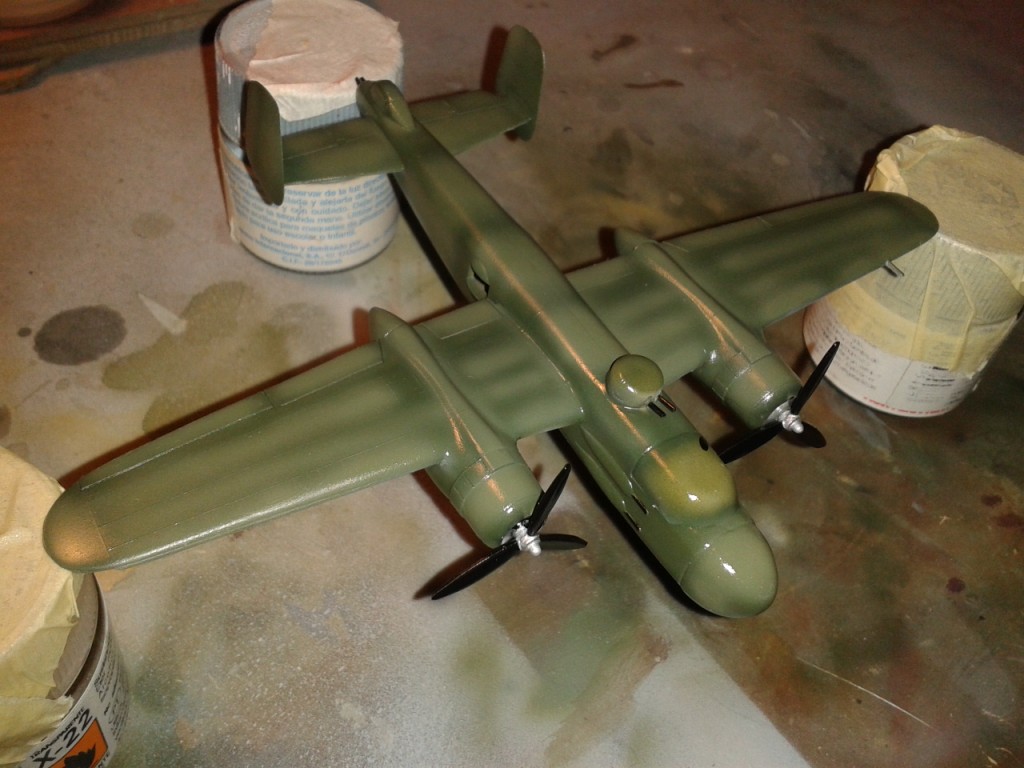 Let it dry a 24 hours more and proceed to remove the protection of the crystals, paint some silver accents, brush frames bomber cockpit and turrets and finally apply the decals always using liquids for the preparation and adherence of the same Microsol and Microset. 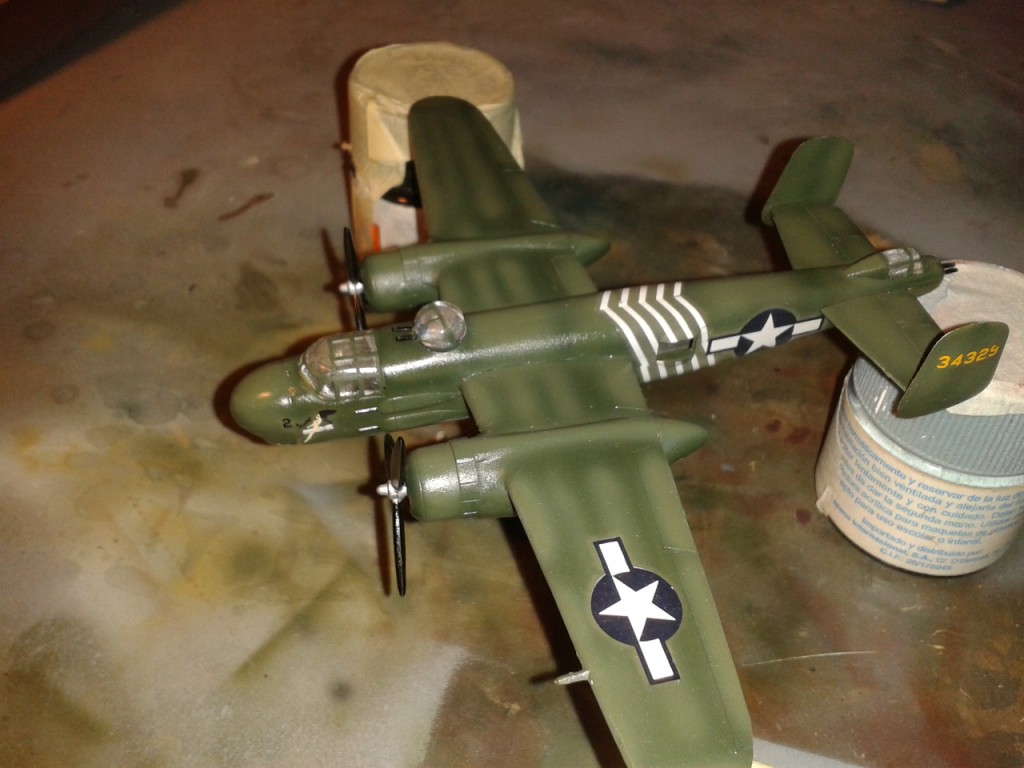 Once the liquids have effect on the decals and everything is dry apply another coat of gloss varnish to protect them and let dry. 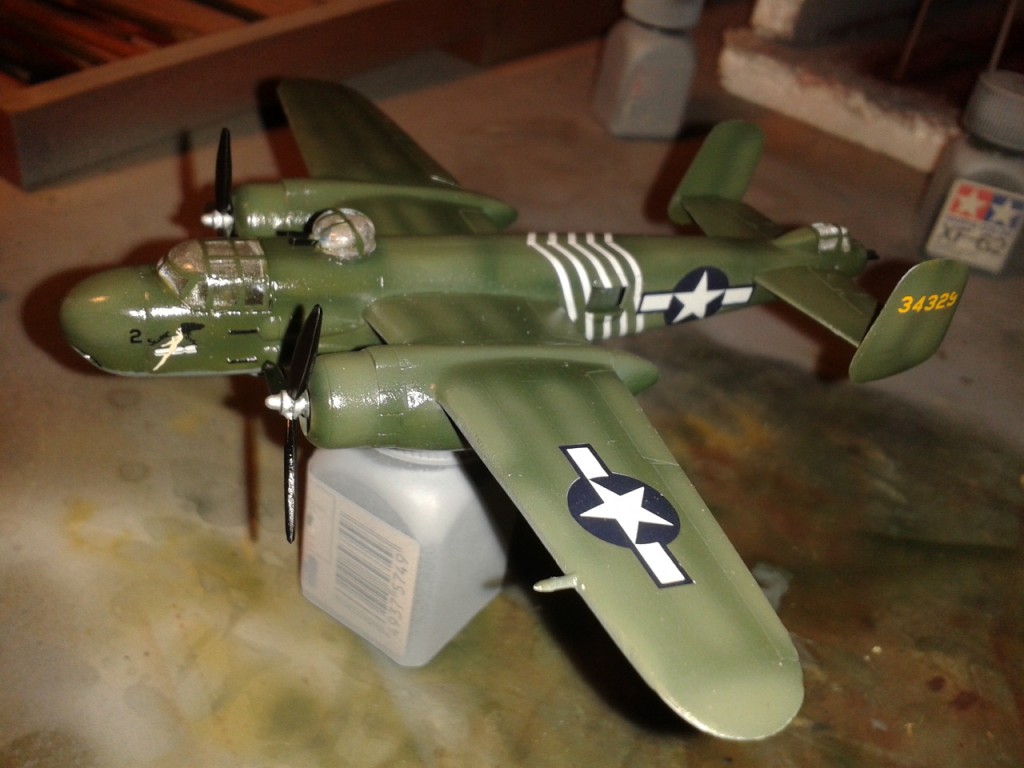 Now we turn to enguarrado the appliance with a black wash made in "Flory Models" for shading and paneling of the apparatus. 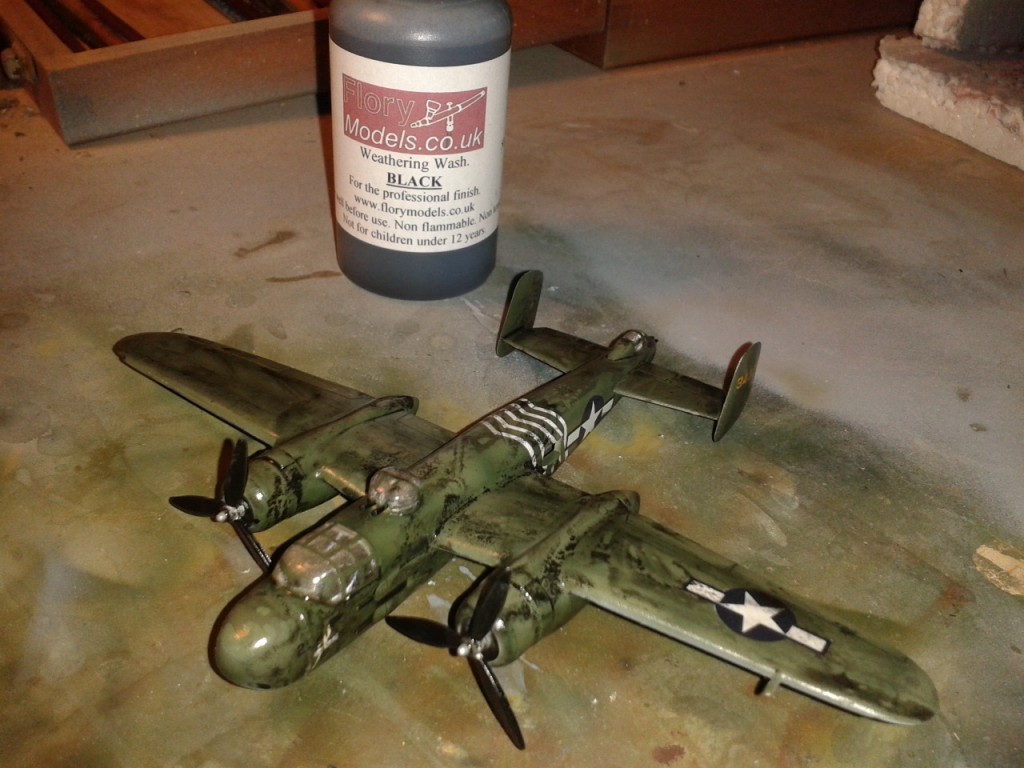 Let it dry and then wipe off the excess with a damp cloth.

Once clean, had to varnish the whole plane with a transparent glossy varnish. This is the final result. 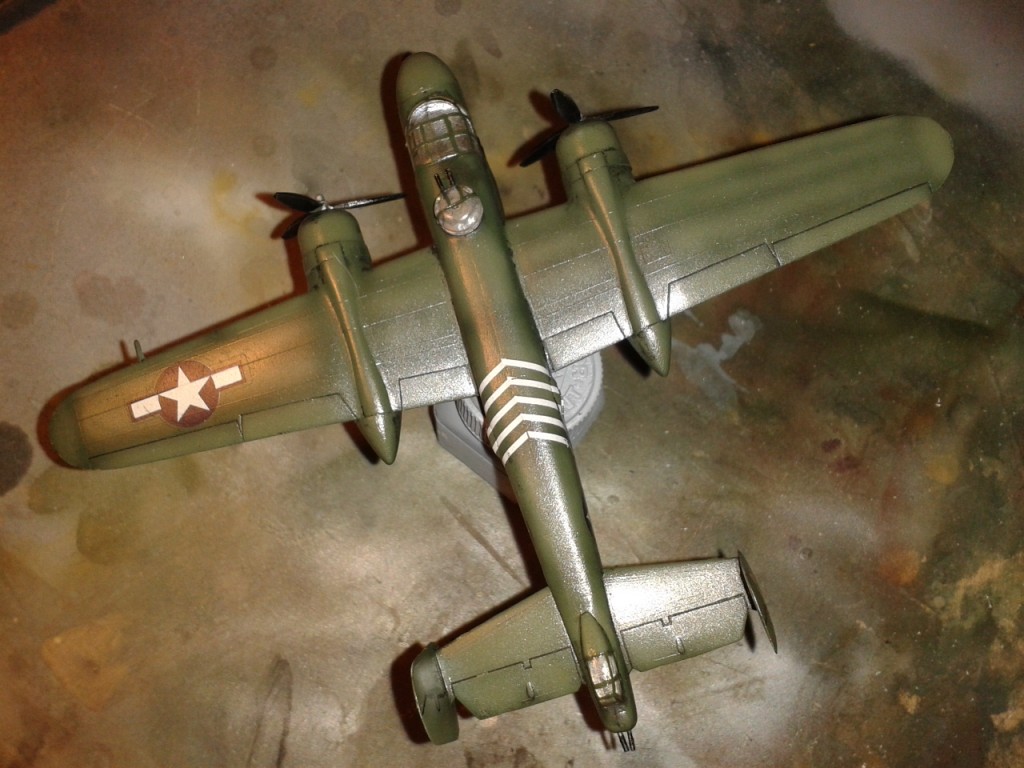 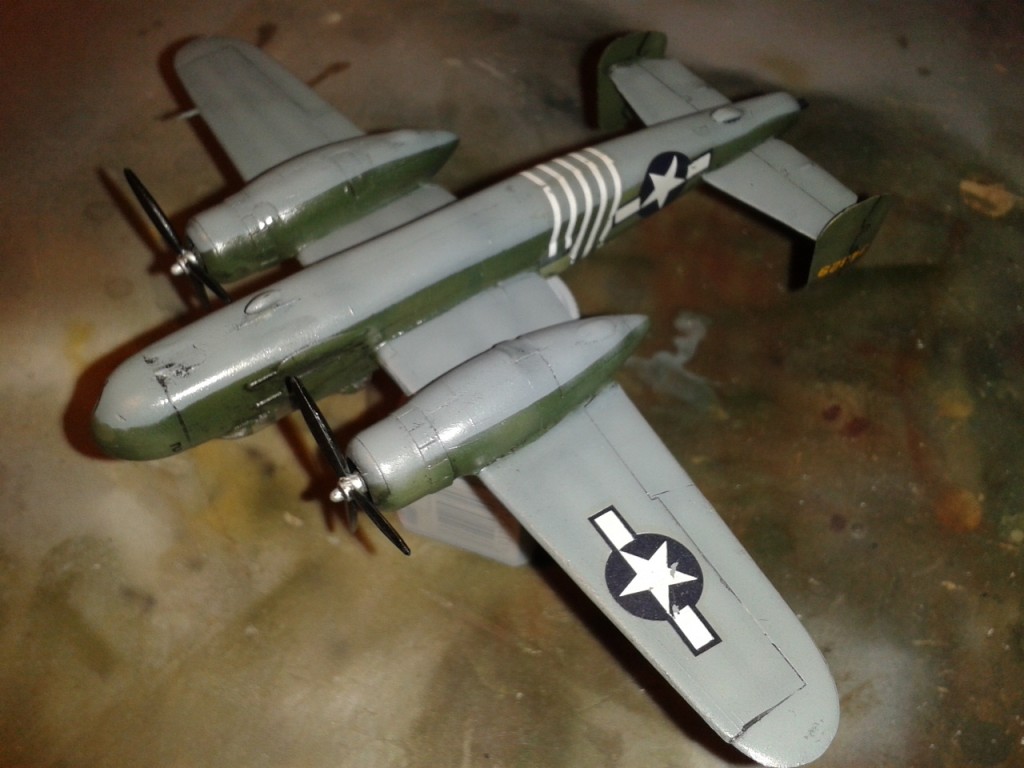 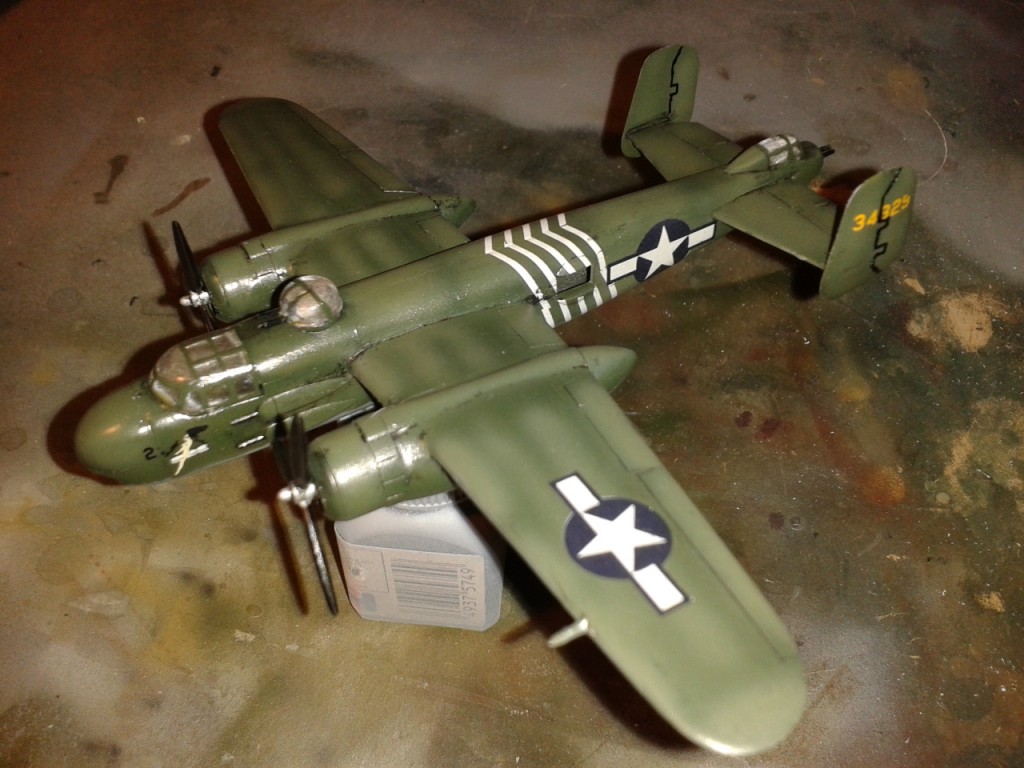 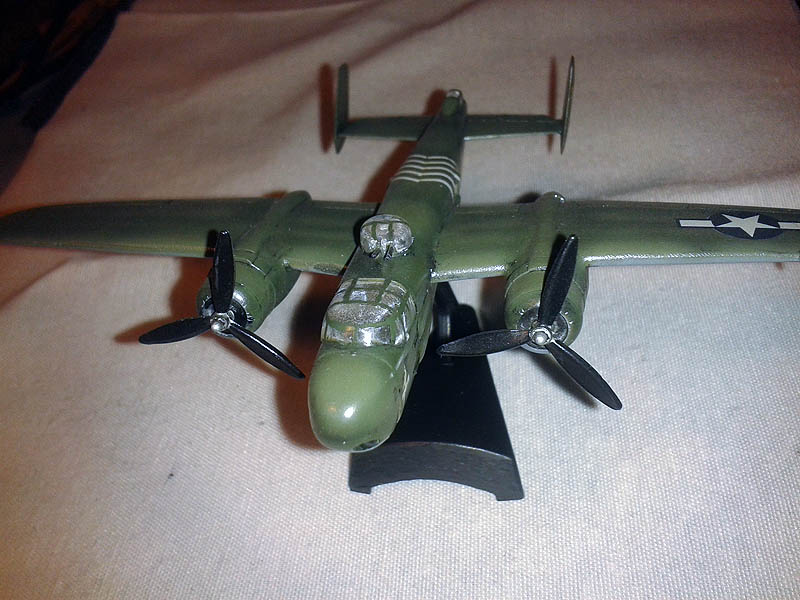 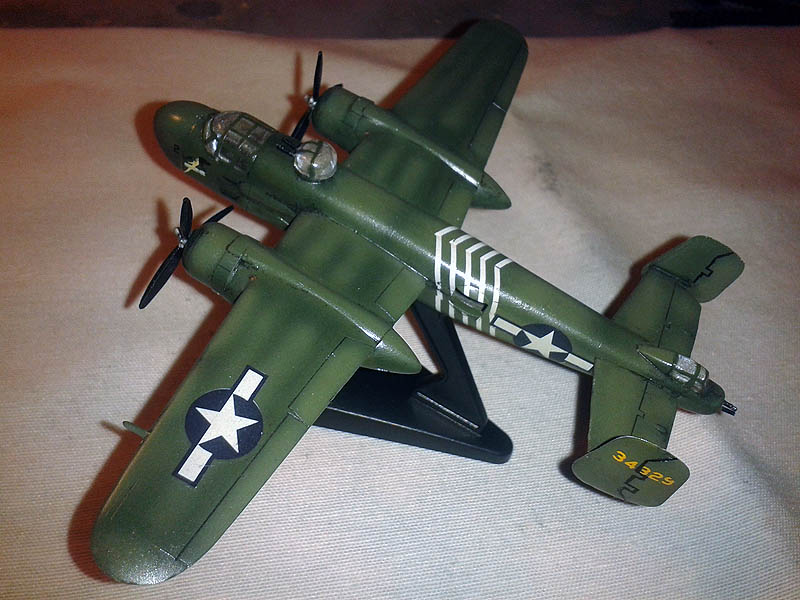 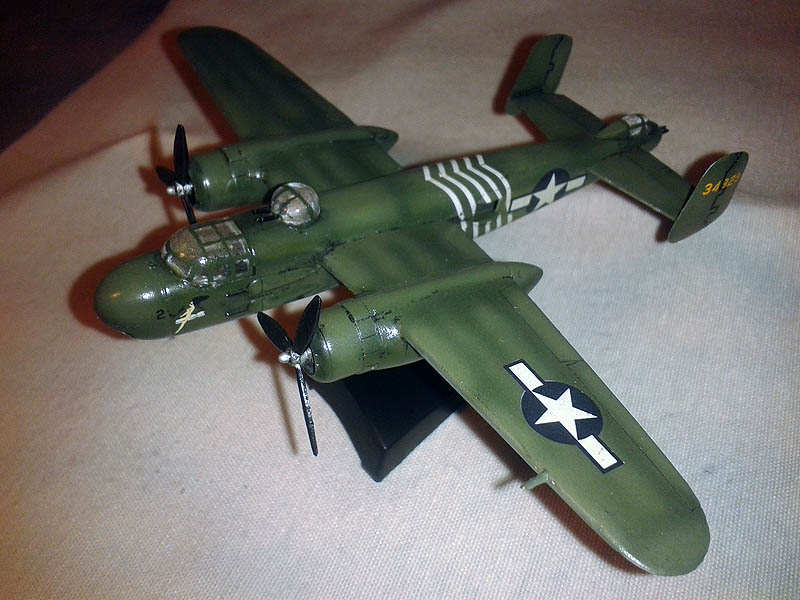