Some time ago, buy a pair of planes scale 1/144 Brand Academy , never before, planes had mounted such a small scale, felt curiosity and for the price I decided to buy. Well, after several years now forgotten on the shelf, I decided to start and end models, this particular is a beautiful bomber's Consolidated B24 en su variante J. 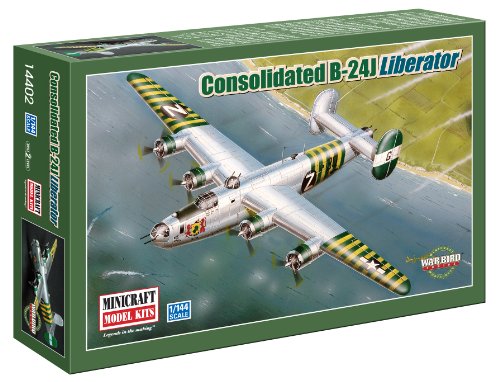 Brief history of Consolidated B24 Bomber: 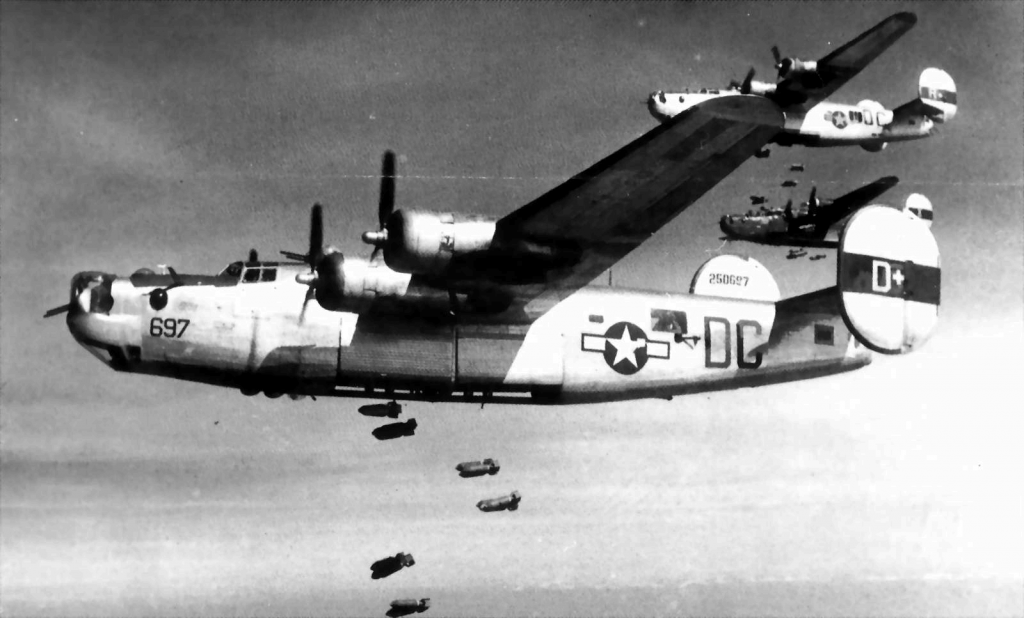 Produced in greater numbers than any other US aircraft, The Liberator had a long and distinguished career with the US. and allied air forces. Never as glamorous as the B-17 Fortress, with whom he shared the offensive daylight heavy shelling on Europe, The B24 was however, become a bomber large capacity.
The B-24J in front of the box was the most used of all the Libertadores and saw extensive service, mainly in the Pacific, which was the main heavy bomber until the appearance of the B-29 1944. Also served extensively in Europe, flying missions in daylight against Germany.
Maximum speed: 300 mph in 30.000 feet
Power: 4 x 1.200 hp Pratt and Whitney R-1830 engines.
Rank: 1.700 kilometers bomb load.
Armament: 10 x 0.5in guns, charge pumps up 12.800 pounds.

It is a model whose size has good quality and their parts fit perfectly, after careful installation I protect the crystals with Maskol and his step primer gray marking Tamiya. 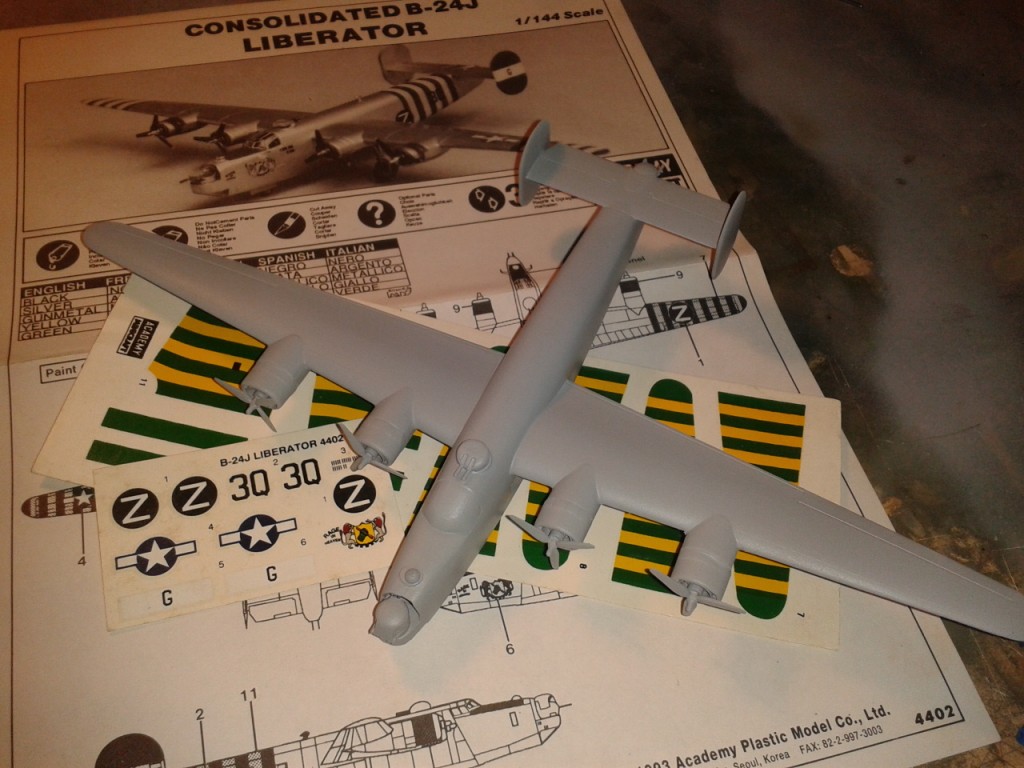 After a day leaving the primer to dry, Step paneling the plane with the airbrush and black matte, I used Tamiya XF-1. Some panels painted black so that your tone is darker and simulate changing it sometime. 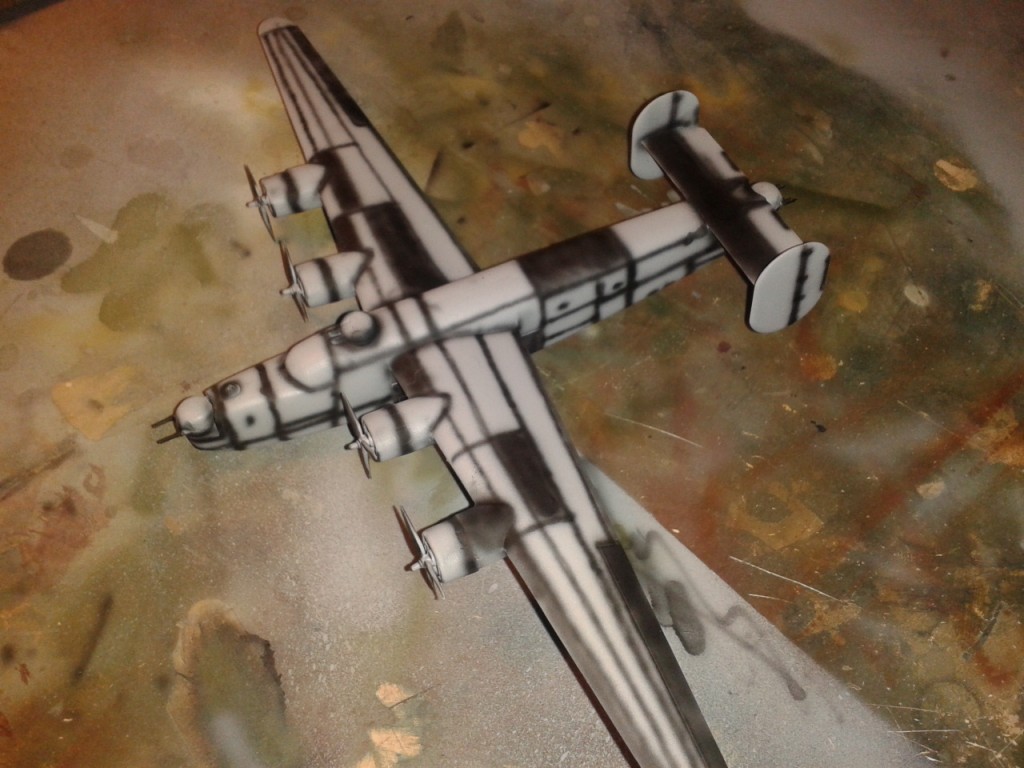 Paneling of B24 bottom. 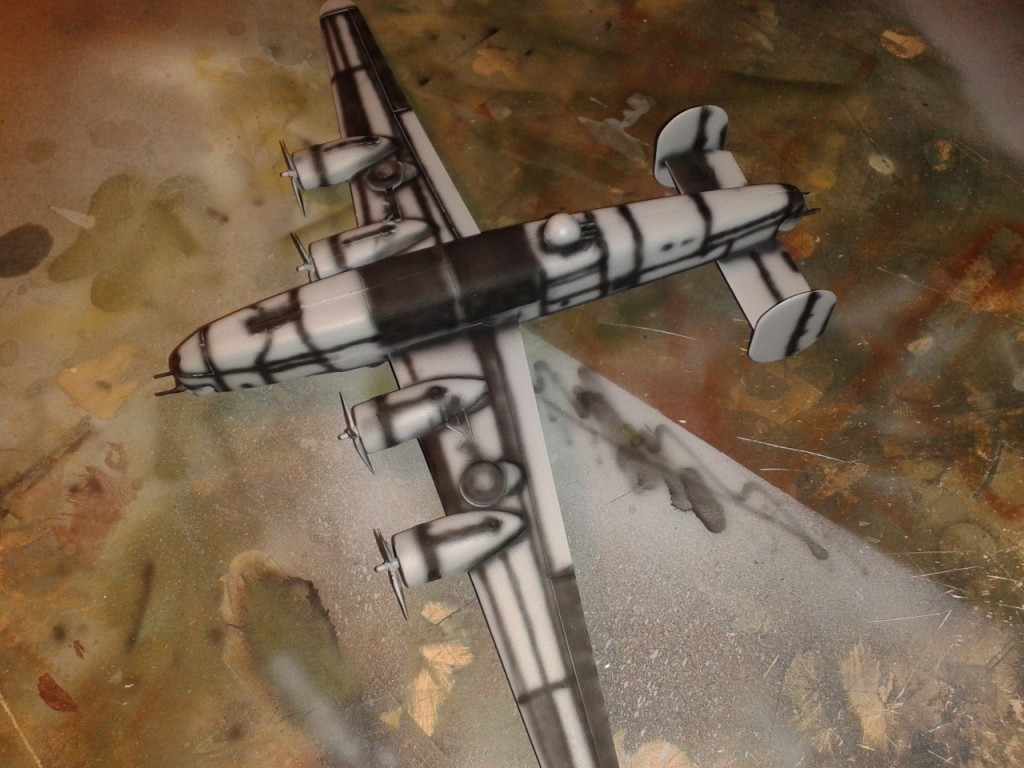 Once dry paneling in a few minutes I come to your primer in its final color, silver, original color of the plane, in this case I used color plata number 11 Humbrol (enamel) somewhat diluted in solvent of the same brand and giving fine past for not covering the entire paneling in black. 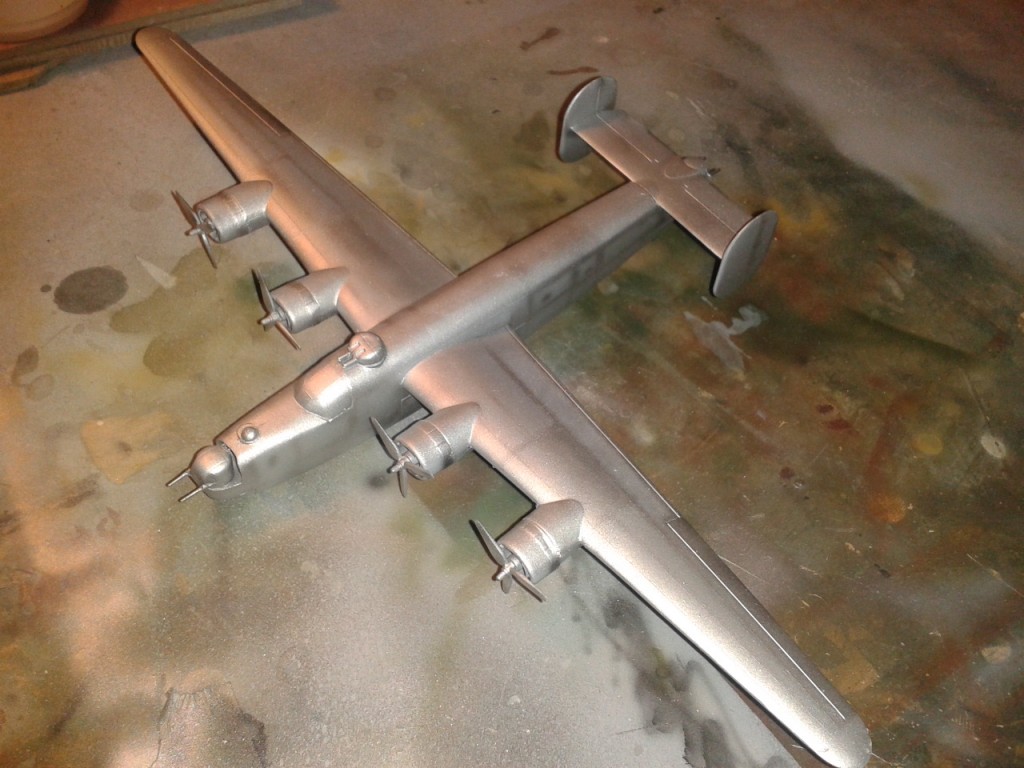 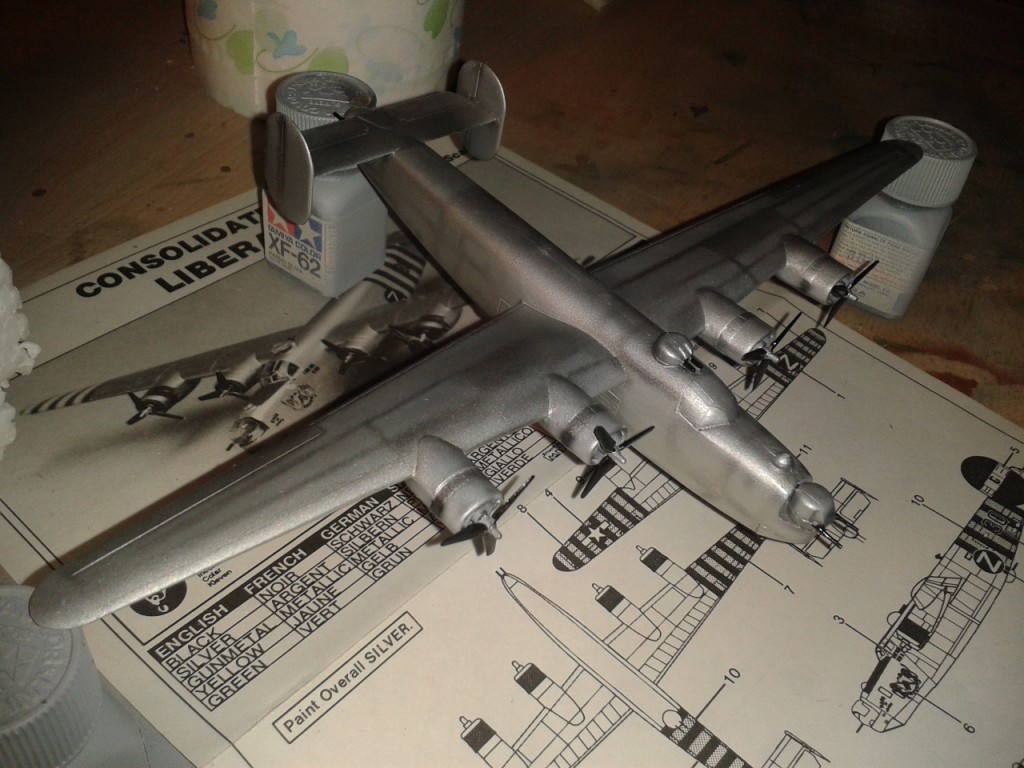 Dejamos secar 24 hours and continue with the process, Now give it a pass glossy varnish Tamiya XF-22 then applying decals, This process eliminates the bright contrast of the decal on silver paint and protects the paint. A good dry time I come with decals, a little difficult to place their large size especially yellow and green stripes on the wings and rear section. Using Microsol y Microset apply the same instructions as the set. 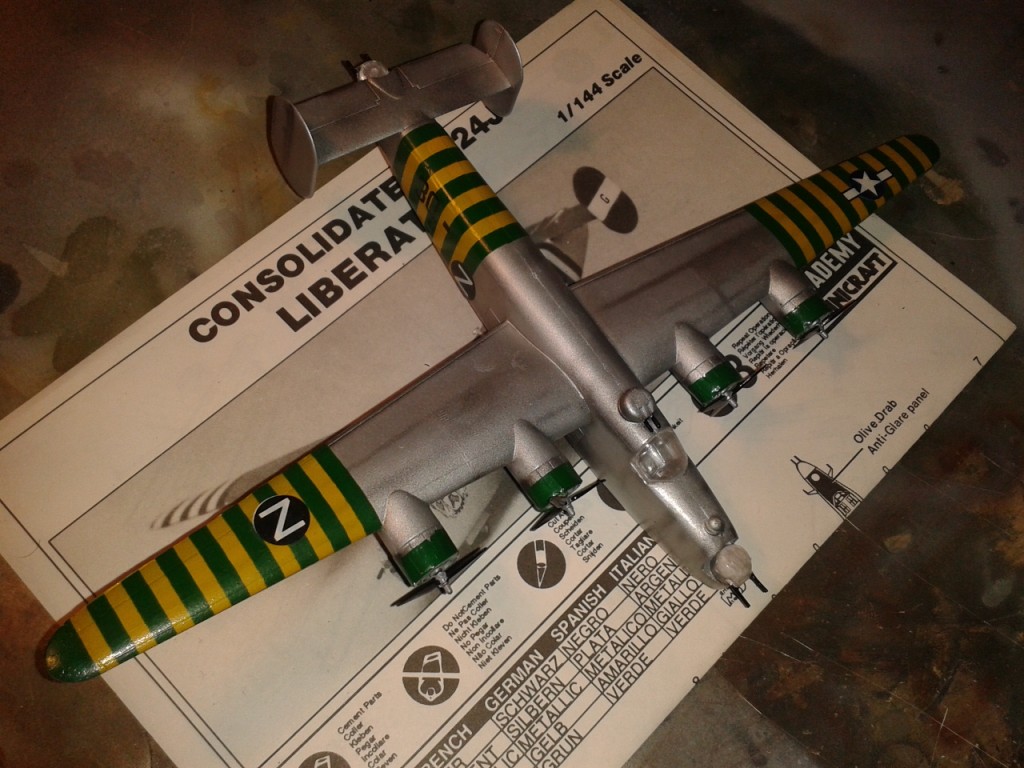 We let Microsol Microset solutions and act in several hours and once everything dry well apply another coat of gloss varnish to protect the decals, when well dried proceed to brush and silver num. 11 Humbrol lines frames cockpit and turrets, and the yellow on the tips of the blades B24 bomber and let dry.

Within hours I proceed to give another pass with airbrush gloss varnish and let dry other 24 hours and then give a wash in black to highlight and shading corners and lines ailerons and crystals, I used a washes Flory Model, but can also be done with oils, let dry a few minutes and proceed to remove the excess with a damp cloth and let dry turn to other minutes. 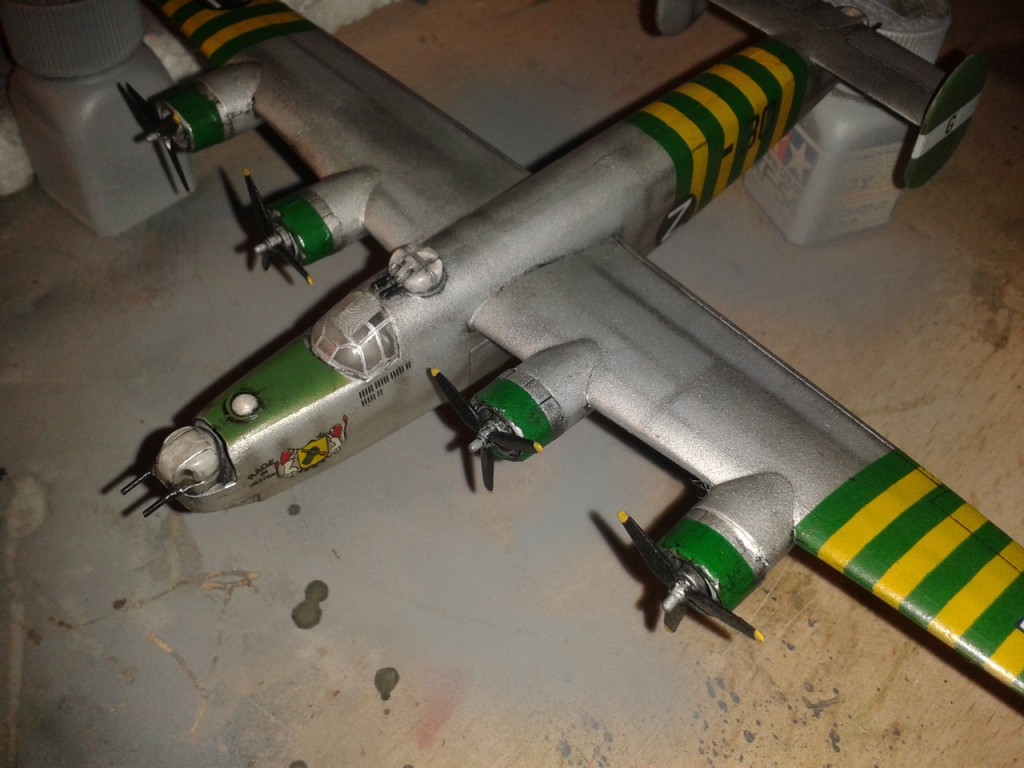 Finally I come to paint and protect the entire process with a Transparent satin varnish of Humbrol brand.

This is the final result we now only need to make a nice base for this lovely Bomber WWII. 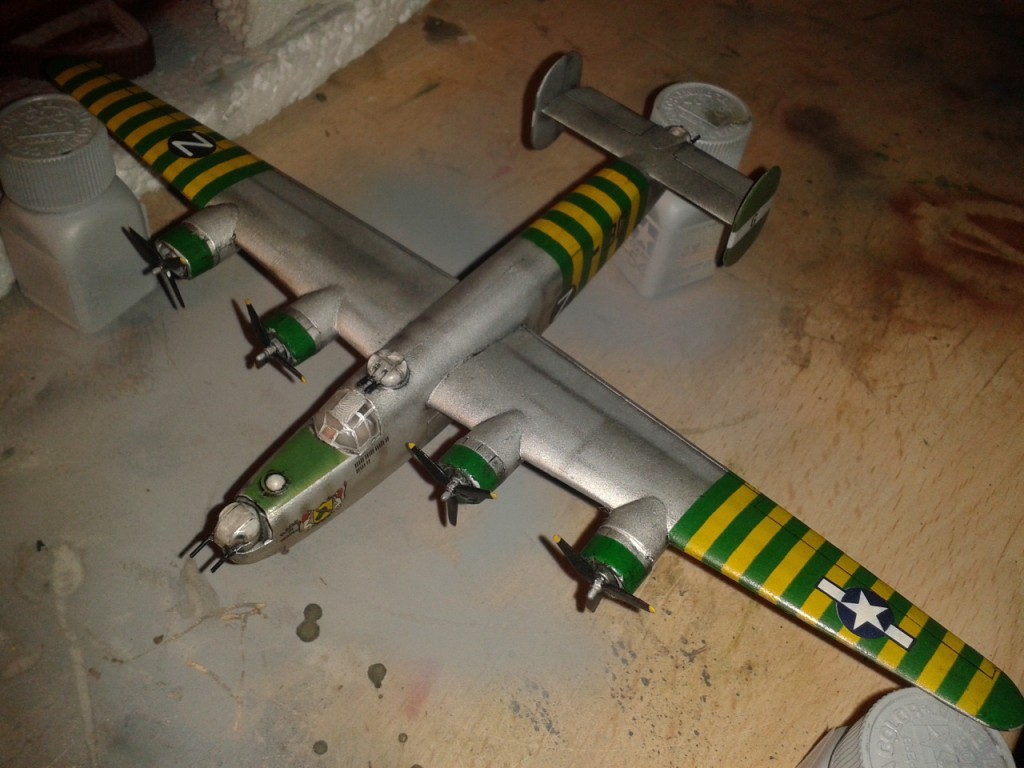 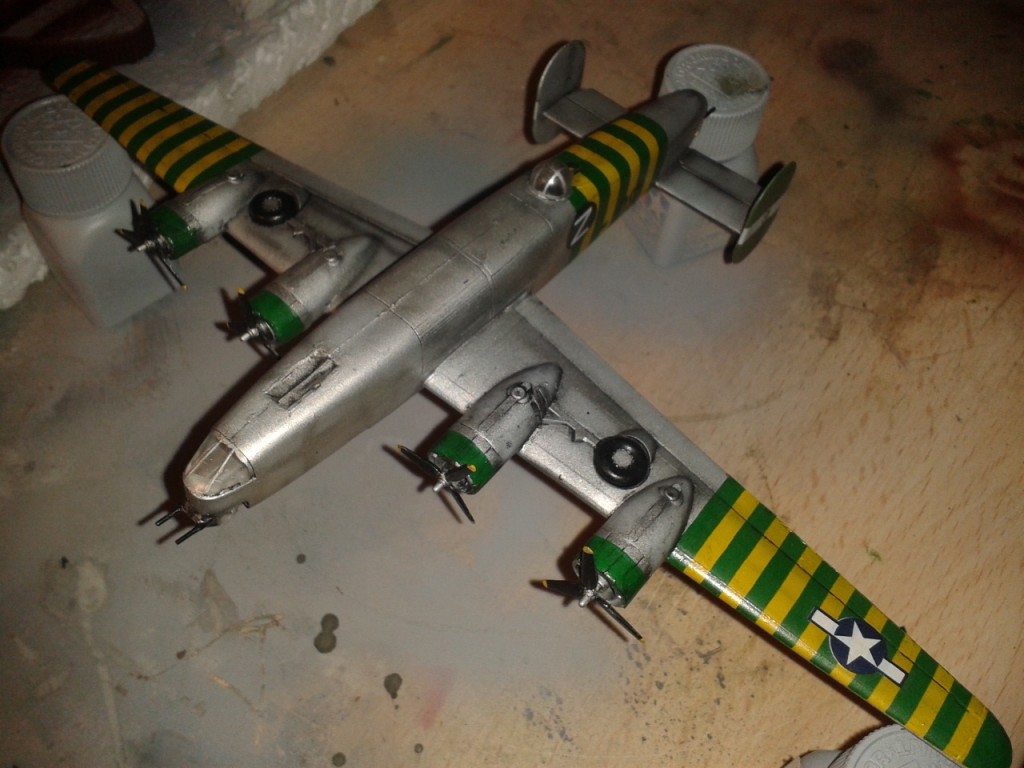 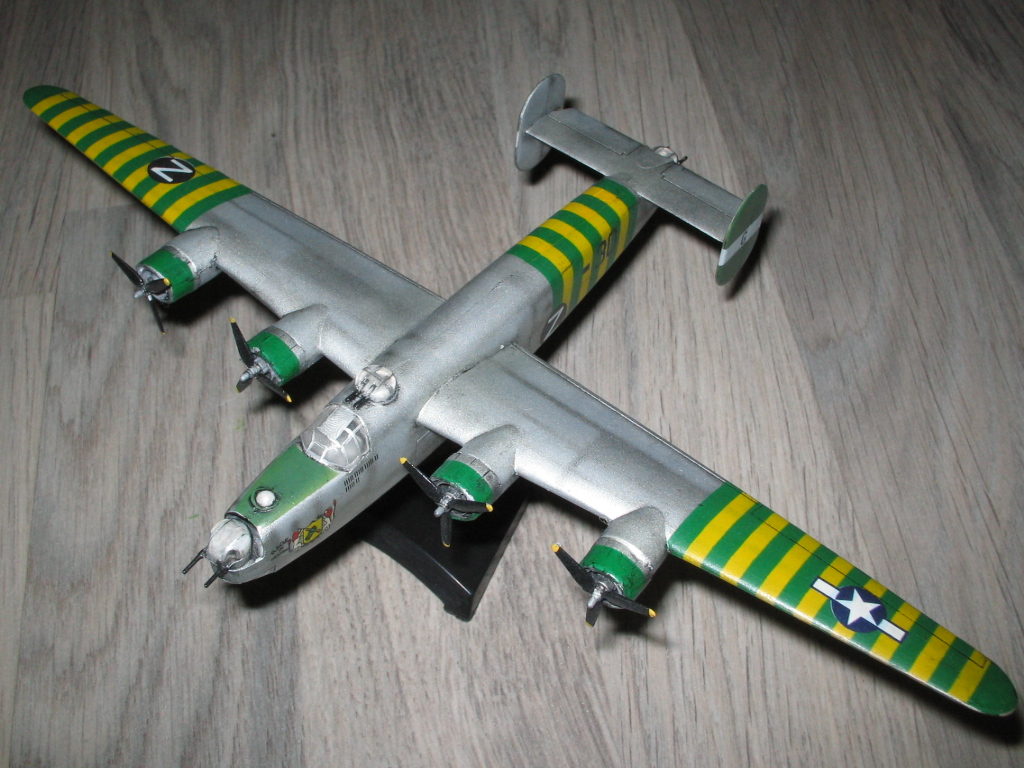 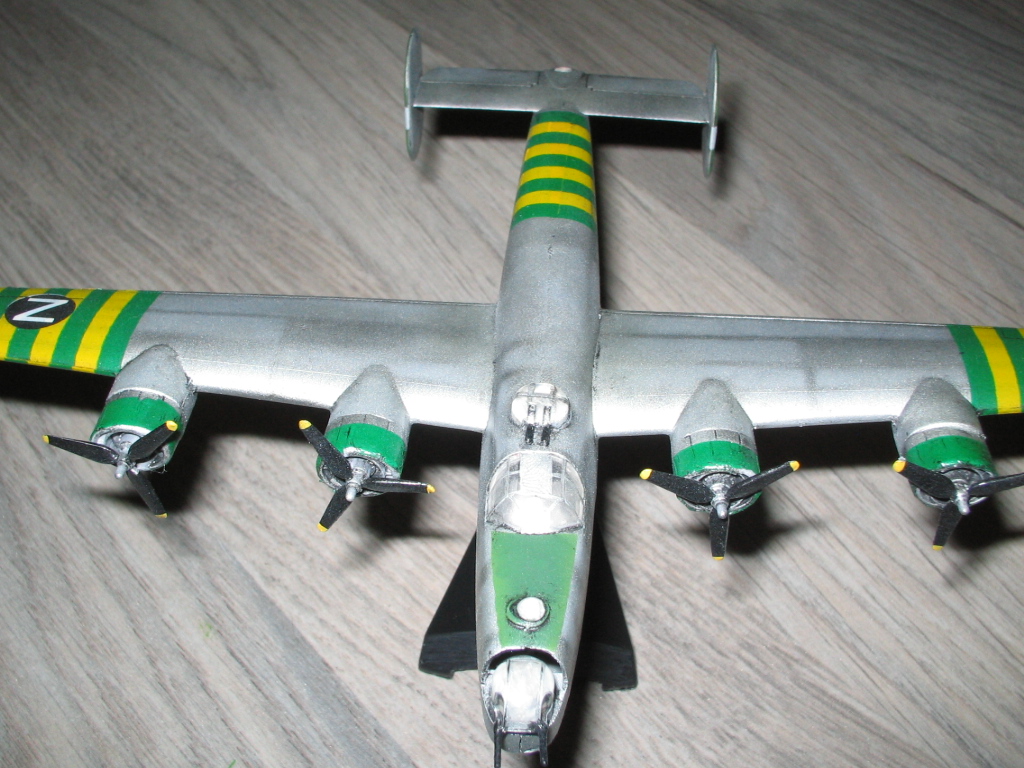 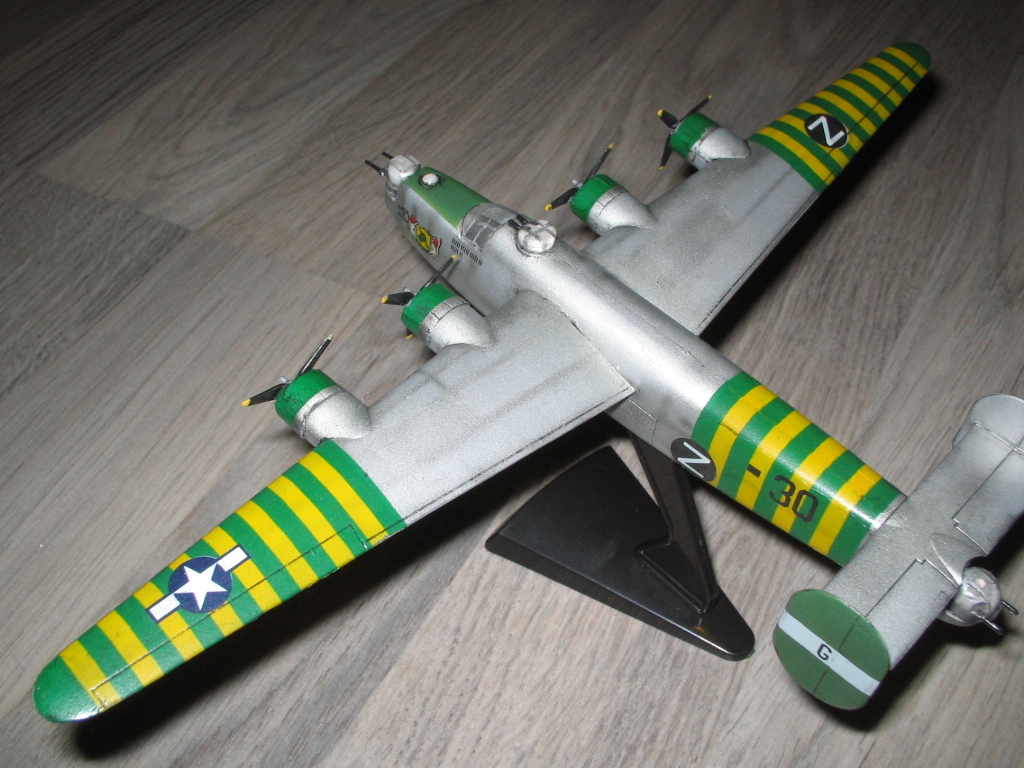 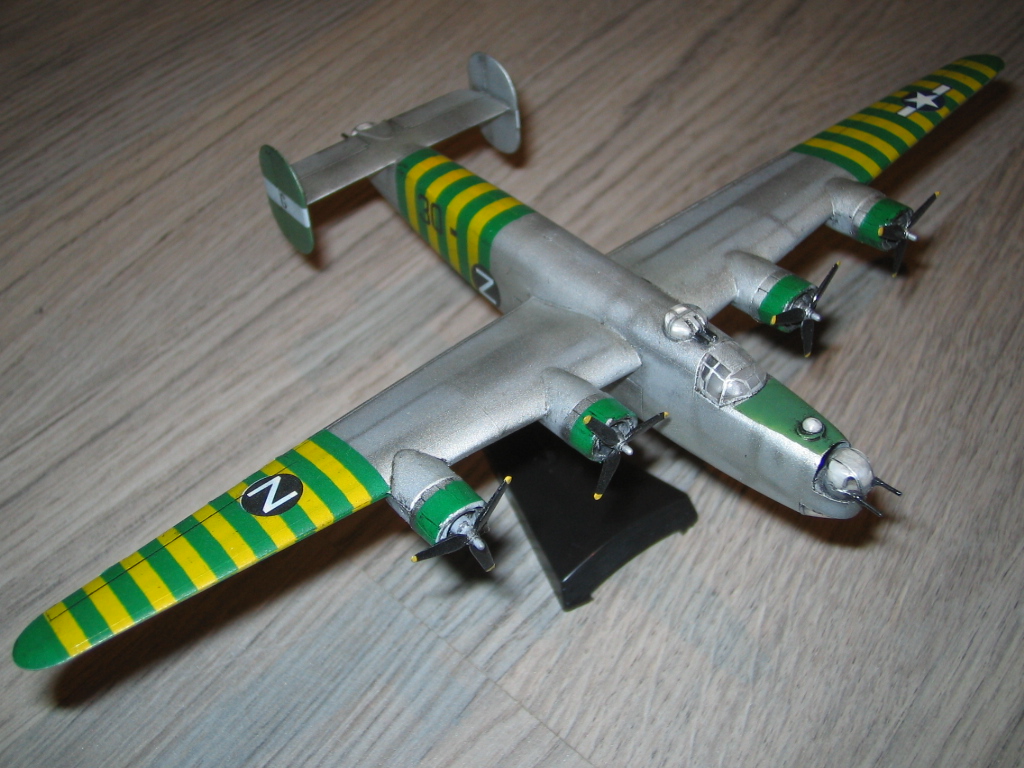 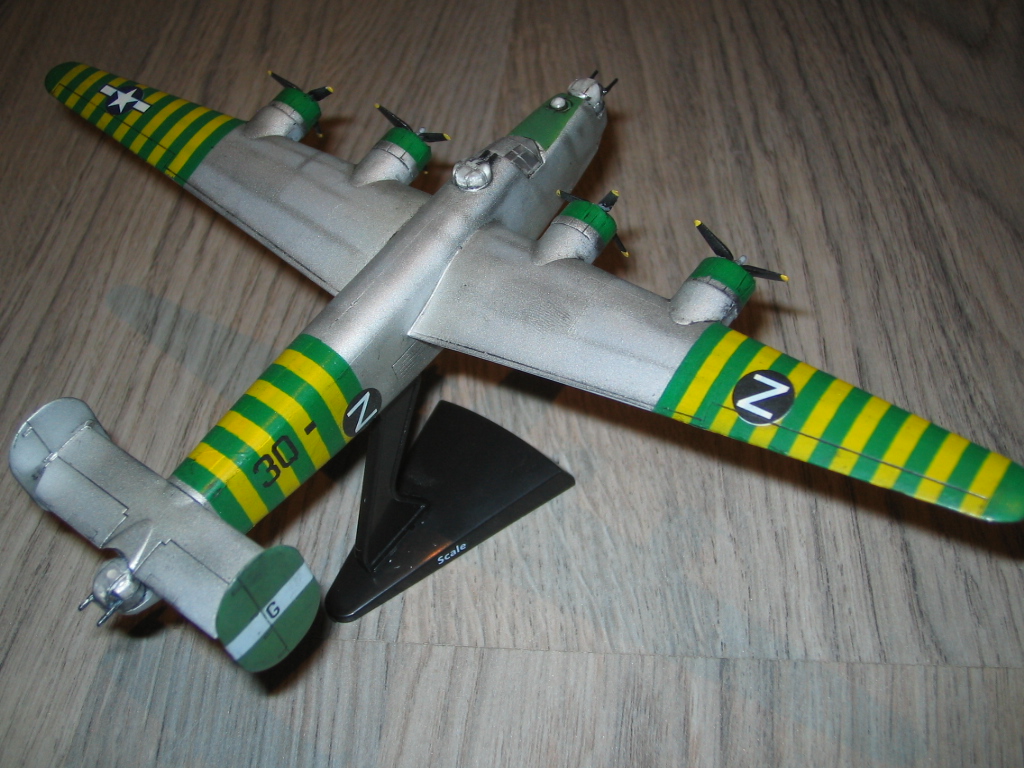