One of the most produced German cars is the PzKpfw IV which was present in all battlefronts. Hasegawa This kit has several Panzer scale 1:72 and I've decided to ride the version Ausf. G with winter camouflage.

This is the Kit: 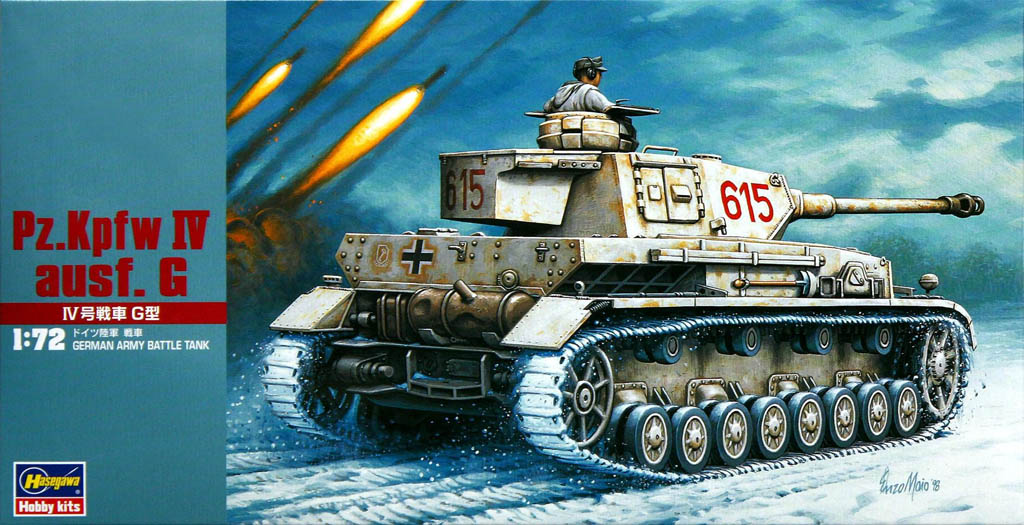 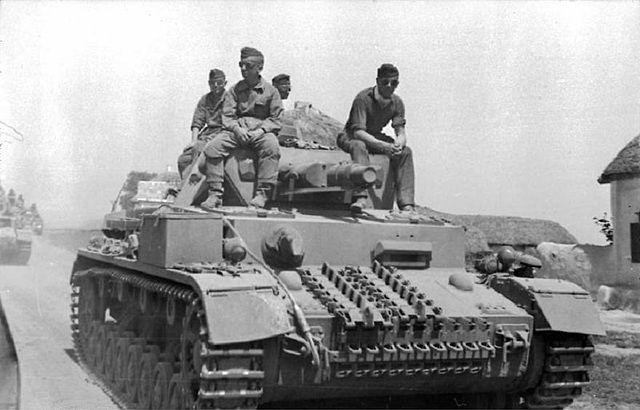 Designed as tank infantry support, the Panzer IV was not originally designed to fight enemy tanks; this function was performed by the lighter Panzer III. Sin embargo, to confront the Soviet T-34 was obsolete Panzer III and Panzer IV came to assume the role of anti replacement cars in model III, that thereafter would be dedicated to the support of the infantry or transformed into other vehicles. The Panzer IV was the German tank produced in greater numbers and more widely used in World War II, and was used as a basis for the production of many other armored fighting vehicles, including the Jagdpanzer IV tank destroyer included, assault cannon Sturmgeschütz IV, The self-propelled antiaircraft weapon Flakpanzer IV “Whirlwind”, and self-propelled gun Brummbär, inter alia.

Forget taking pictures of the assembly so directly passeth the painting process model, for this kit as I had said before I will simulate winter camouflage as this on the cover of the box it has used white XF-2 and its original color before this camouflage has used the yellow desert XF-59 Tamiya .

First of all we give an old gray primer dry and once we give the base color XF-59. 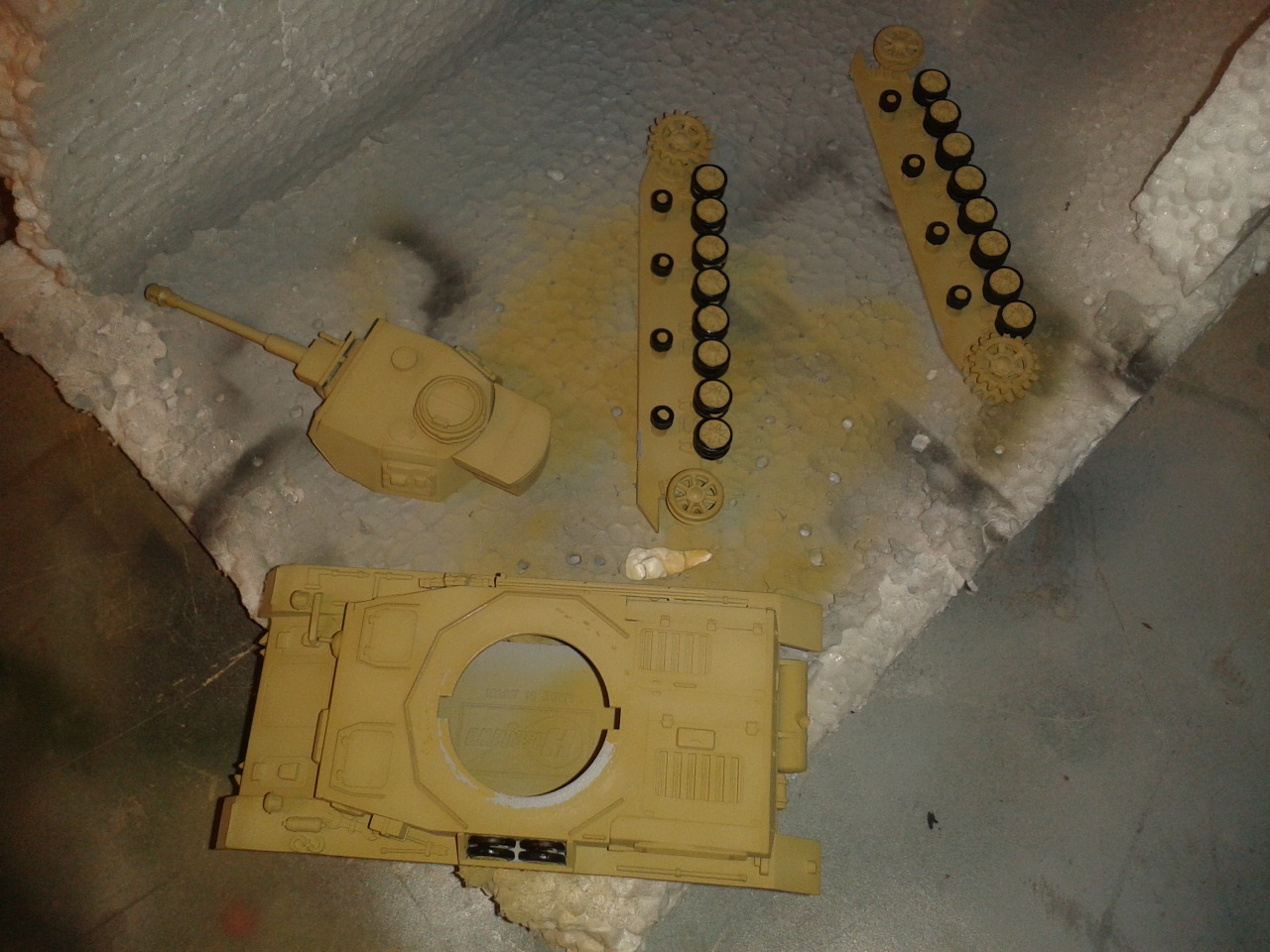 With XF-59 base color and a bit of black XF-1 darken the desert yellow to create some lighting effects in the car painting the edges and more shaded sites panzer. 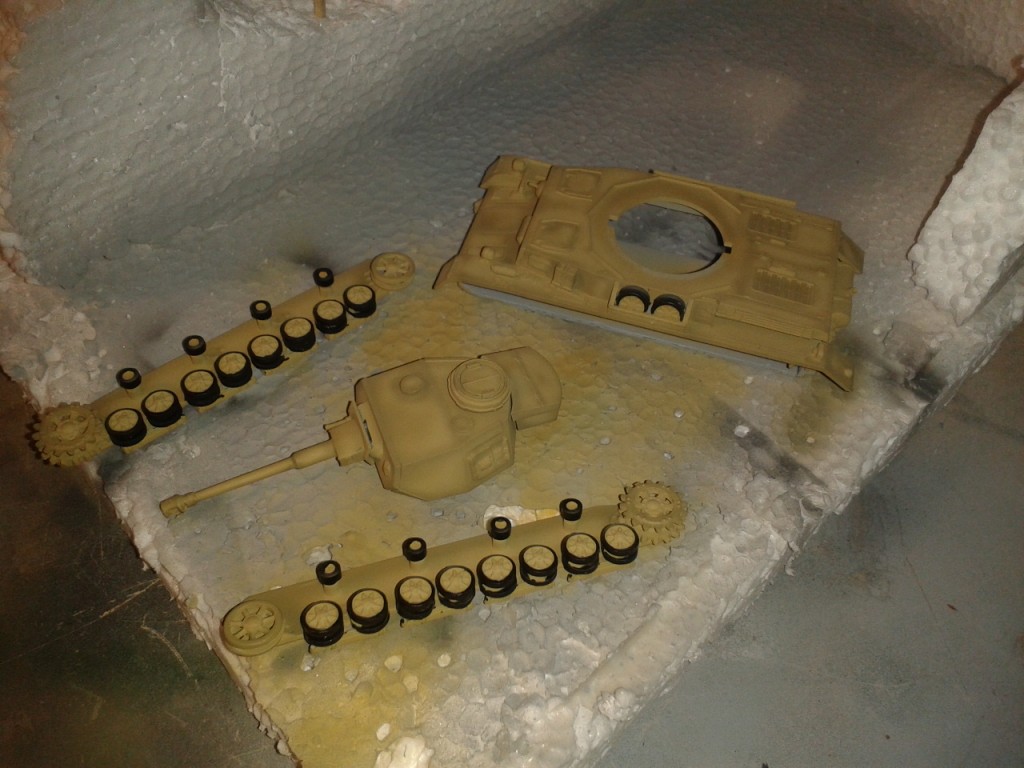 Once dried paint the rubber wheels with black XF-1 tamiya and details of tools, pick and shovel with silver and brown handles. 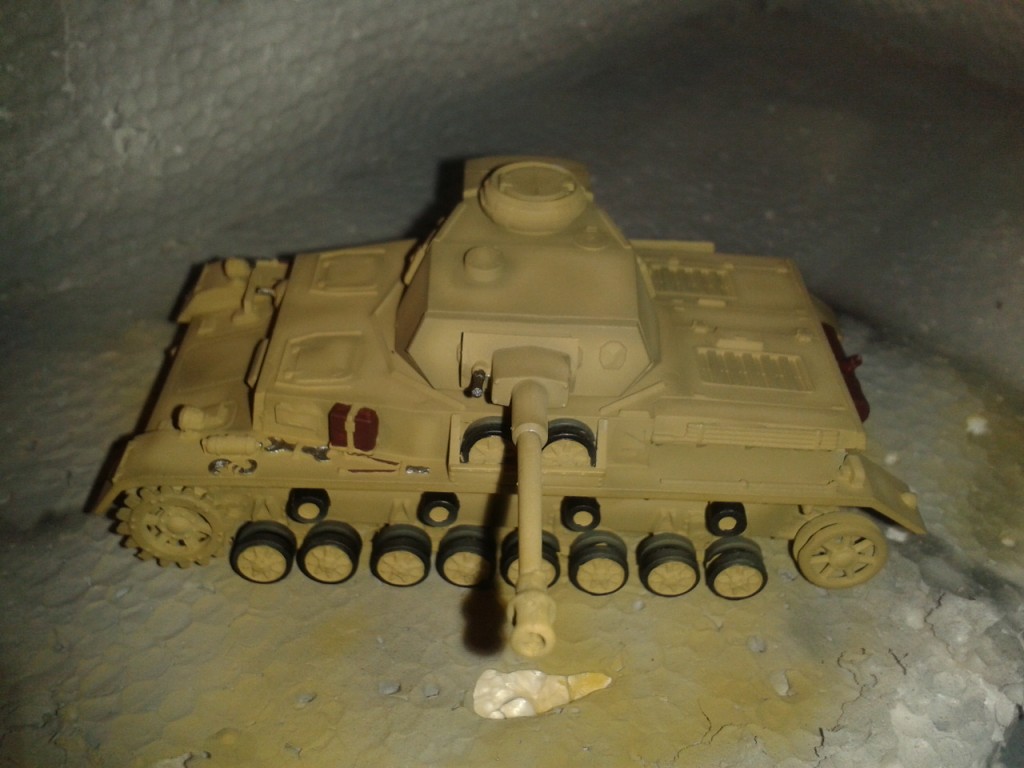 We hope to dry and give an old-gloss varnish to protect all work done and proceed to place the decals, with liquid Micro Set and Micro Sol. 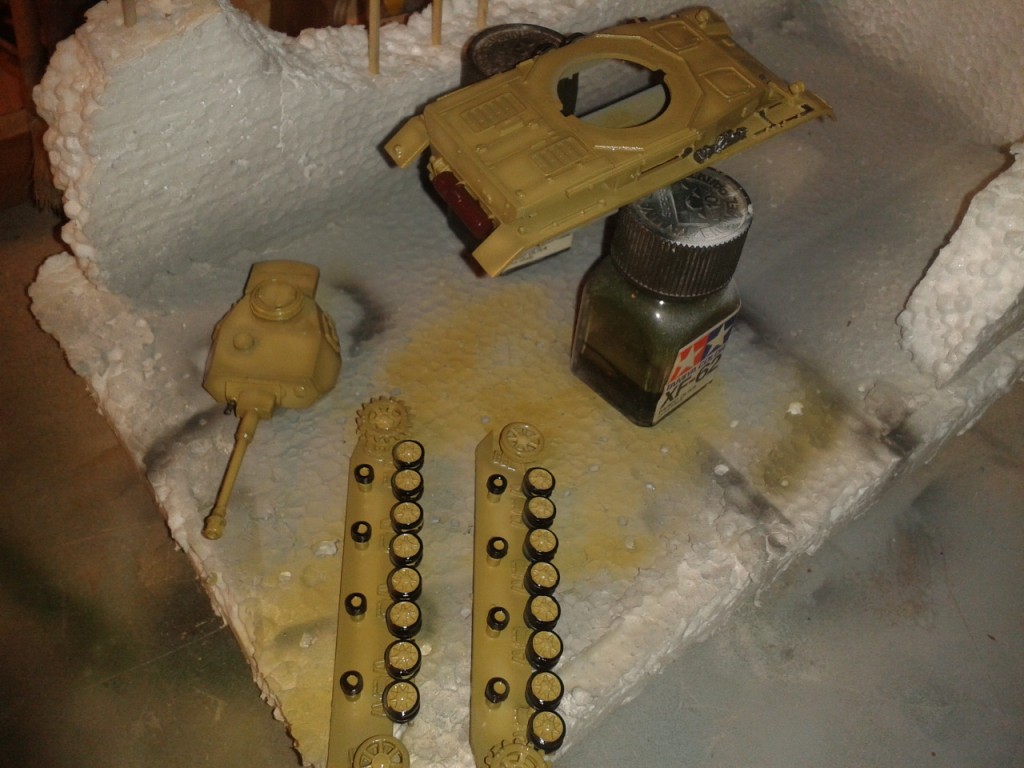 Let it dry a 24 hours for the paint is fully dry and started applying the decals which correspond. 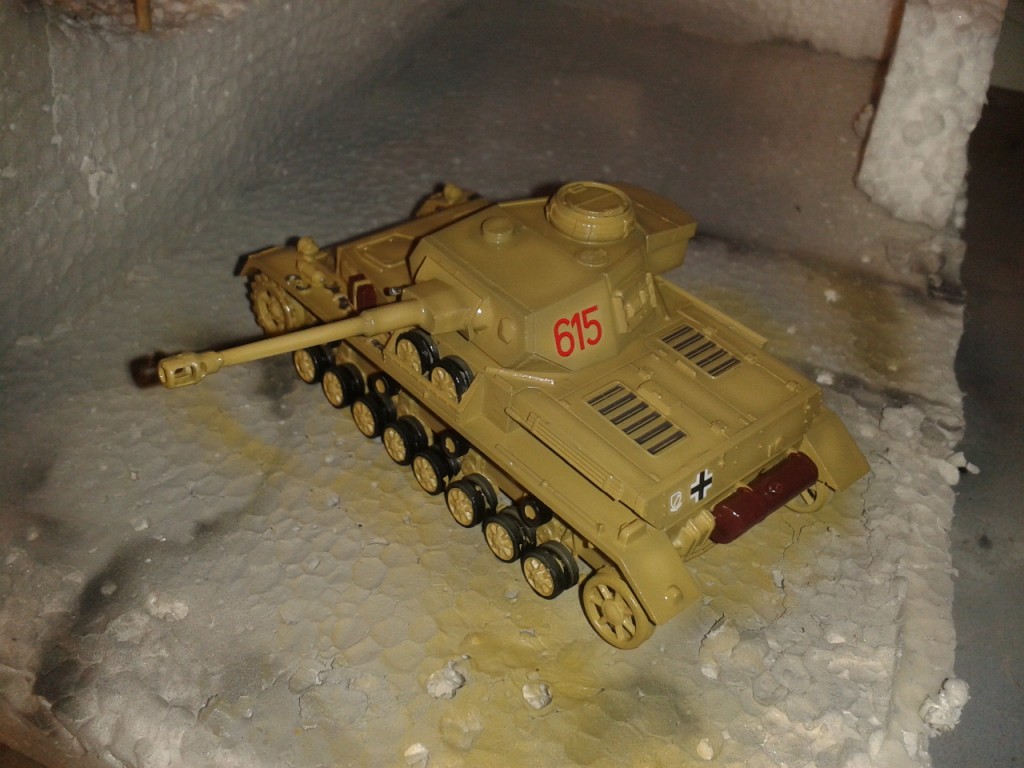 When the decals are well dry apply another coat of gloss varnish to protect and proceed to create some effects wear, with the sponge technique I apply a dark brown in parts of the chassis to simulate Panzer oxides that have been created by moisture and uncorking painting during battle or use. 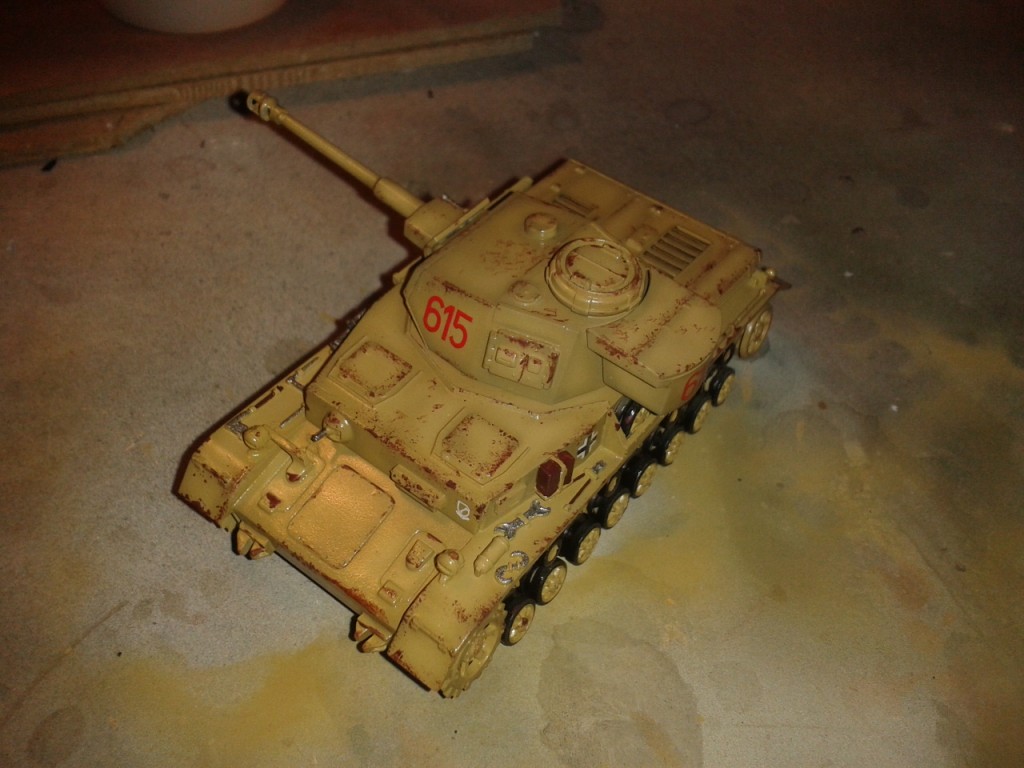 We will proceed to create the white winter camouflage with Tamiya XF-2, before applying the layer airbrush, apply a thin coat of lacquer, which is used for the metered airbrush hair around the truck chassis and a dry to touch time quickly apply the white diffusing inside out corners. 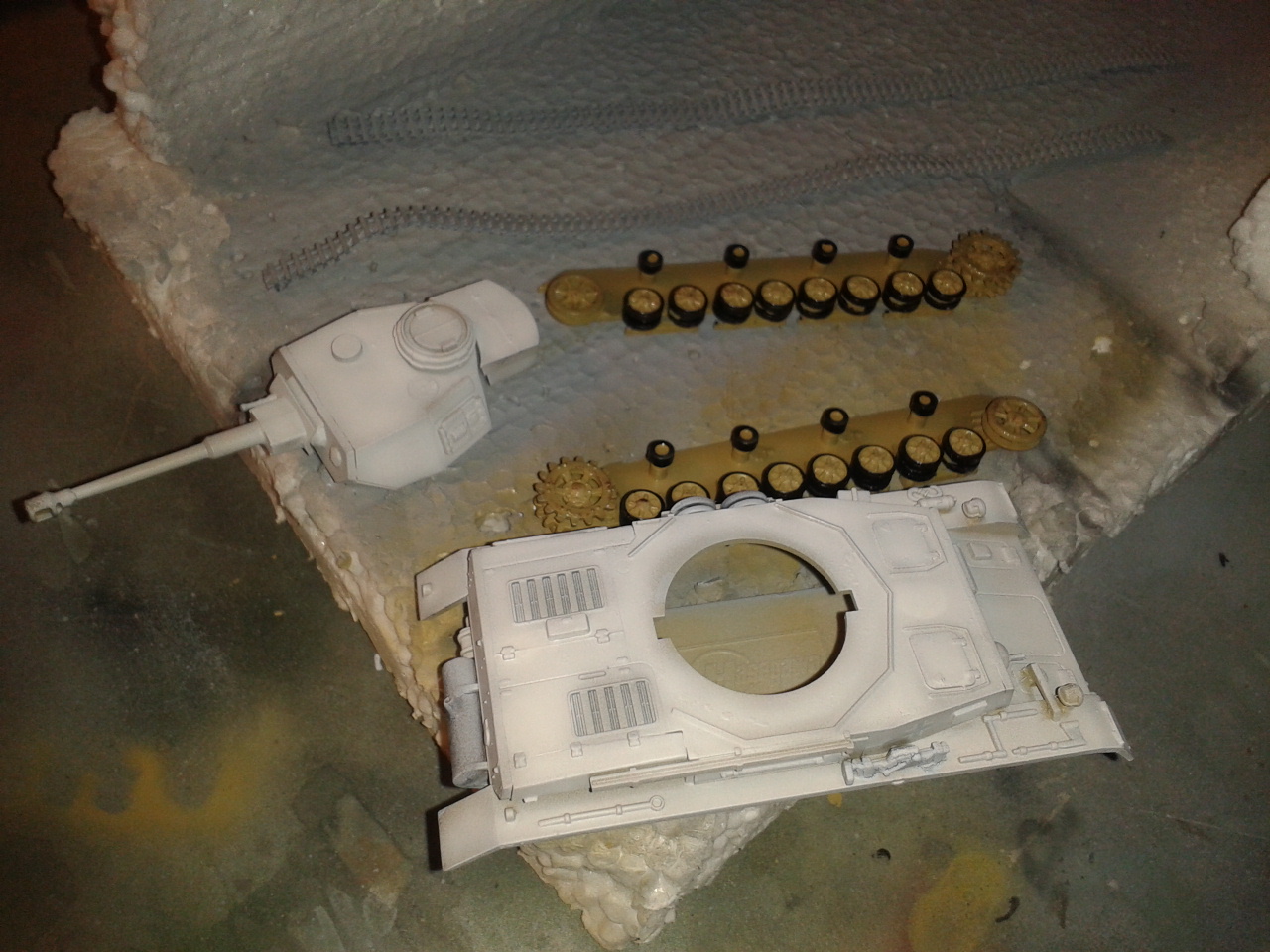 Let it dry to the touch and when the time arrived with a brush with water dip surfaces to remove the layer of white, then cojemos stiff bristle brush and started to rub in the direction of friction that would produce the descorches.

Once the process is completed uncorked let dry, as we proceed to paint the chain drive system with a dark brown, I usually use the same one used in descorches and assemble the panzer. 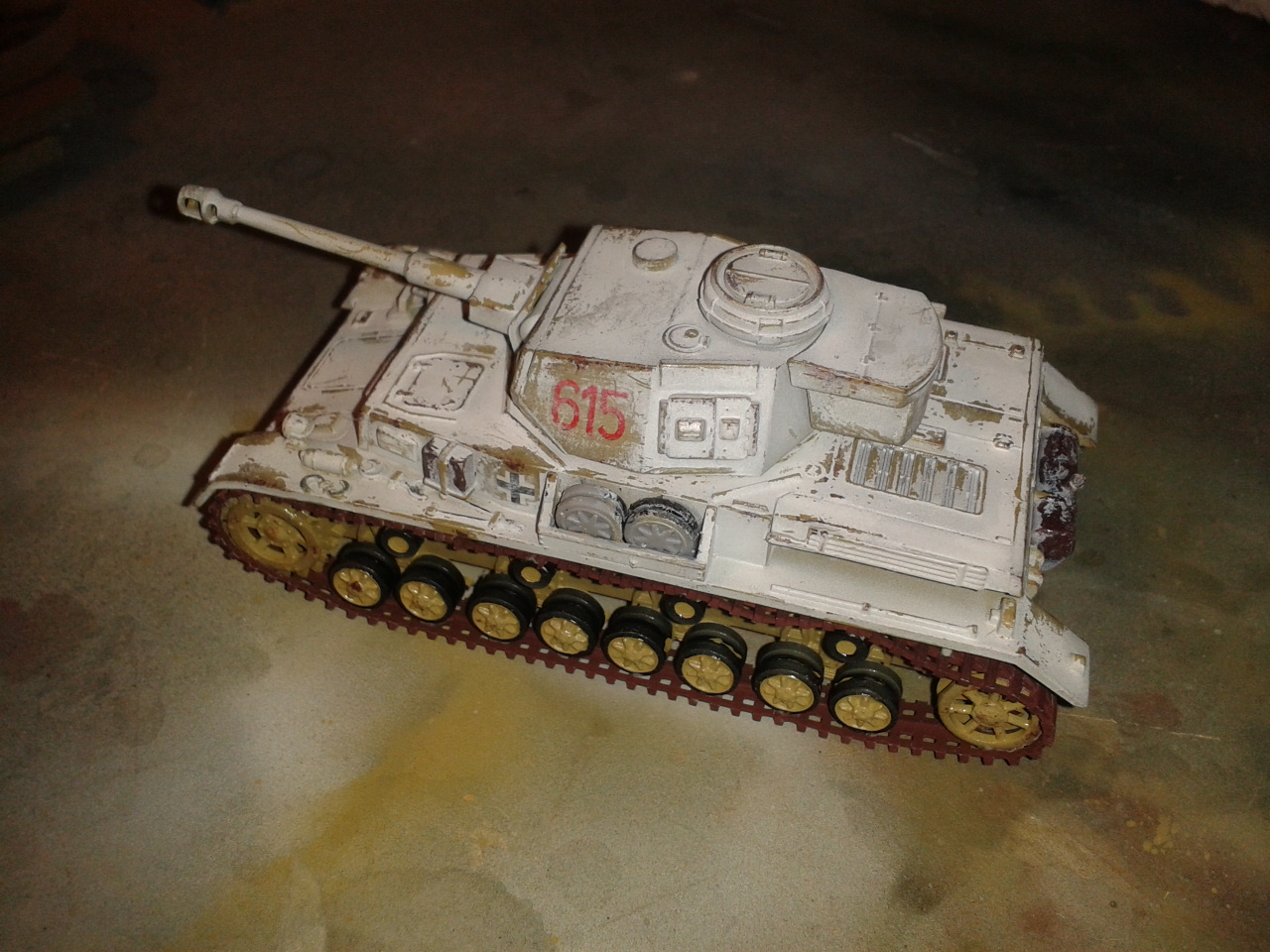 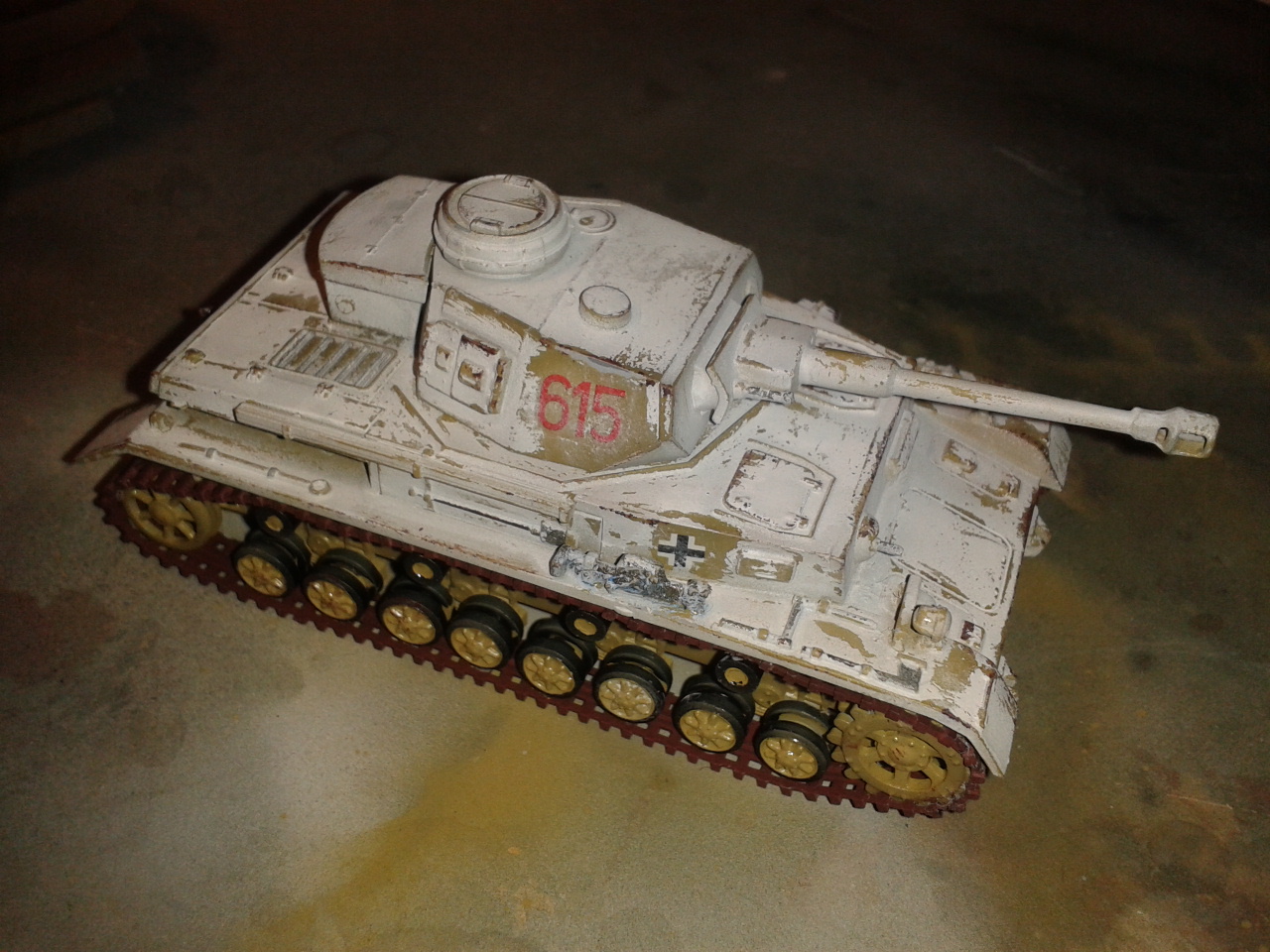 We now proceed to protect the white coat with the effects of uncorking with a thin coat of gloss varnish and then begin with the washings. 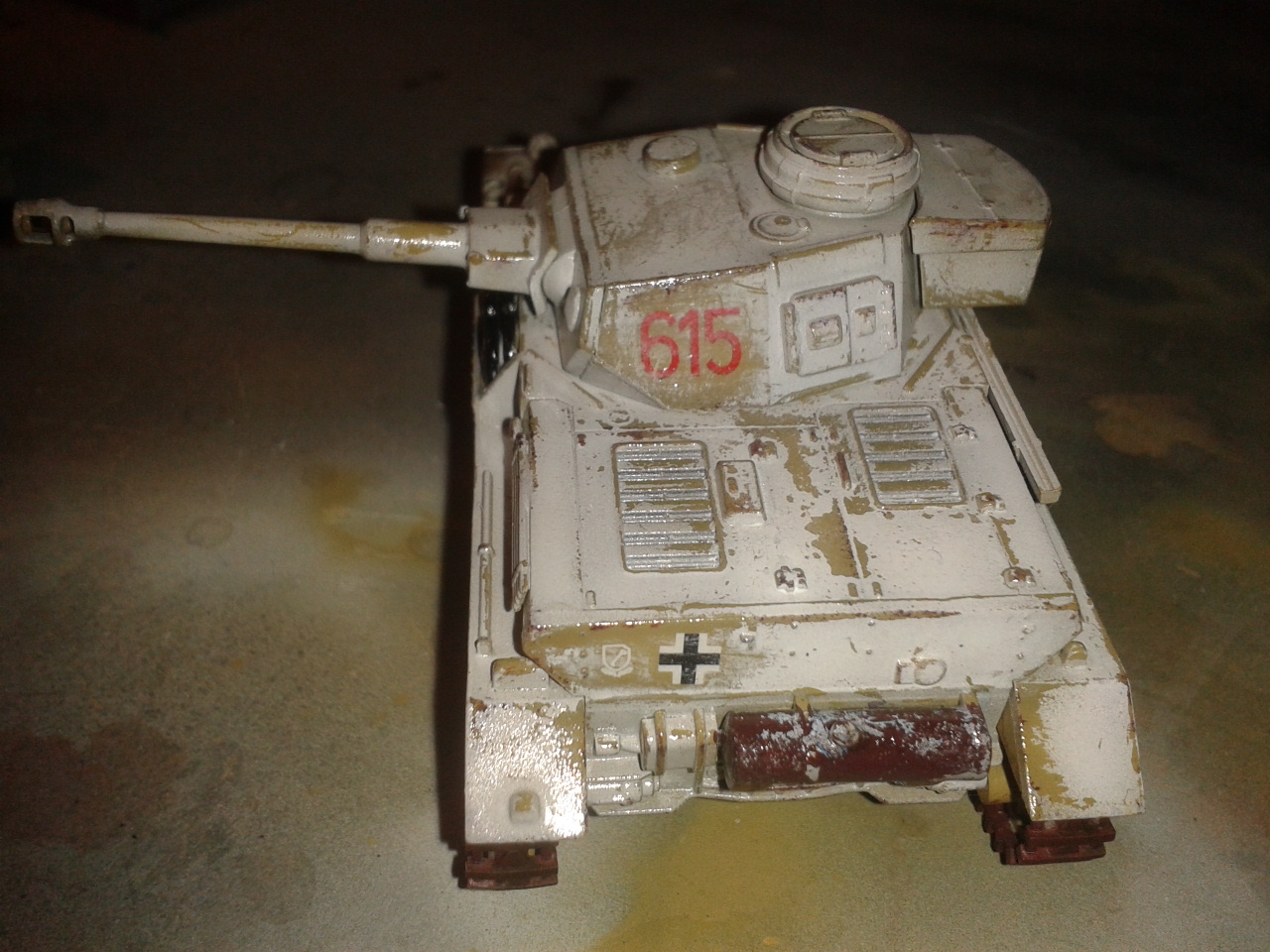 Apply a wash in oils of black color to highlight the panels, small door and deepest corners of the model, once applied with a brush will clean off any excess or a stick also serves to cleanse the ears, but sometime you can leave some other annoying fluff then you have to remove with a pizas. 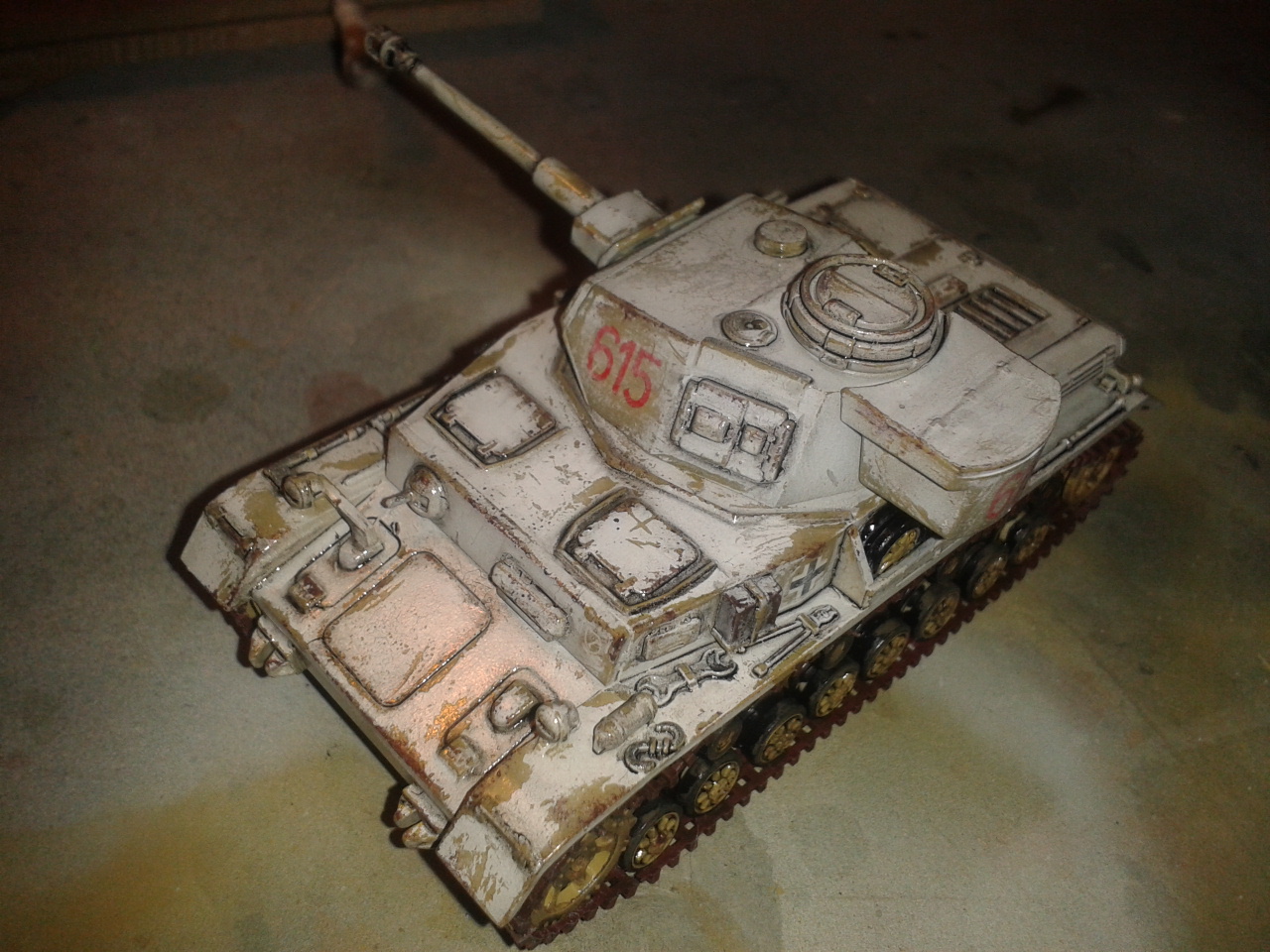 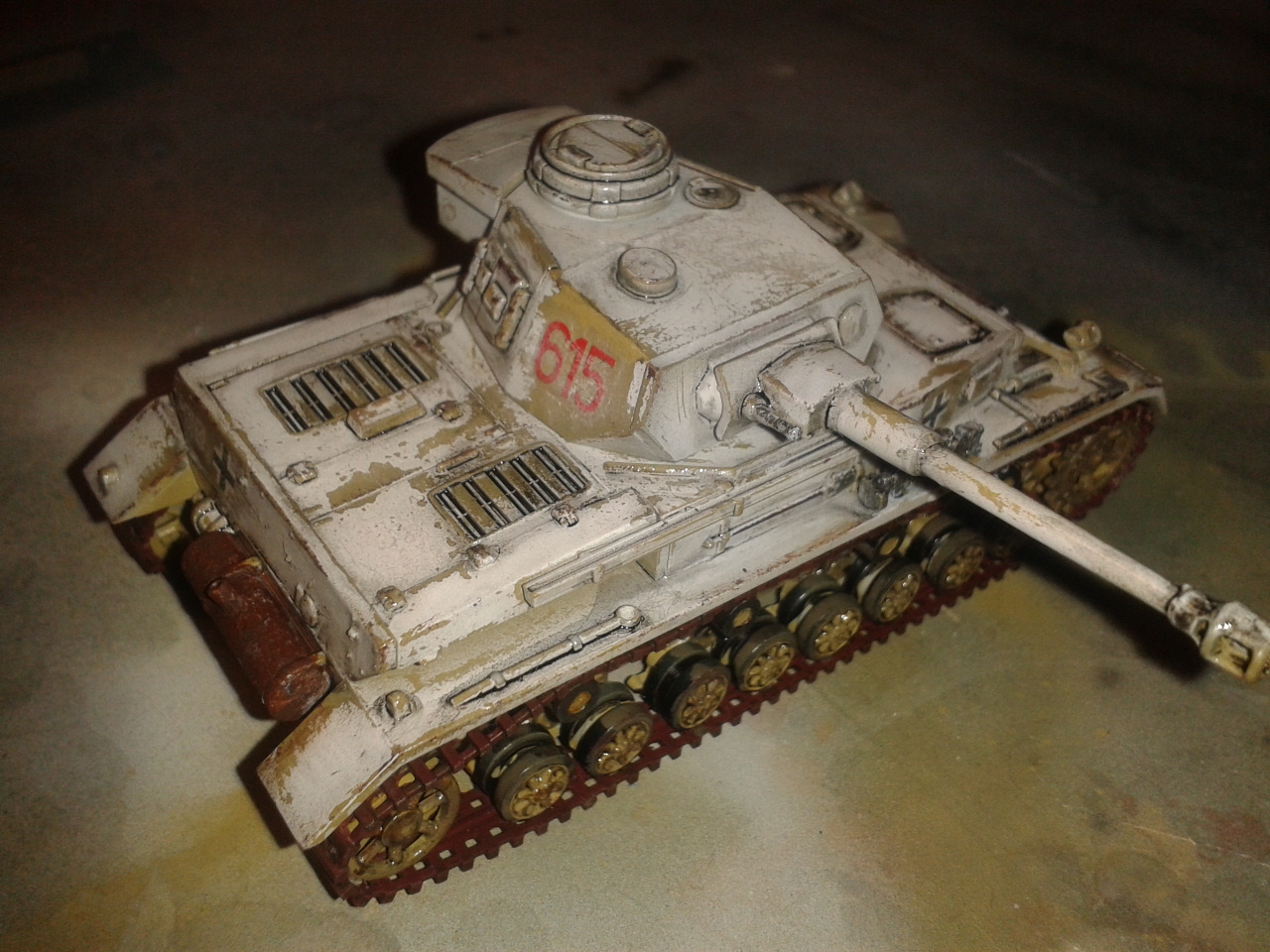 Once dry the oil it on thick with a past of matte or satin varnish and let dry. 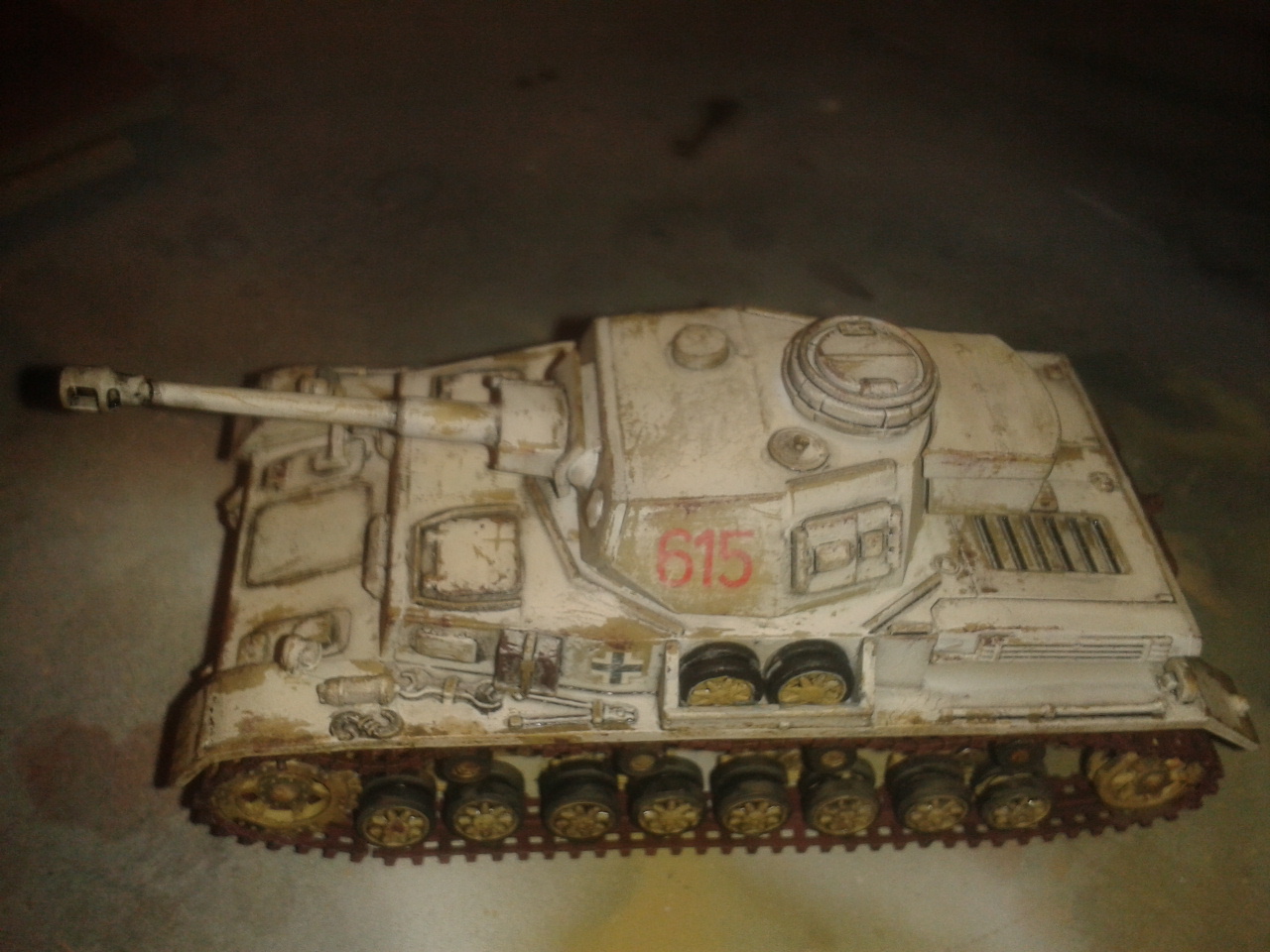 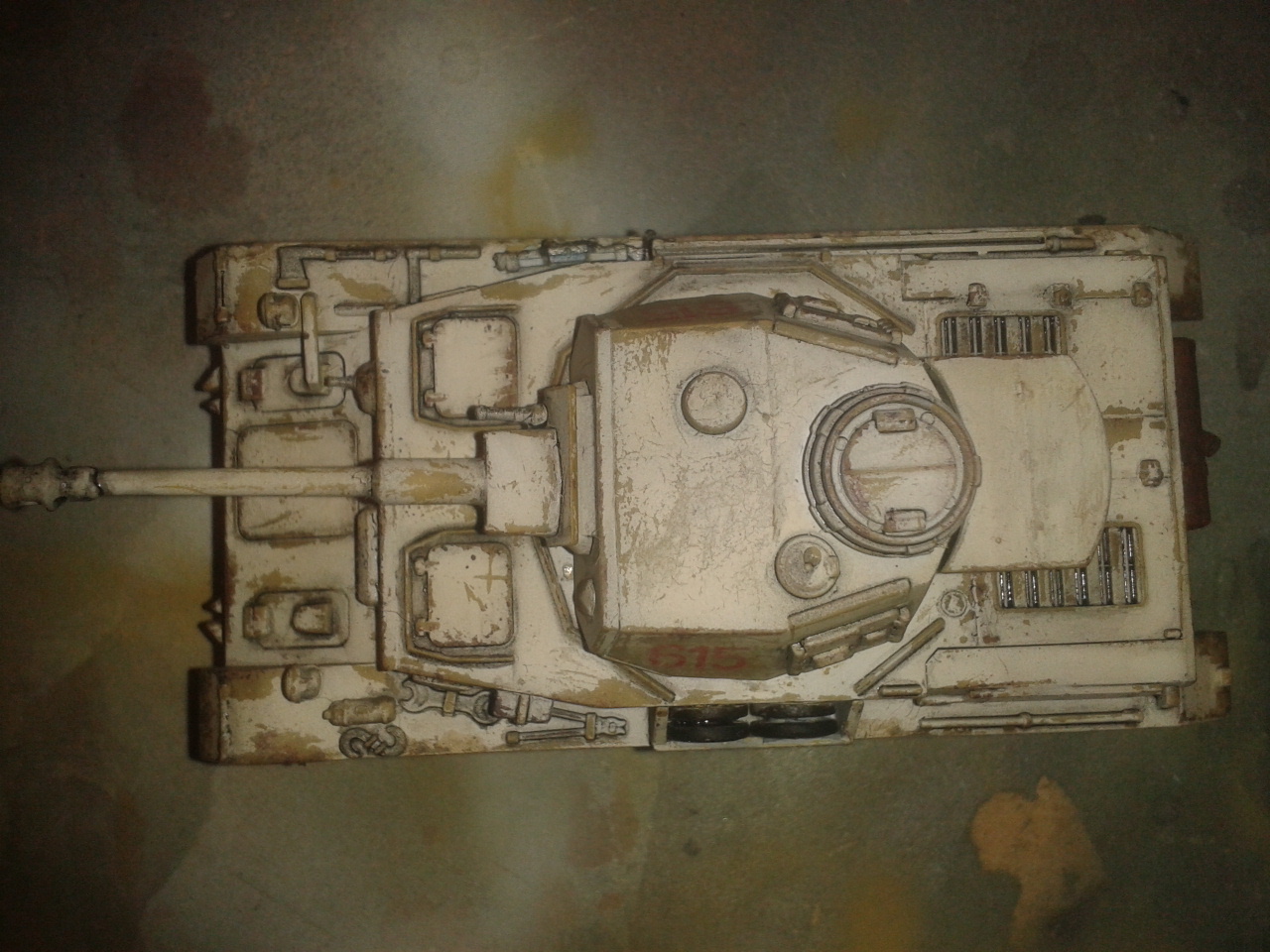 Then I apply a little pigment brown tones across the underside of the Panzer, drive system, and lower to simulate the fender and embedded dirt left by the passage of mud flooded road. 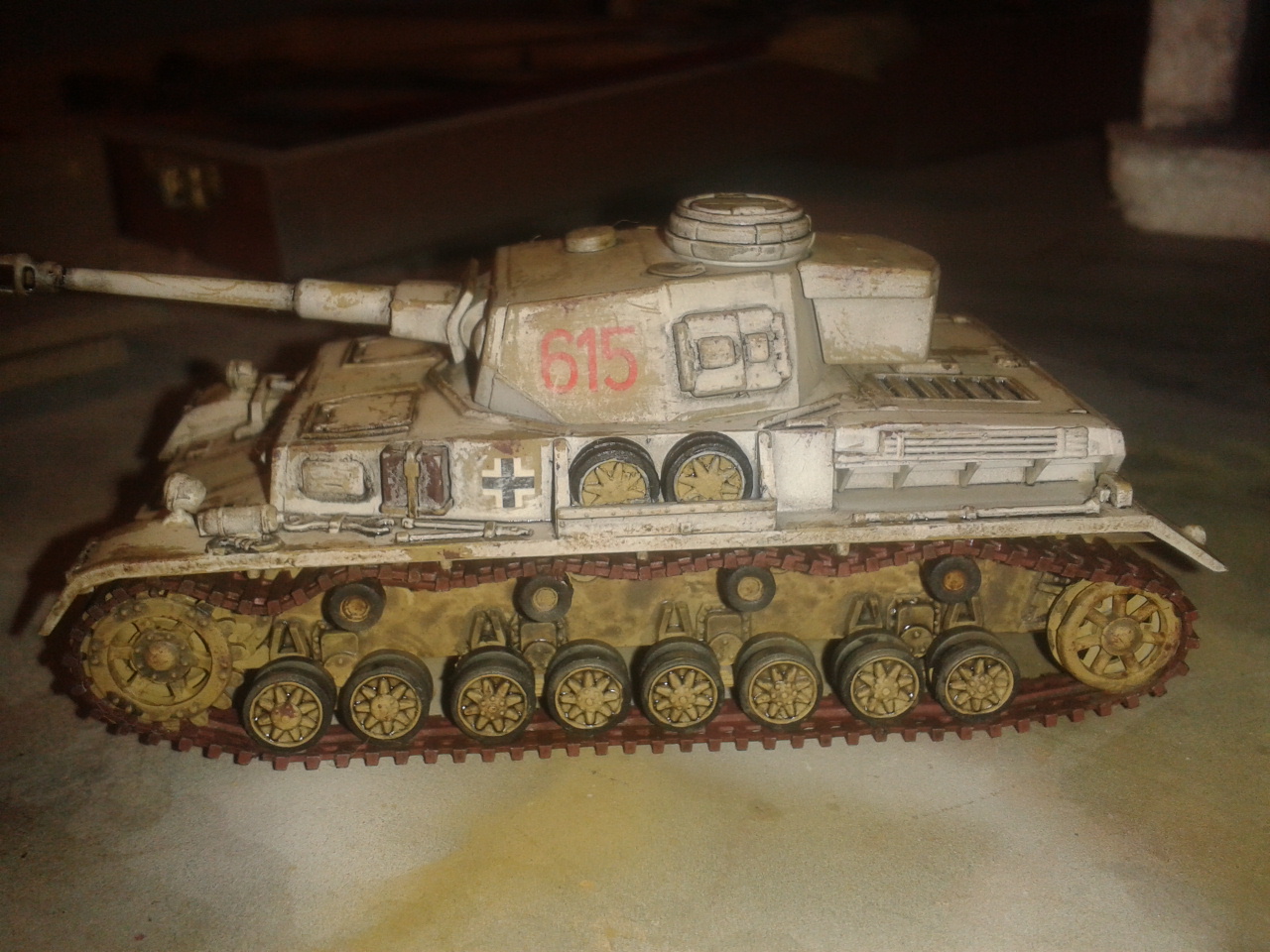 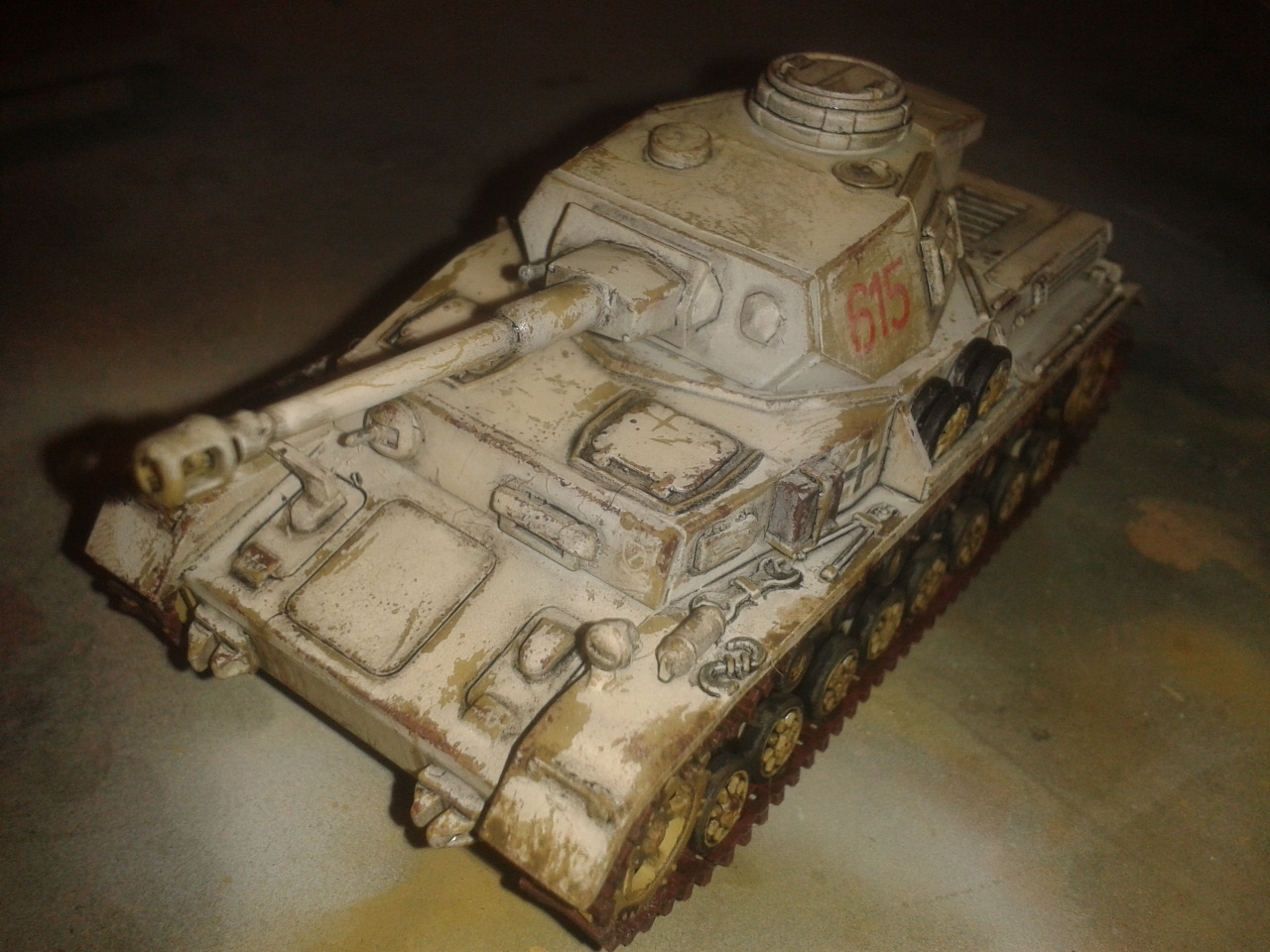 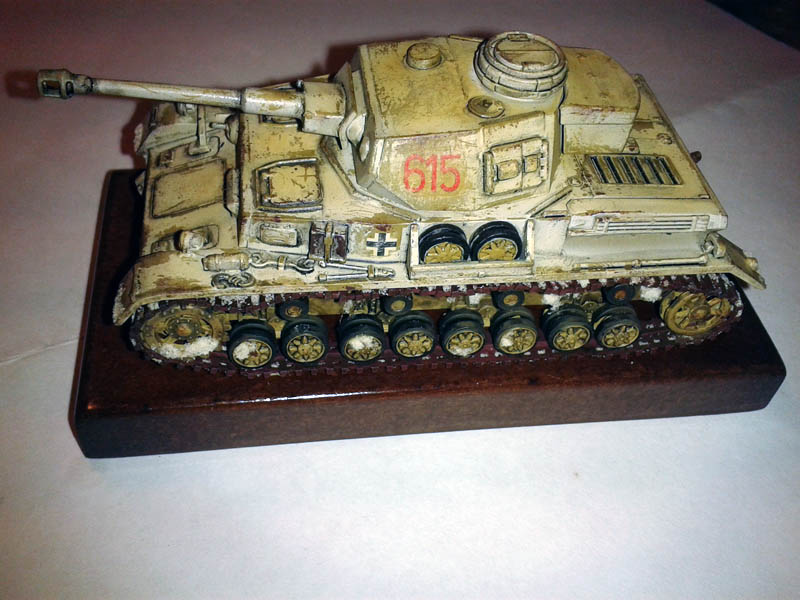 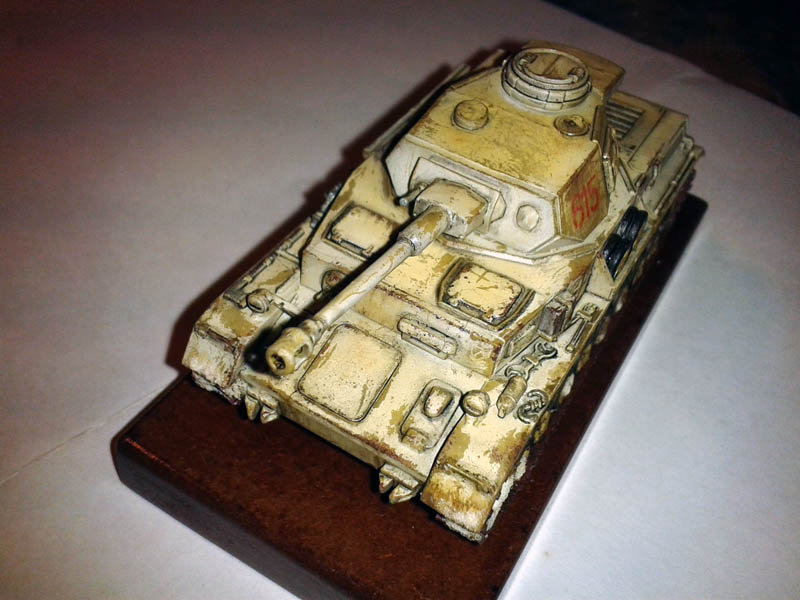 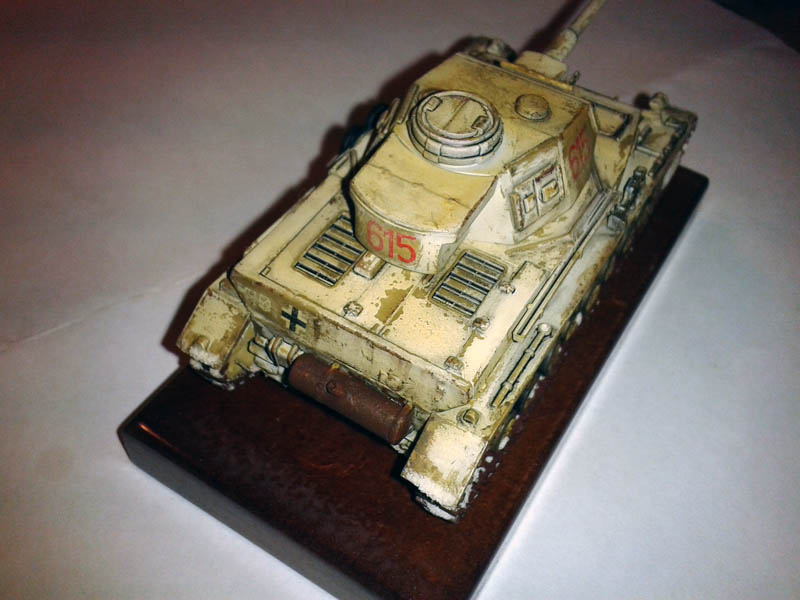