Taking advantage of an offer 2X1 in a string of toys, buy the kits Hasegawa Panzer IV and Tiger I .E, a scale 1:72, the latter is one of the German cars that I like by the Stug III, I could not resist and started with the assembly to perform work with two-color camouflage, yellow sand and green, the kit in question is that I present: 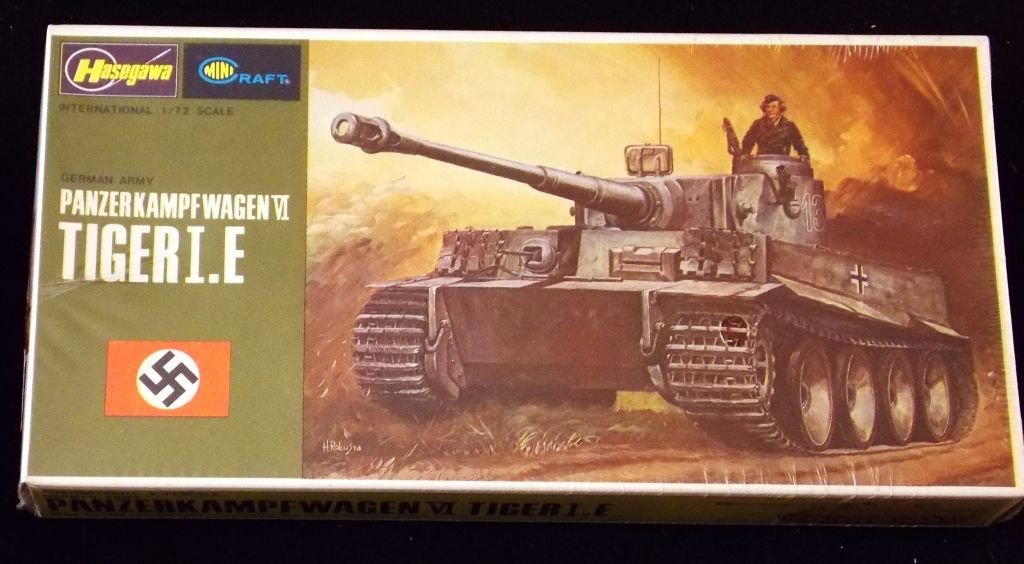 A little history on Tiger I one of the best built by the Third Reich German tanks: 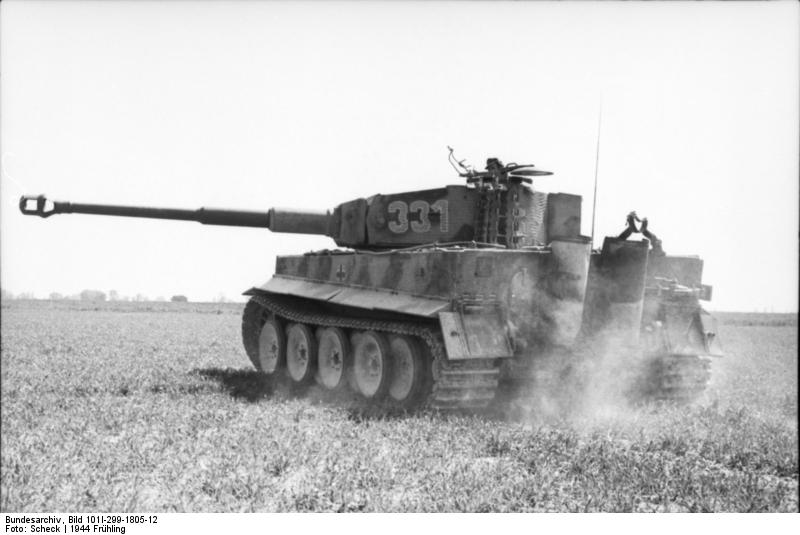 Tiger I is the name by which is usually known a German heavy tank developed in 1942 and used in World War II as last official German designation was Panzerkampfwagen Tiger Ausf. And ('Tiger armored fighting vehicle variant E'), often abbreviated as Tiger. The nickname of the tank was placed by Ferdinand Porsche, and the Roman numeral was added after the Tiger II went into production. The first official German designation was Panzerkampfwagen WE Ausf. H, but the name in March 1943 was changed to Panzerkampfwagen VI Tiger Ausf. And. The inventory designation German military vehicles for this tank was Sd.Kfz. 181.

It was an answer to the unexpectedly formidable force Soviet armored found in the first months of Operation Barbarossa, particularly the T-34 and KV-1. The Tiger I gave the Wehrmacht its first tank equipped with cannon 88 mm, which had previously demonstrated its effectiveness against both air and ground targets. During the course of the war, Tiger I saw combat on all fronts battle that had Germany. Usually was deployed in independent tank battalions, where he proved to be a formidable.

Beginning with the assembly process I decided to remove the front fenders and side, as if he had lost because of time and input in combat, the side pieces are loose so the problem is minimal just have to do without them but the front fenders are part of the body so you have to sawing a and for this I used an electric saw to modalism, although you could also use a manual with a little more work. 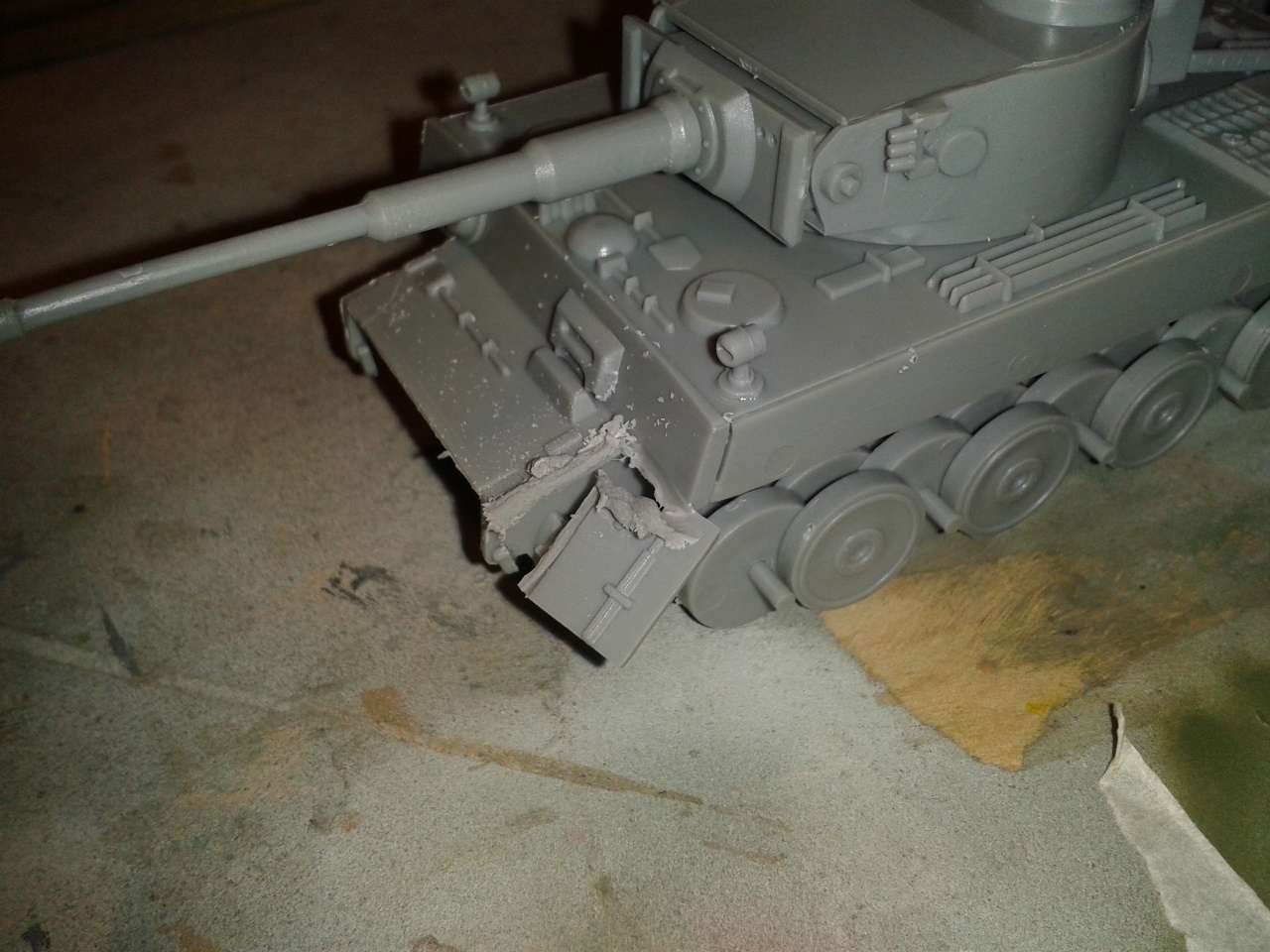 Once all well sanded and polished ready for priming, we apply a coat of gray primer and let dry a Vallejo 24 hours.

A few hours we give the first pass of his yellow based color desert XF-59, as always I use Tamiya colors, and let it dry and then apply a mixture of the same color and some black XF-1 to darken, apply on all edges, edges and dark areas. 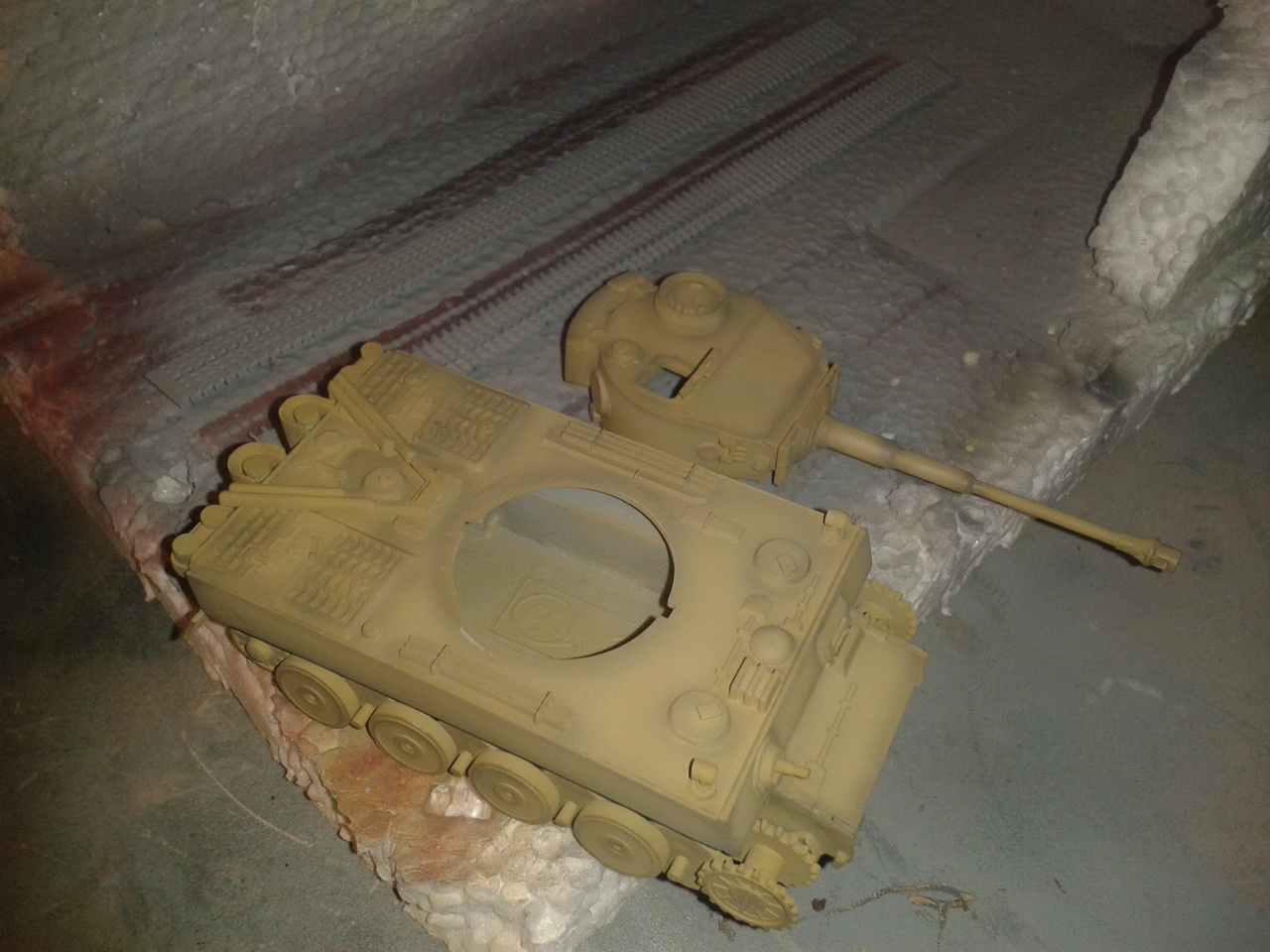 The next step is to paint all accessories, details and other parts to be colored, as machine guns (Metal Grey), Mangos picks and other tools wood (Brown), tires of the drive wheels and other accessories in black. 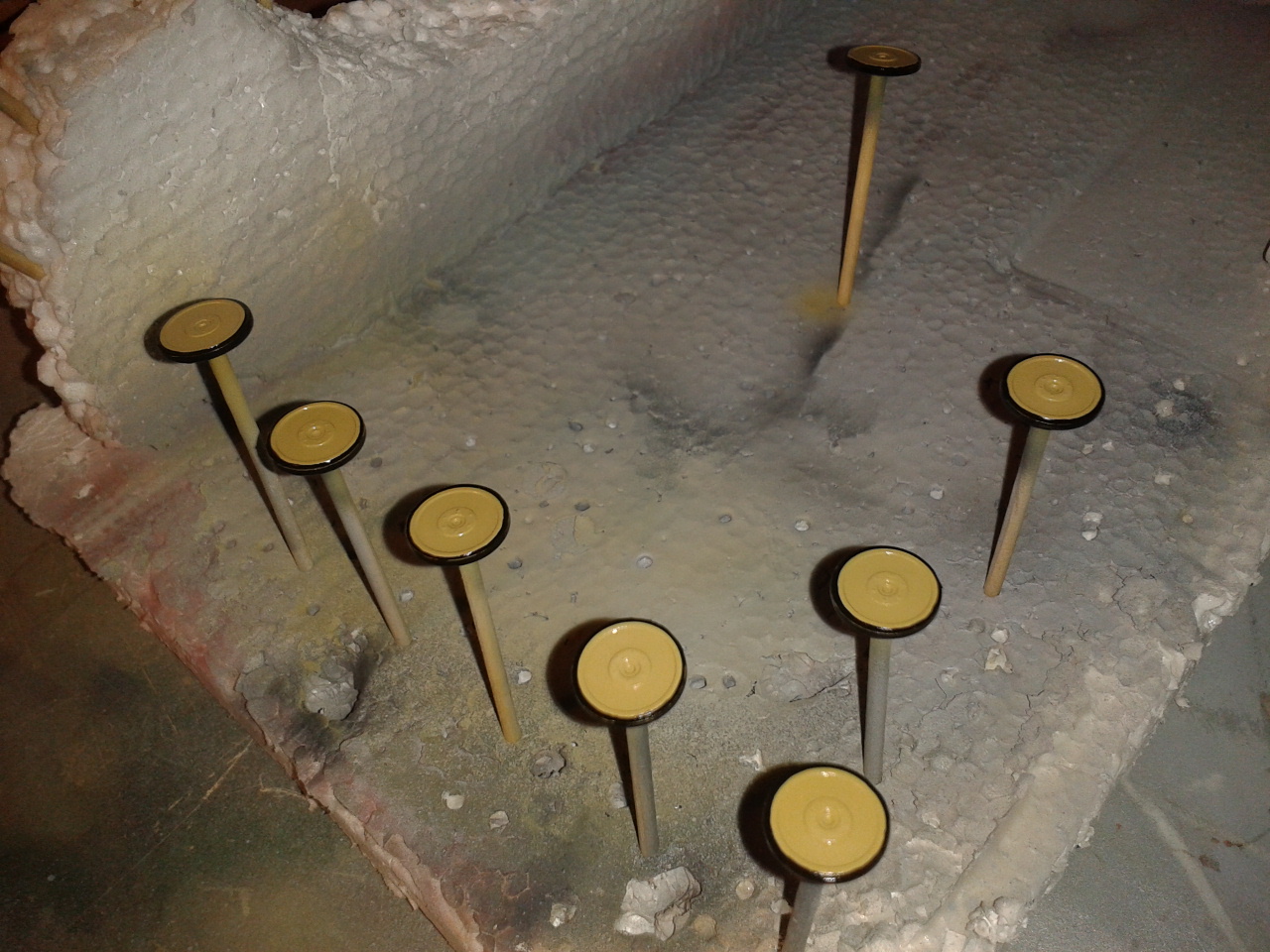 Once everything is dry with the sponge technique applied a little rusty brown to simulate descorches around the panzer. 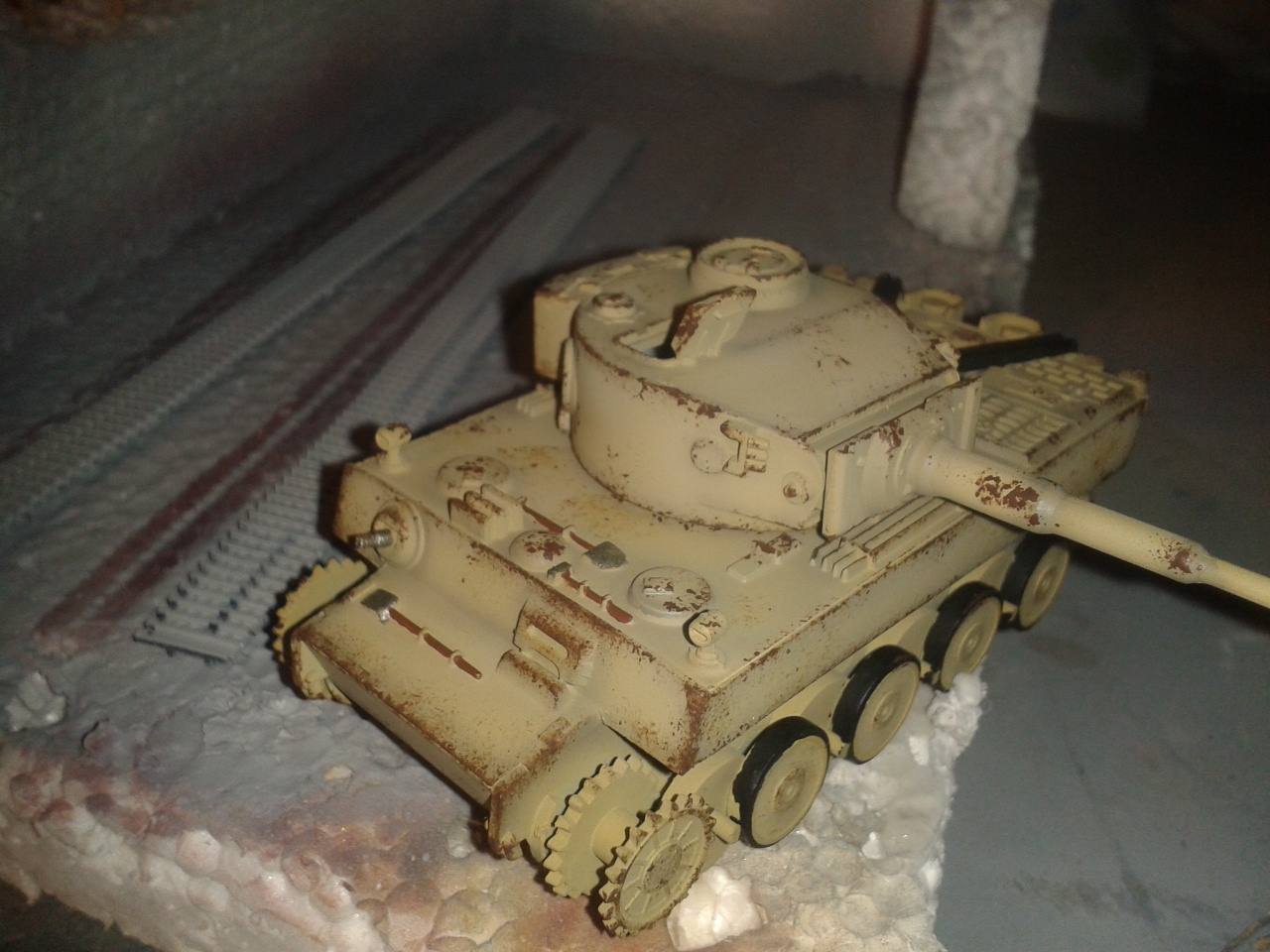 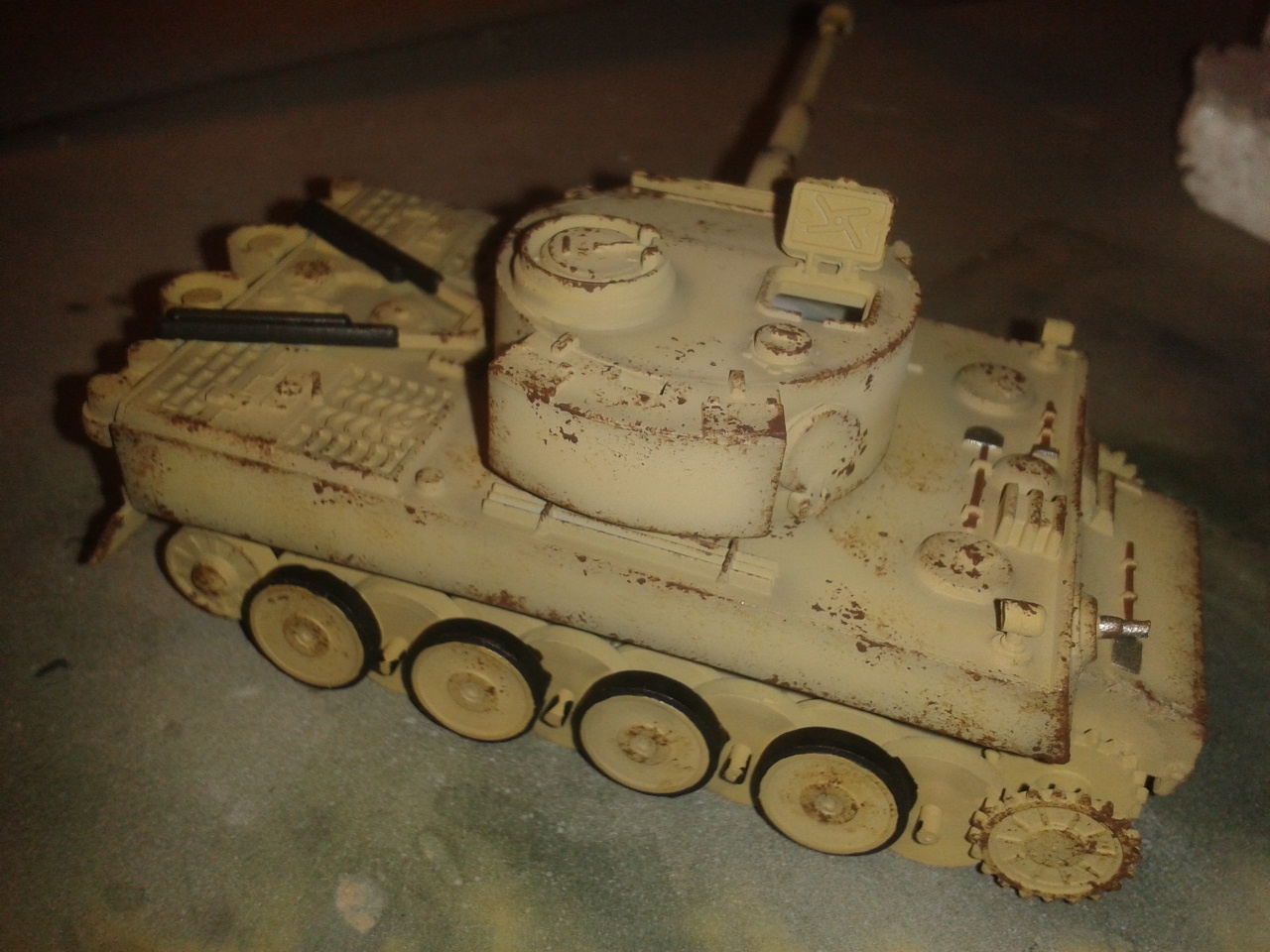 Once completed and drying protect the paint job by applying a coat of gloss varnish to the entire model. 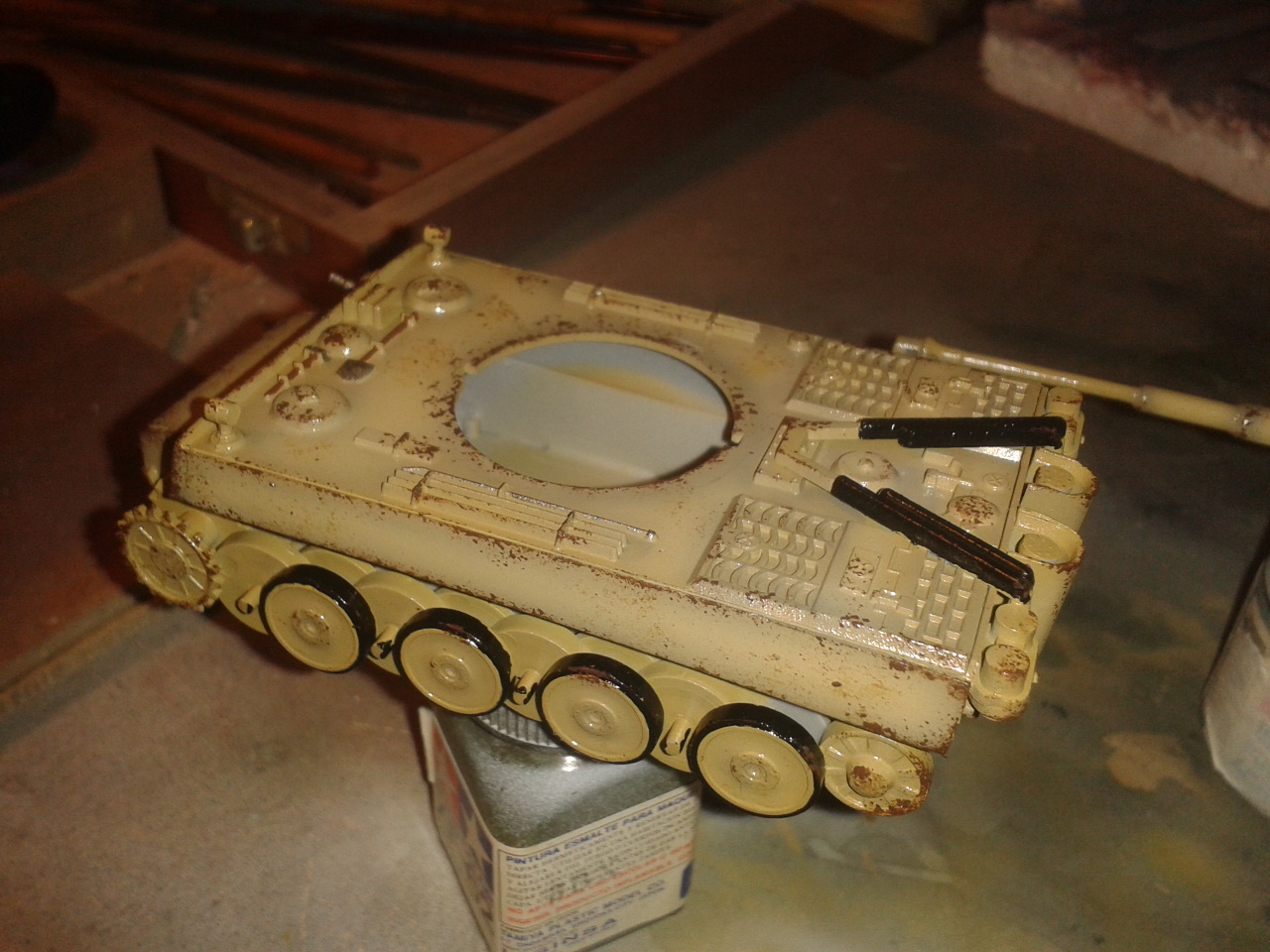 We apply the Tiger I turret. 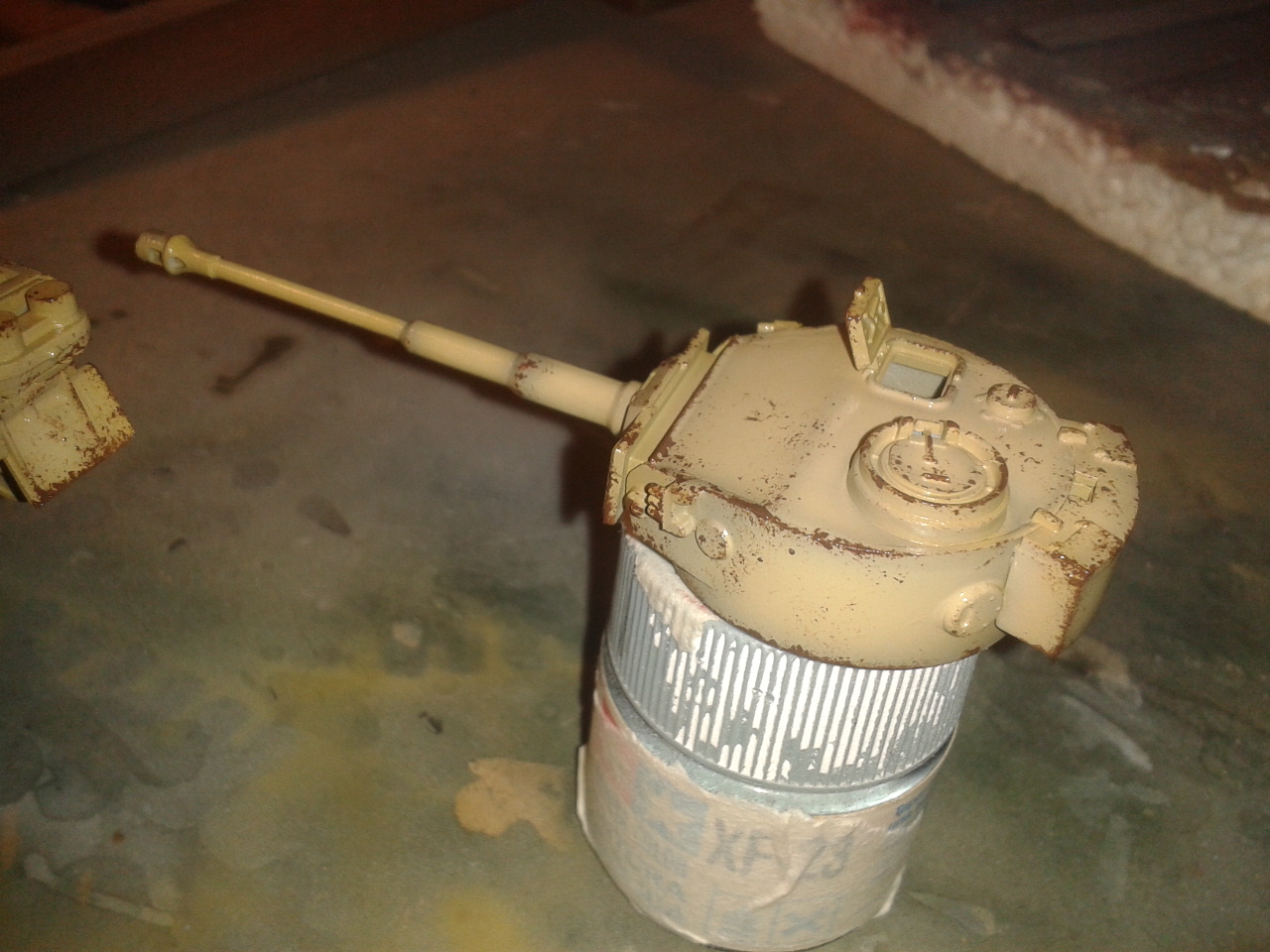 As I perform with a camouflage pattern which has been applied to the entire cart, but the missing pieces side protection we have to simulate cutting painting lose these pieces and expose the original painting, so we cover the sides with masking tape / bodybuilder horizontally and then apply green camouflage. 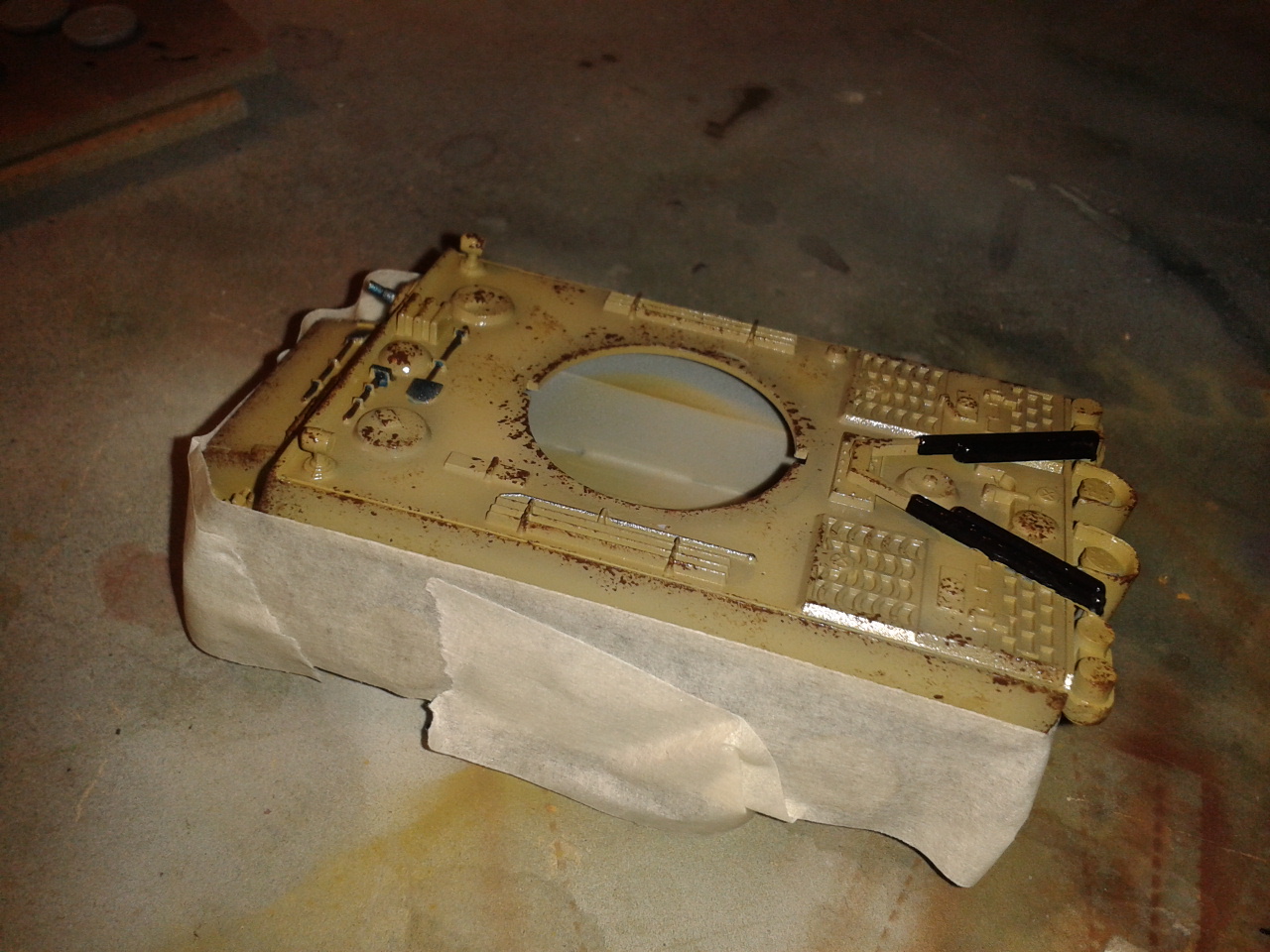 Applied with airbrush camouflage lines in green on all inclusive Panzer upper turret side, front and rear parts, but before that I sprinkle the whole car with a thin layer of lacquer and then to simulate wear camouflage paint on, which performed removing paint with a stiff brush rinsed in a little water.

This is the final result. 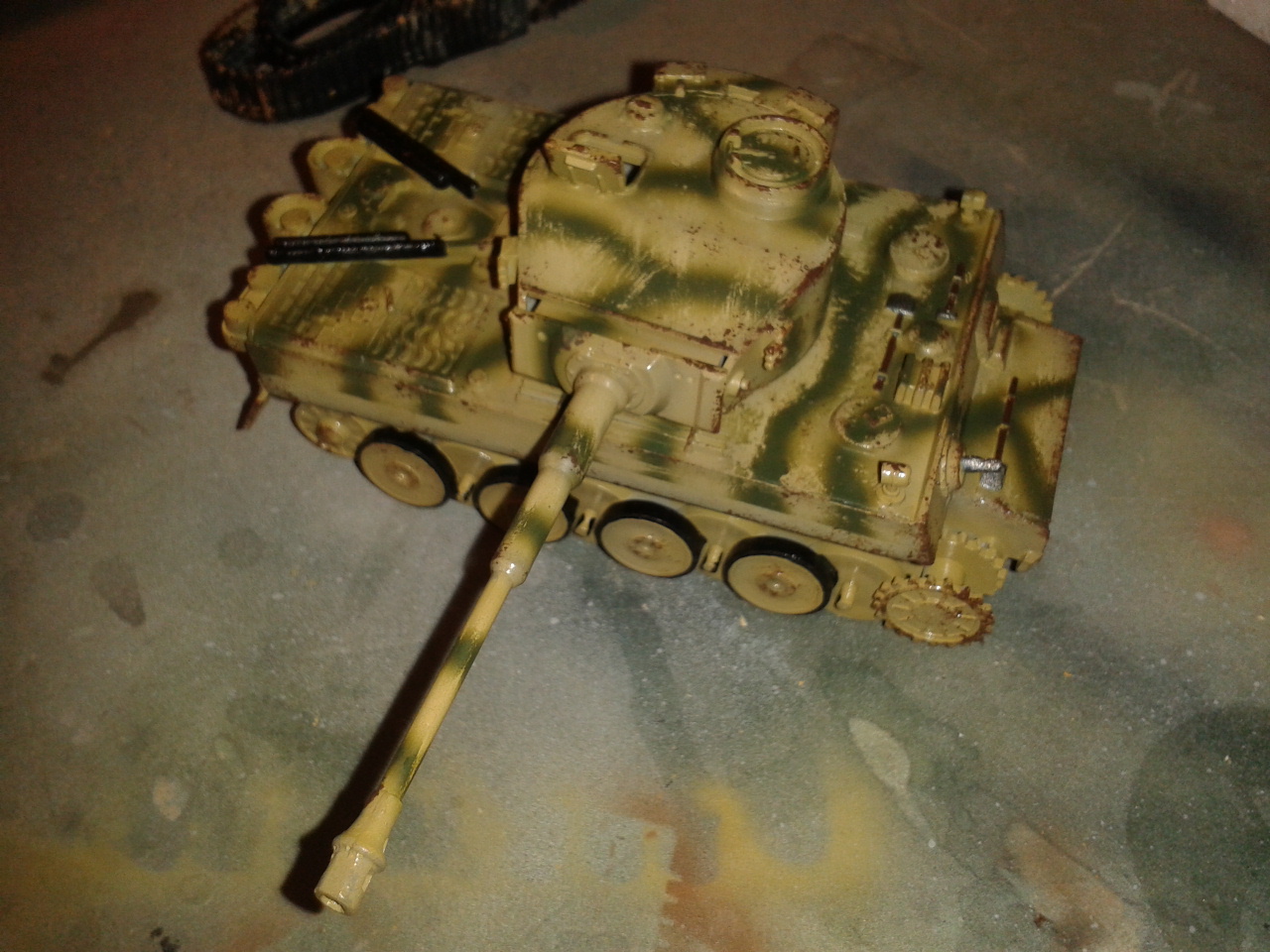 Let it dry a few hours and we started assembling all the pieces missing, outer wheels, turret etc.

Pinto chain drives with brown and hit the Tiger I with droplets SuperGlue.

Once everything is fine paste and dry, I proceed to protect the entire paint job with another coat of gloss varnish and then apply the set MicroSet MicroSol and decals.

Once dry proceed to protecting with another pass of gloss varnish. After a few days to dry apply a wash with oil very diluted black on all corners to highlight Panzer, and panels with engravings. 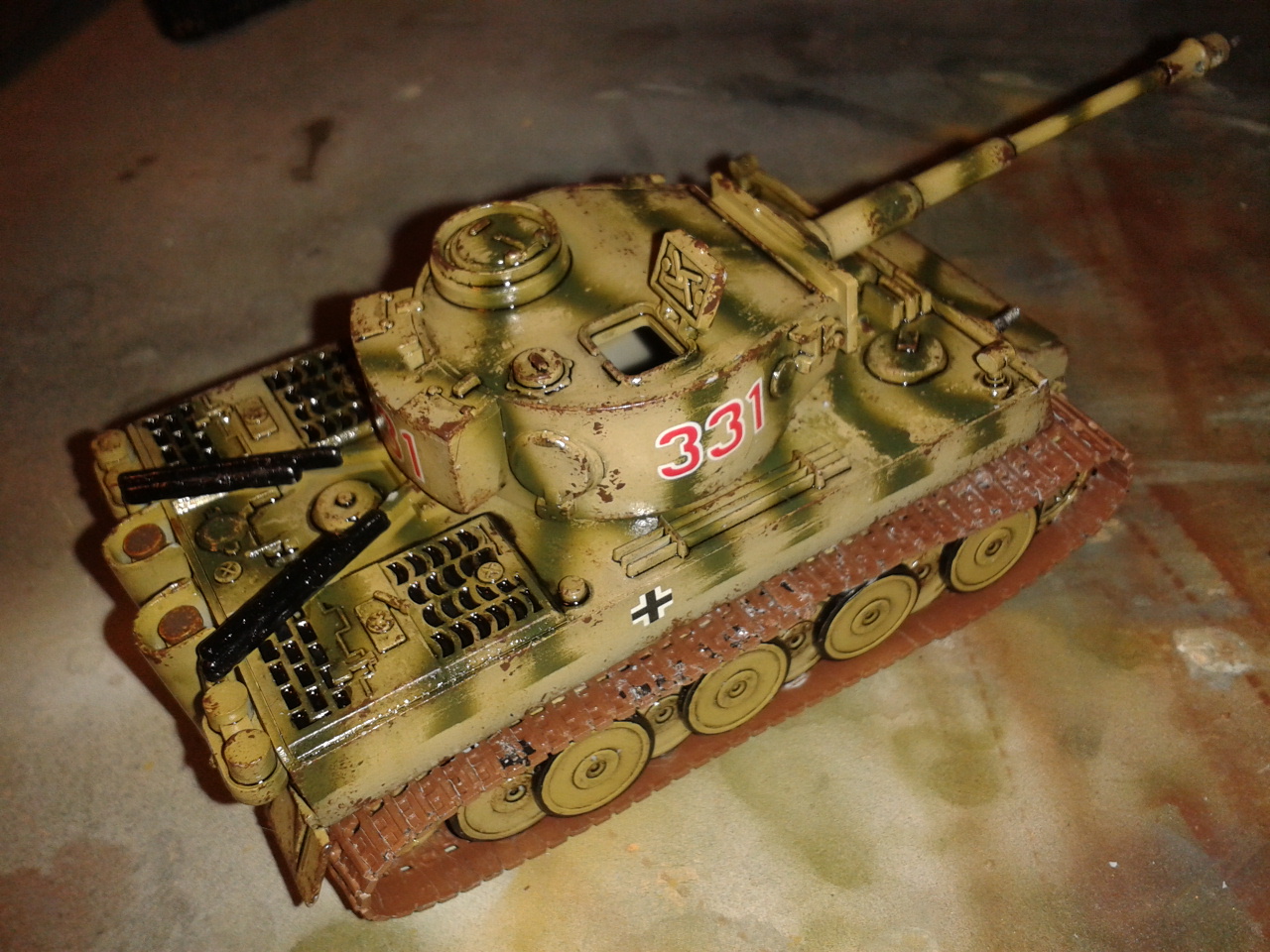 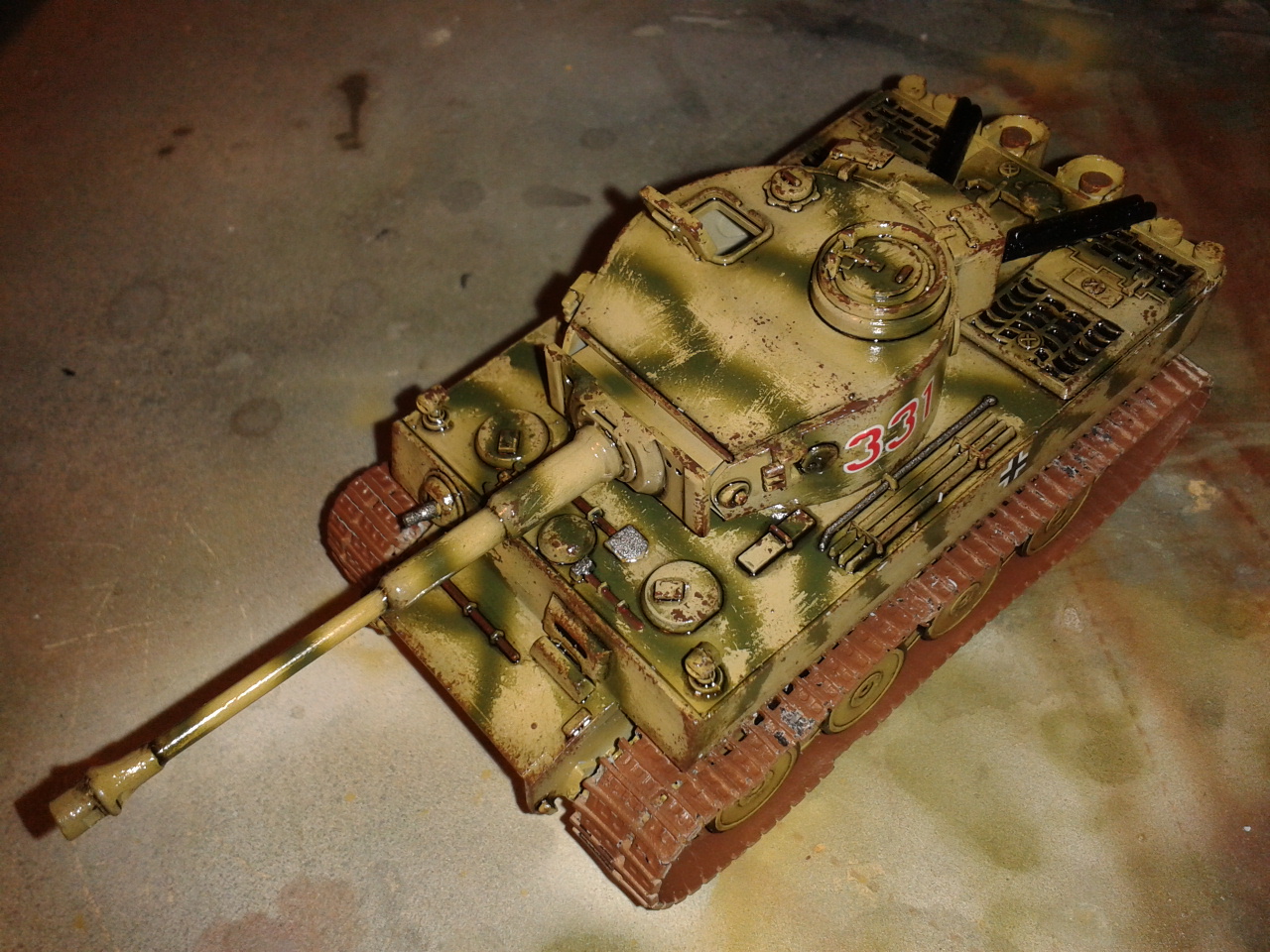 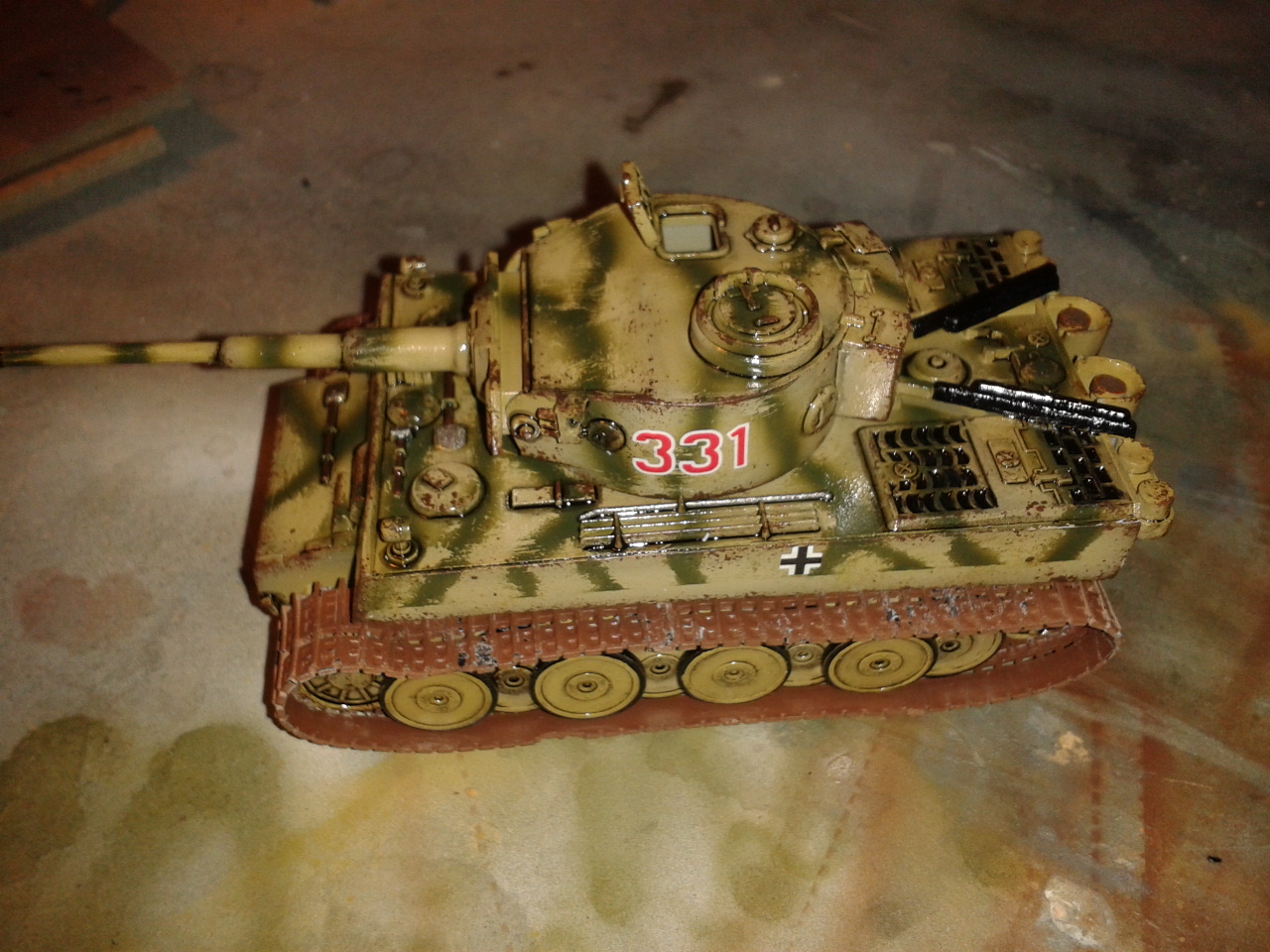 With pigments brown tones and a little black I simulate a bit of dirt on the exhaust pipes of Panzer. 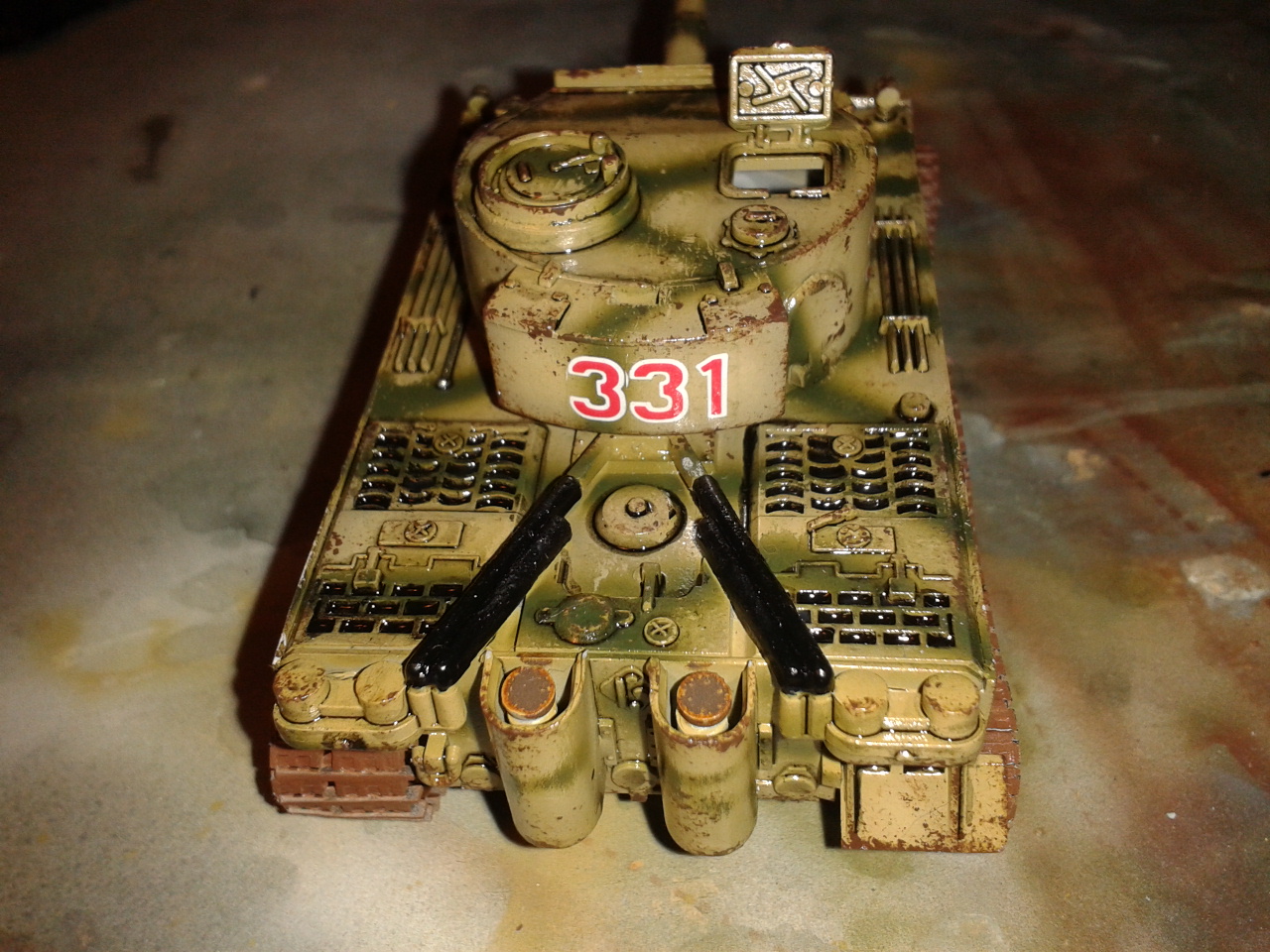 Apply a few washes AK Interactive on the traction chains and a few clear pigments earth tones of the same brand the entire surface of the Panzer. 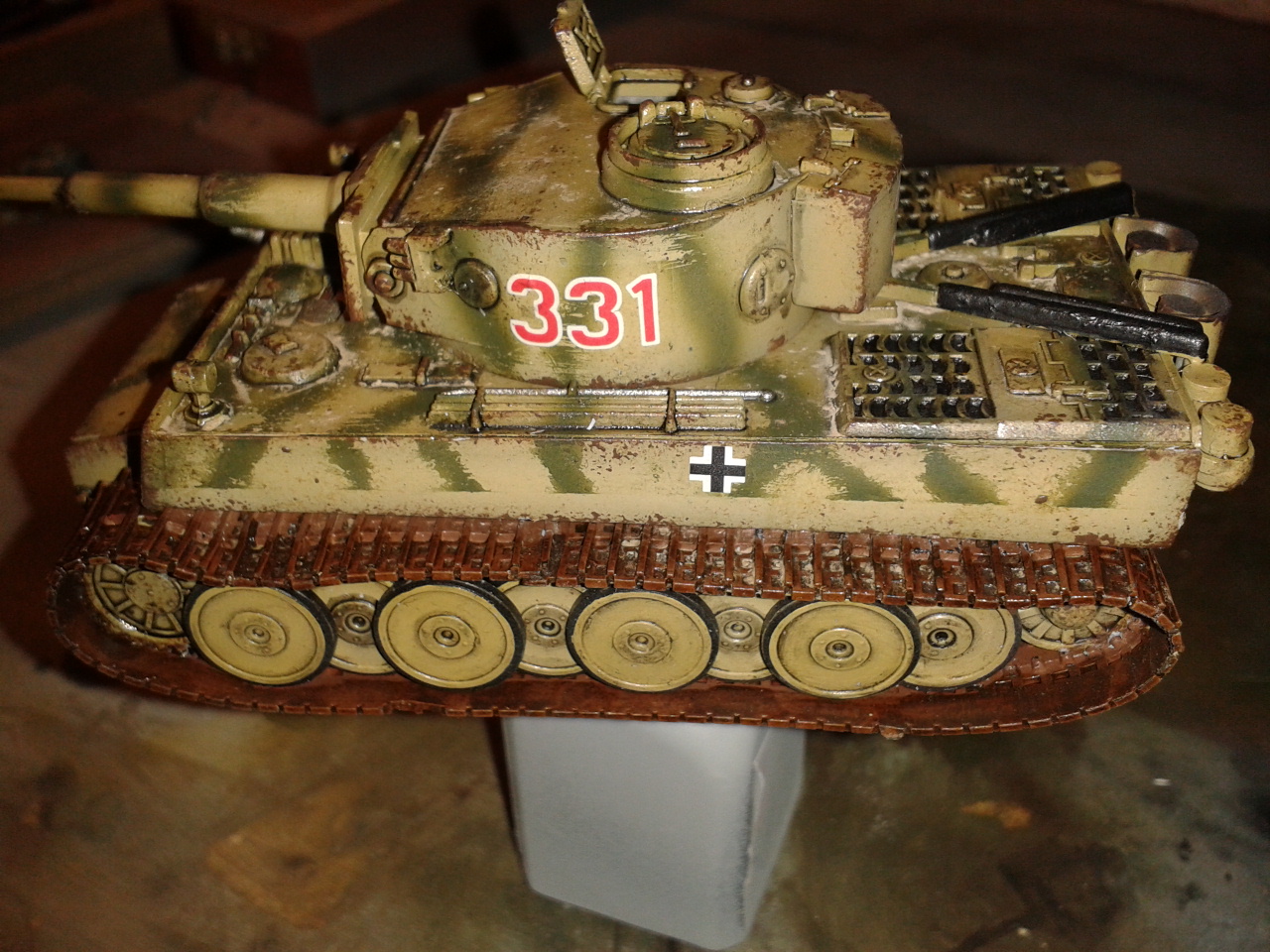 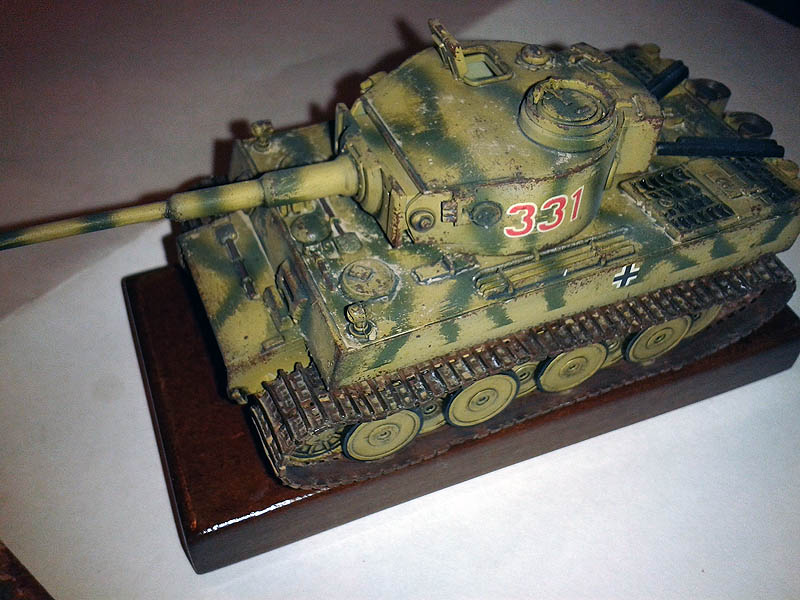 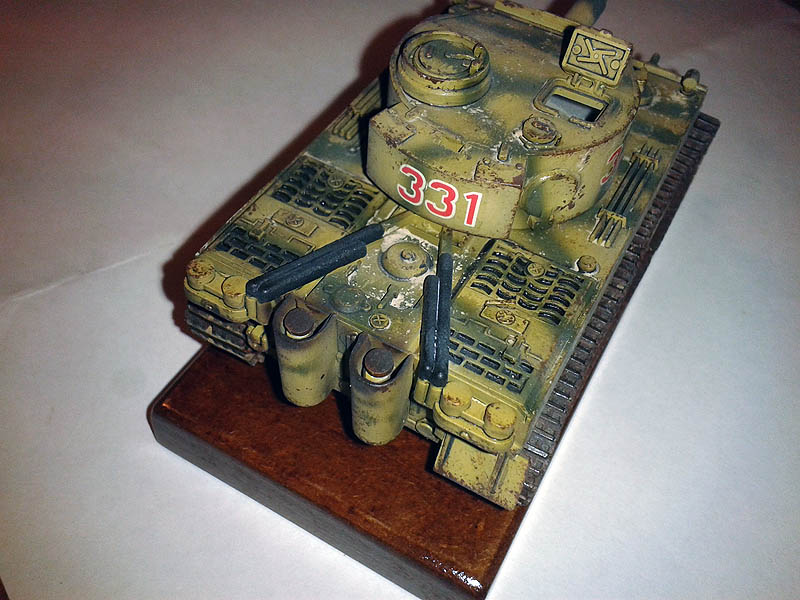 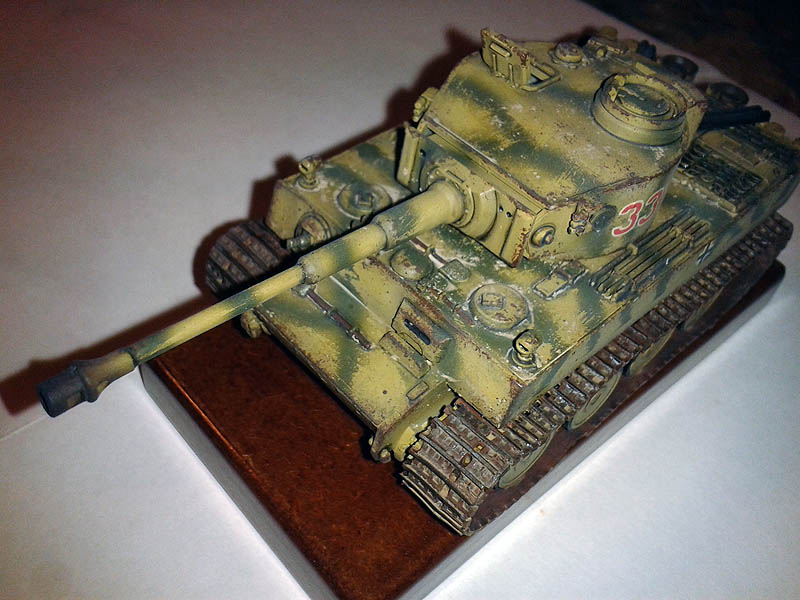