Mount few days ago kit Trumpeter which you can visit by clicking here (Tiger II Trumpeter), This was a version of Tiger II with Zimmerit, well then I will bring another kit of the same heavy tank Sd.Kfz 182 Ausf. B this time without zimmerit and brand Revell a scale 1:72, the two kit are really good at details the only difference to note is that in the kit Revell drive system comes in several pieces of hard plastic and not to loose links and other kits and Italeri are strings made of soft rubber and all in one piece.

This kit is Revell. 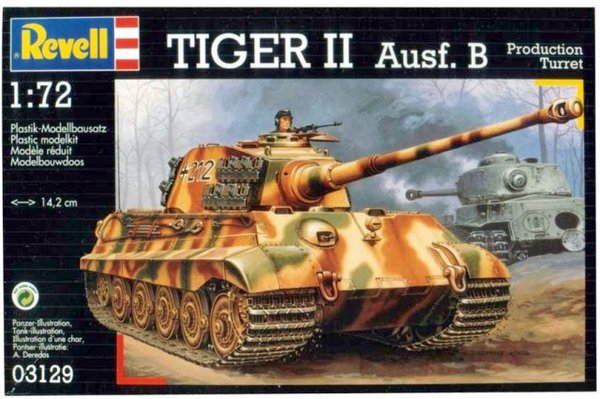 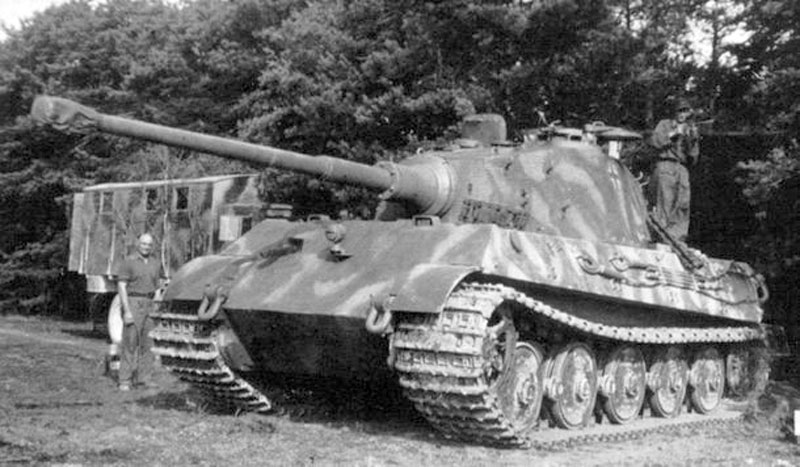 El Tiger II he began to conceive 1937, when Nazi Germany thought about creating an even more effective heavy truck and made the Panzer III and Panzer IV. The design was run by four companies: Daimler-Benz, Henschel, MAN y Porsche.

I created the Tiger, Tiger II project would not reappear until 26 May 1941, when Hitler and developers gathered. Hitler wanted a more powerful tank counterparts, very good performance in combat firepower and offensive capability formidable. A tank, in order, sobrepasase to weigh the enemy tanks.

To this end it was decided that instead of placing the Canyon 88 mm I had the Tiger I, one that could be put through an iron armor 100 mm, a Cannon effective distance 1500 m, as well as putting more armor and, despite the weight, I could move 40 km/h.

The development and production problems would be planted between different firms and car design office of the Department of Ordnance.

The Porsche prototype was called Type 180 the UK 4502 and had two versions: Butt the Ahead, The first version had the turret located backwards; while Vorne was located frontally. Rear version only three prototypes were built while the Ahead were approximately 50 vehicles, more 60 turrets type P2-Turm. All prototypes were used in combat.

The assembly of this kit Revell is very similar to the Trumpeter brand, although this carries the drive system with some more pieces is not complicated to assemble. 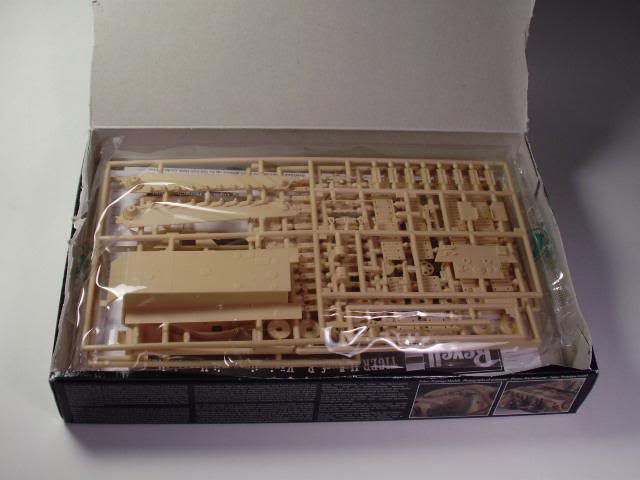 We started with the assembly, for this model I will totally eliminate the side fenders and overall wear due to combat. 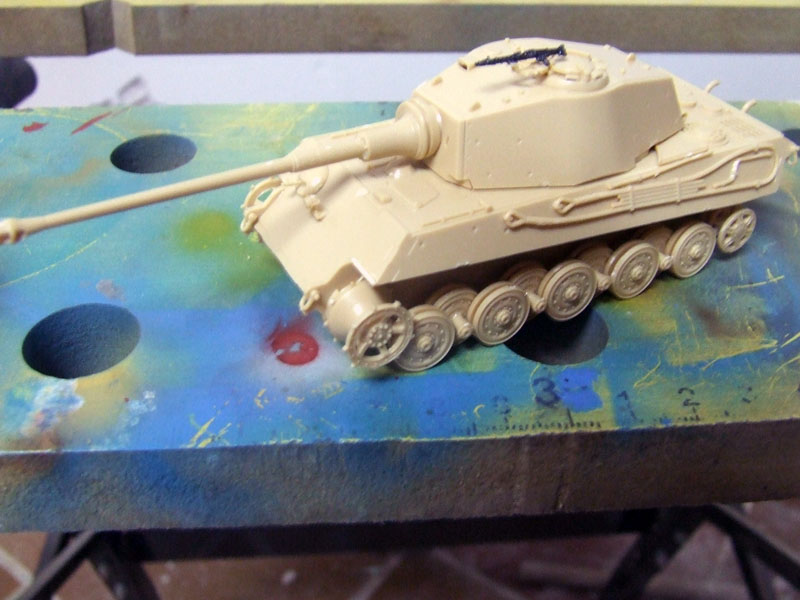 Once assembled and dry start with the painting process for this scheme camouflage kit I will develop in two colors Buff base XF-57 and XF-68 brown (Nato Brown) both matte and Tamiya.

We started with the primer gray base color and then the XF-57. 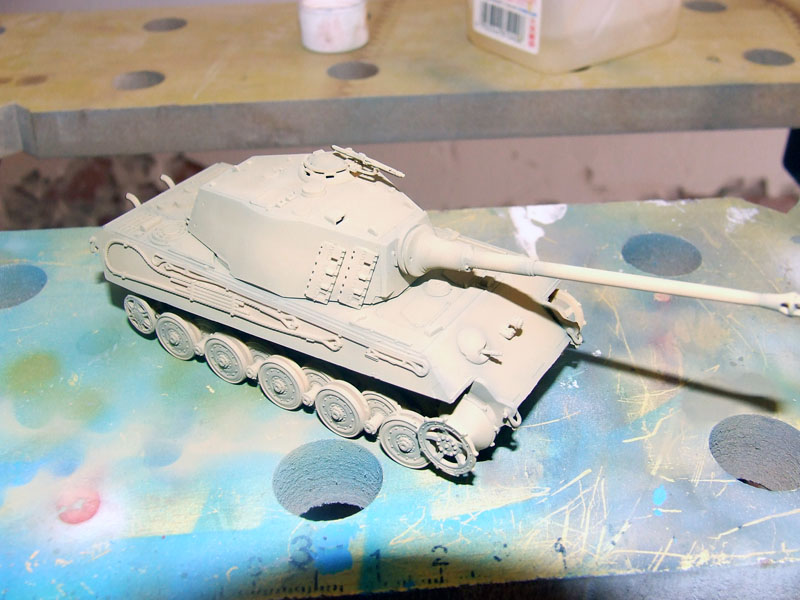 Let dry paint job with base color and once dry I will highlight the edges and corners sombreándolas, this technique is inverse to that normally I do that is to dilute base with white paint to create the lights to see that this is. 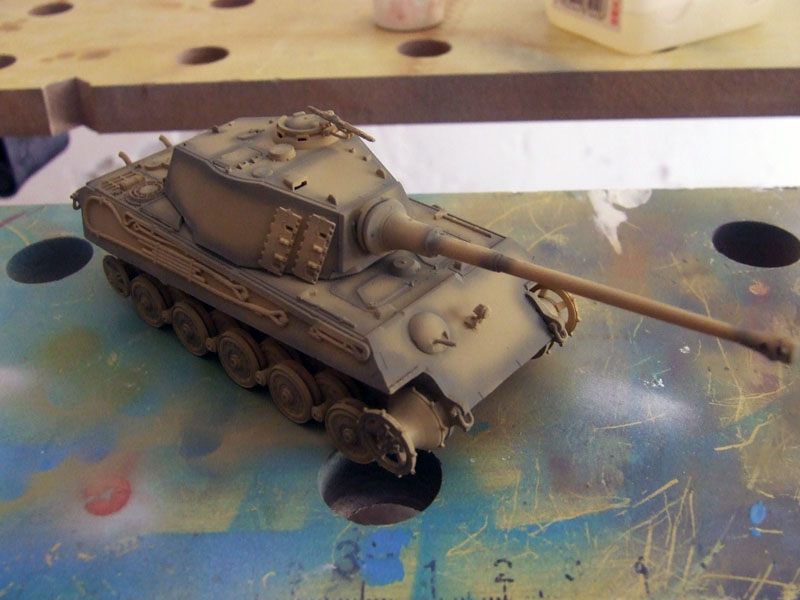 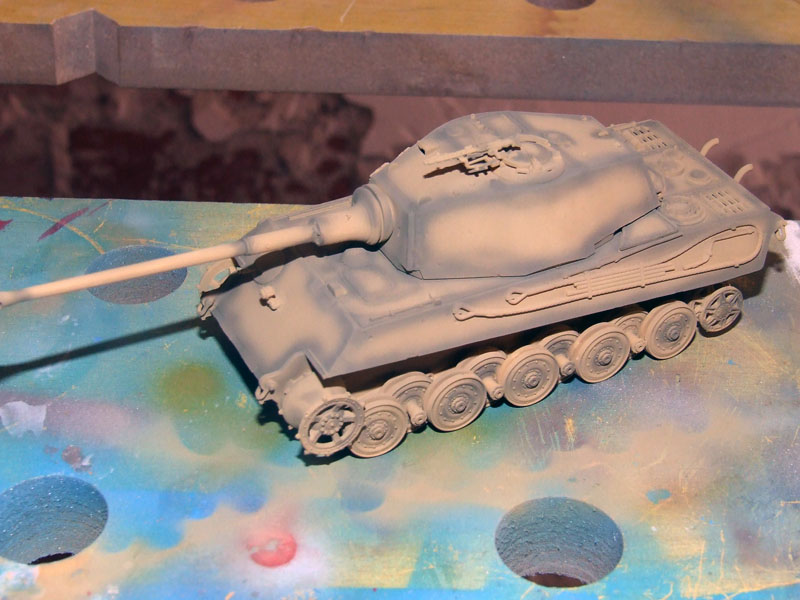 The effect is attractive but remained very dark color, so I'll give it another pass with the airbrush color very diluted basis this time not to delete the previous work. 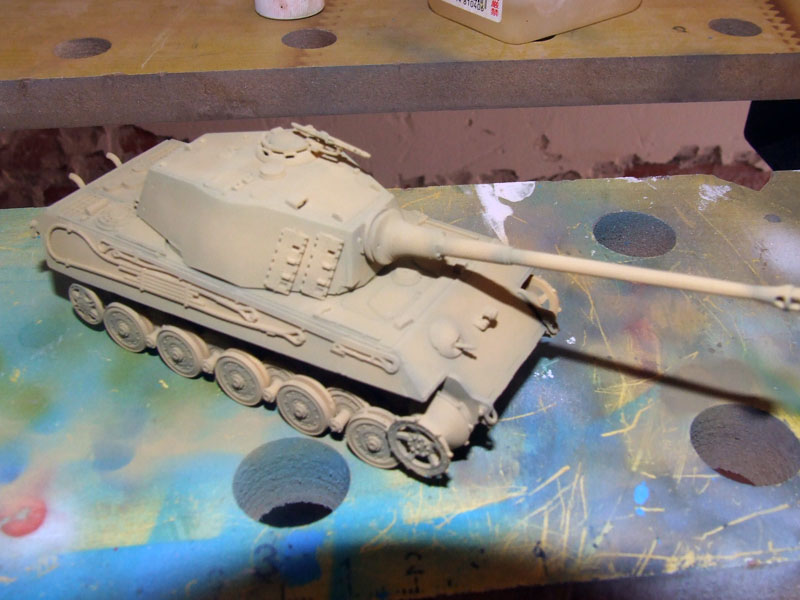 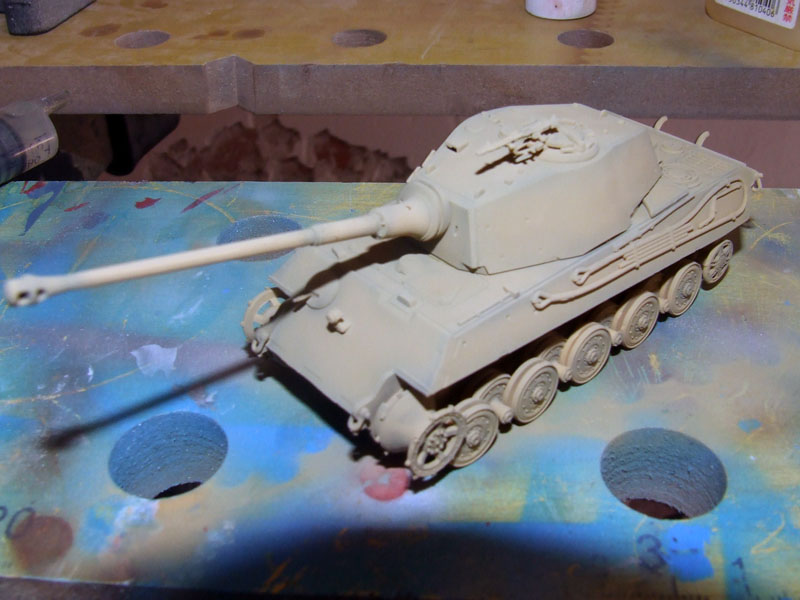 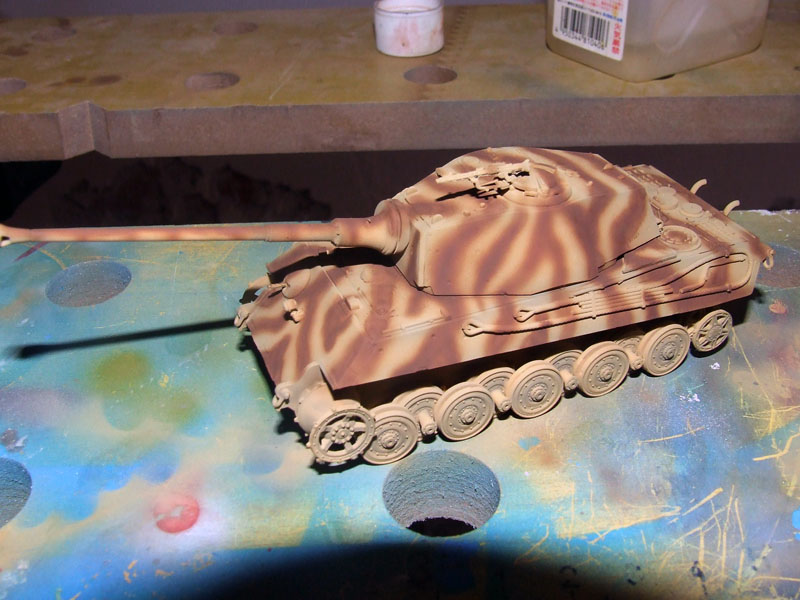 After a few hours and parts of the traction system and painted with reddish brown basis XF-64 and well seasoned proceed to mount the wheels piece by piece, easy thing since I deleted the fenders and have free access. 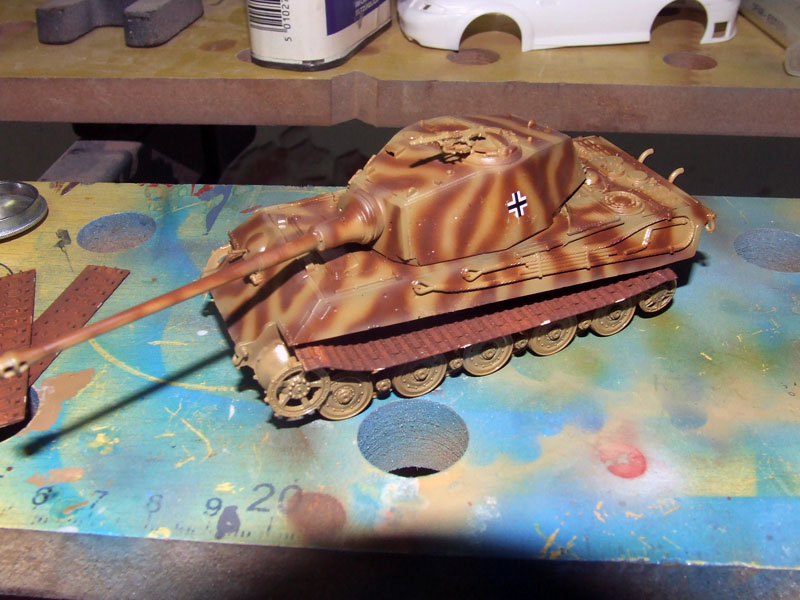 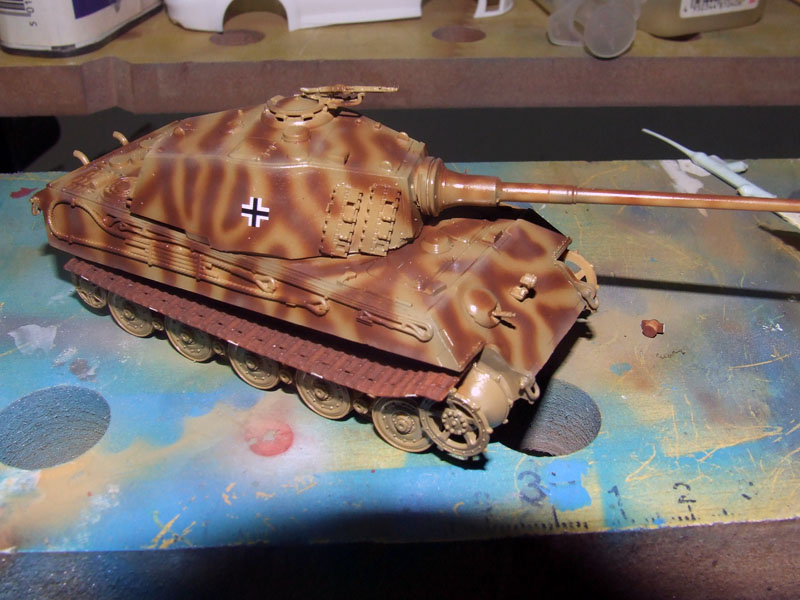 The next step is to paint all the parts and details of the car as warps, tools, guns etc. with their respective colors.

Step descorches brush to use brown and buff or gray metal as required and again varnished with gloss varnish to protect the work. Finally I come to washing, this time I will not use dark colors as used in the Tiger II Trumpeter, Here I use yellow highly diluted to give an effect of dust the entire cart, including the drive system. 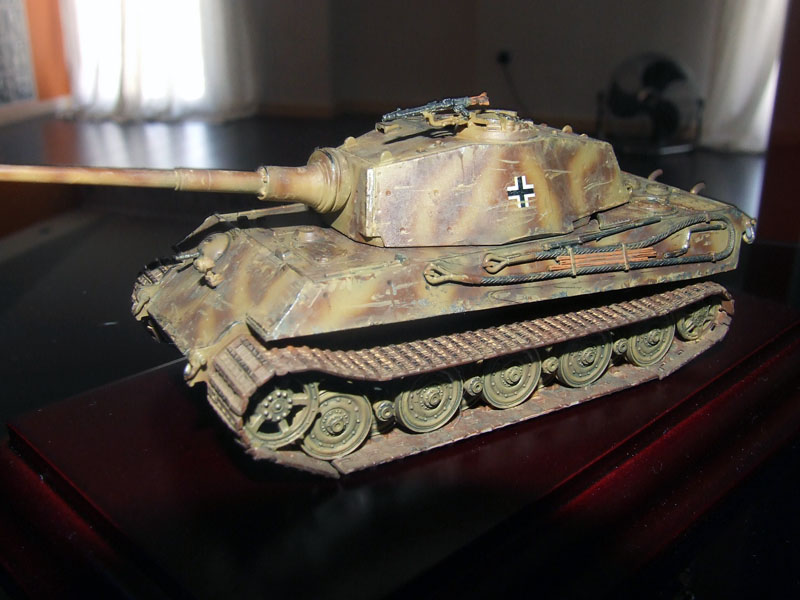 To give a little more metal effect in some corner of the carriage and the parties with more friction drive system I apply a bit of graphite material directly with the pen or as powder, this gives a metallic gray metal pulling worn by rubbing. 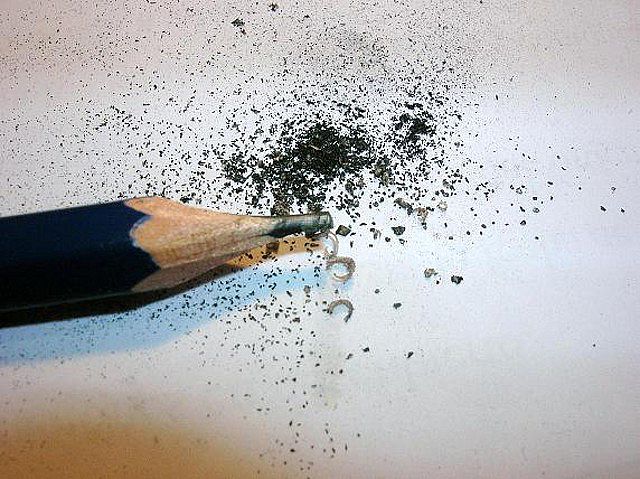 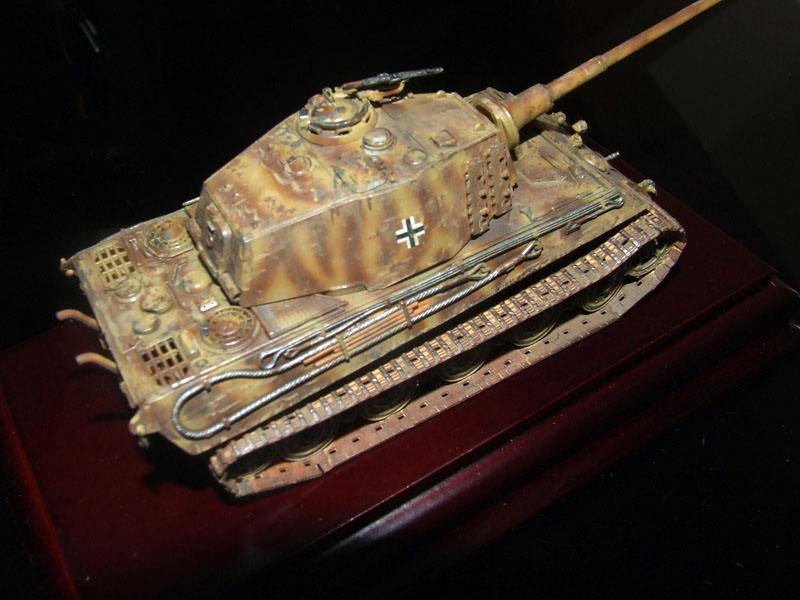 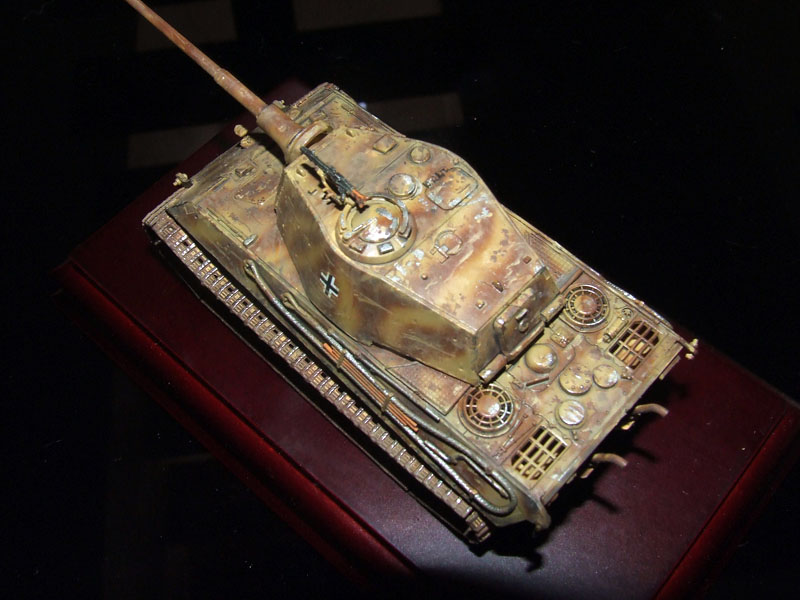 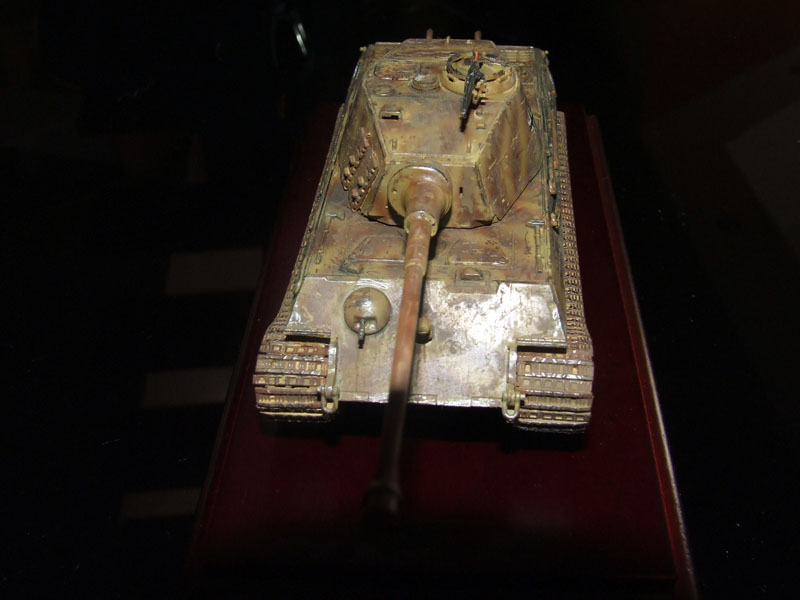 Finally we must eliminate glare and ultimately protect the entire paint job, washes etc., for that I give him a pass matt varnish to the entire model and let dry for a few days. 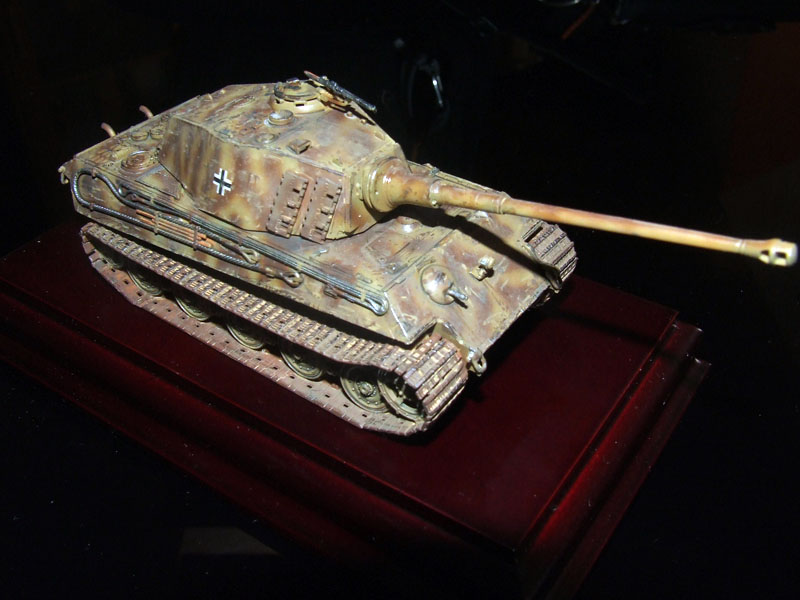