Who never heard of B17 Flying Fortress, one of the best Allied bombers during World War II, Well many years ago by 90 buy a kit Airfix a scale 1:72 which mount and other kits of this brand to be pretty bad out there and leave forgotten that the steps the years and go from here to there and go through the hands of my son ended up with just the frame, without wheels, propellers, crystals etc.. Looking for some things I saw it and thought why not try to recover this beautiful plane? A I've always liked the design of the B17 any other heavy bomber of World War II, So I put hands to work. 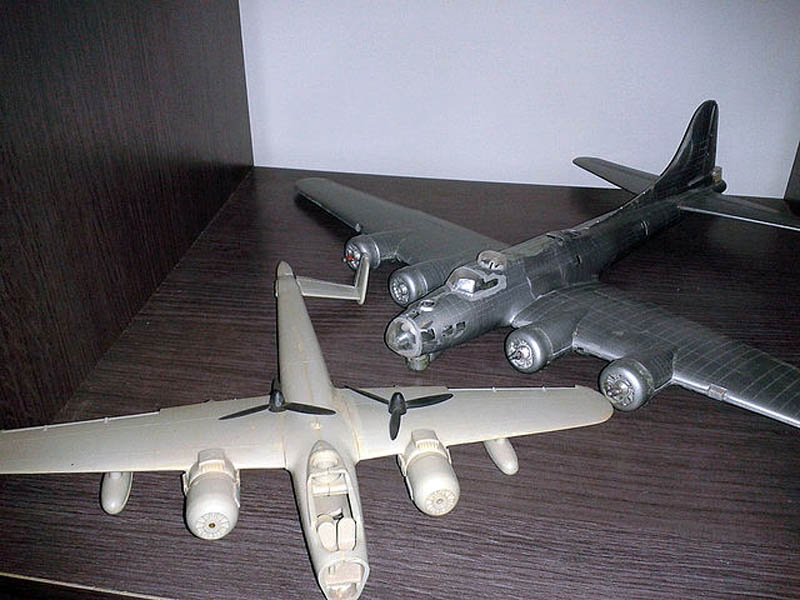 Although as I said had no box frame assembled only show you the original box and staples with all its original parts that I found online. 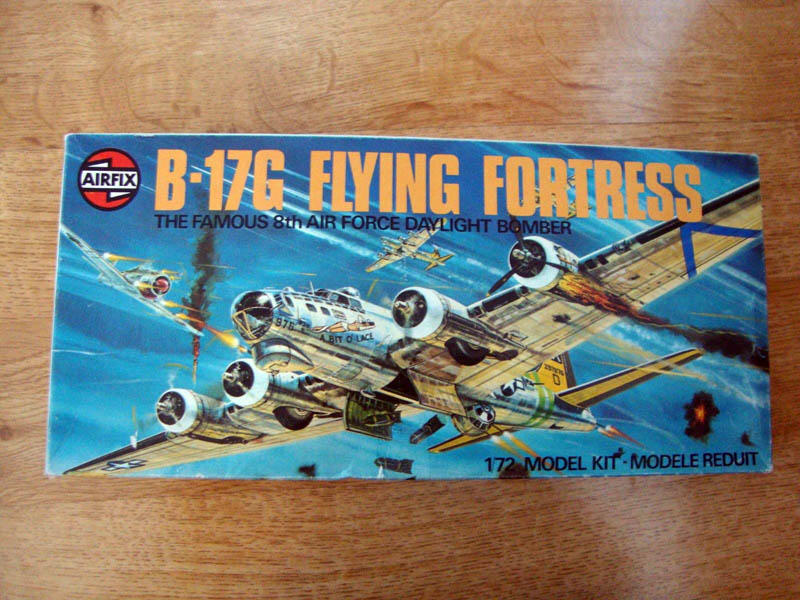 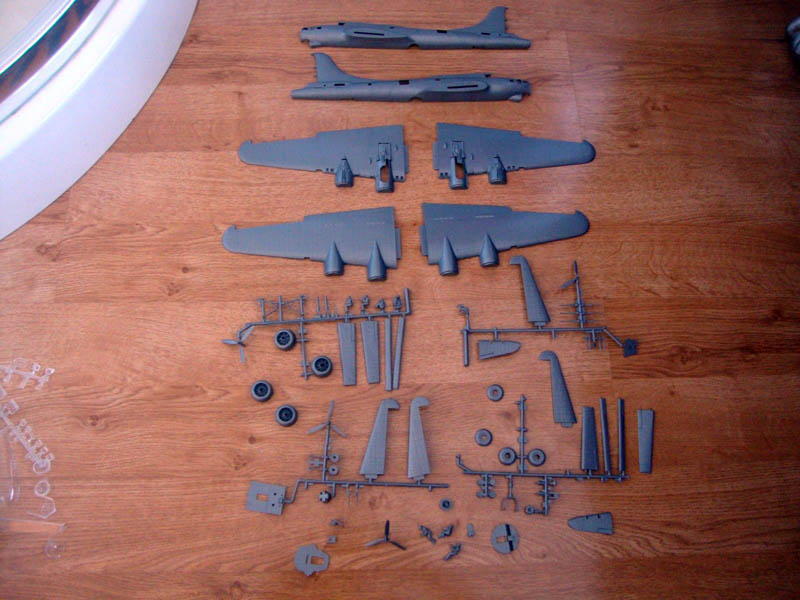 A little history on the B 17 / G Flying Fortress: 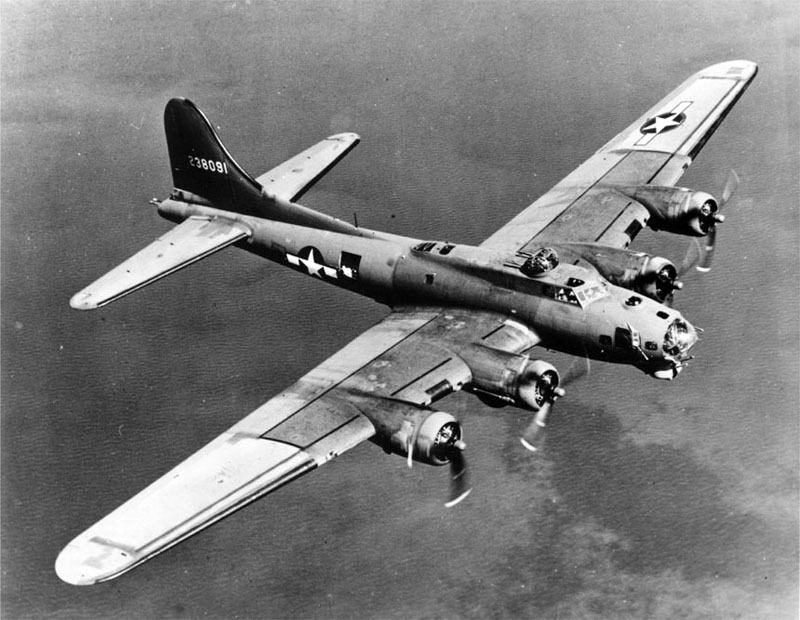 El Boeing B-17 Flying Fortress (Flying fortress) It is a famous four-engine heavy bomber of World War II, made from 1935 and put into service 1937 in the United States Army Air Forces (USAAF) there RAF (RAF) From United Kingdom.

He made thousands of missions with the Allies during the war, especially in Europe, but also he took part in the Pacific campaign, proving to be one of the most reliable bomber match with the Consolidated B-24 Liberator. The latest versions of this bomber were armed with 13 ametralladoras de 12.7 mm and could load almost 8000 kg bombs (depending on the model).

In total they were manufactured 12 677 apparatus for Allies. Most were built at Boeing plants in Seattle, WA and Wichita, Kansas, but it was not the only manufacturer: also they produced Douglas Aircraft Company at its plant in Long Beach, California, and subsidiary of Lockheed Vega Corporation. About one-third of the total, some 4750, They were lost in combat missions.

The Serie B-17E was the first mass-produced. They were made 512 unidades, serial numbers 41-2393/2669 y 41-9011/9245, They are incorporating the novelty of two turrets with double machine guns Browning M2 12,7 mm, one dorsally and ventrally other. The first 113 units carried on a turret ventral remote commanded, but as this proved to be ineffective, It was replaced by a Sperry turret-shaped bubble, in which the artilleryman manually operated with cranks and pedals; It was required to be very small to settle there, in fetal position.

The entire rear fuselage was redesigned to solve a problem “blind zone”, incorporated in the tail another turret with two machine guns, which prolonged the fuselage in almost two meters. the pump capacity and increased fuel, so the model was something slower and heavier than its predecessor B-17F, but much better defended. The first unit flew 5 de septiembre de 1941 and the last one left the Boeing plant the 28 May 1942. Due to increased defense positions, the crew of the B-17E was of ten men: pilot, co-pilot, bombardier, navigator, Flight Engineer, radioperador, gunner, gunner ventral and two lateral gunners. The frontal machine gun was usually operated by the navigator or the bomber when they were not dedicated to specific tasks, and the dorsal turret was usually operated by the flight engineer.

The assembly has been nil, the plane was assembled and lacked all external parts, although he had already stuck the glass nose and cockpit, also found crystals of the upper and lower turrets, but without the anchor, I managed to adhere to the fuselage and stayed there as it. So I masked all crystals, I Caulk joints and started sanding work.

Once completed, as always apply the layer of gray primer for failures and repair. 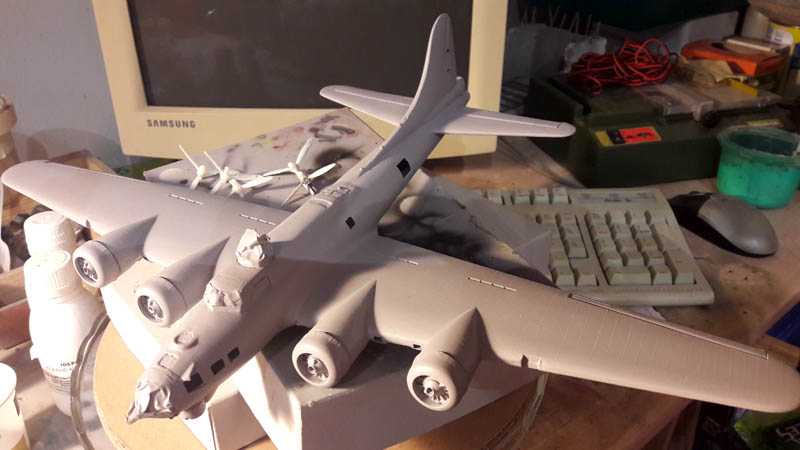 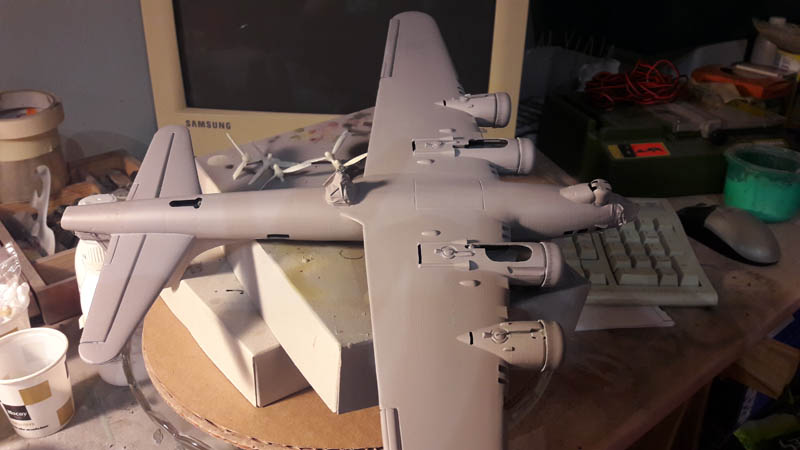 The hardest thing to find was to be the propellers after searching for the disaster drawer I could only find a corsair F4F same scale and compared them were to 90% which most resembled and decided to replicate with the help of molds and resins.

Here the result, the imperfections with putty and sanding exceed. 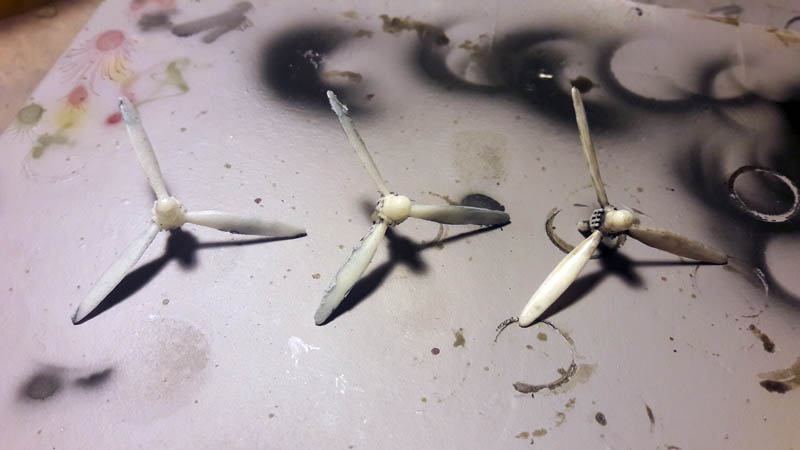 Work to camouflage any internet I looked really striking and beautiful, I finally decided, the best for the kit was to finish with an original uniform of a B17 pilot 401 Bomb Group I operate in the 8ª Air Force in England during World War II and I own and rest in my collection, the plane just flew into the G variant of the B17. 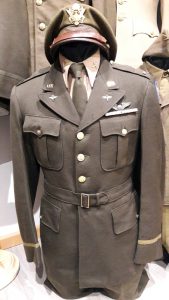 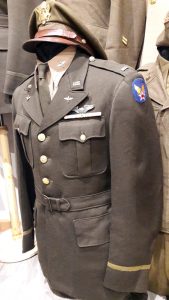 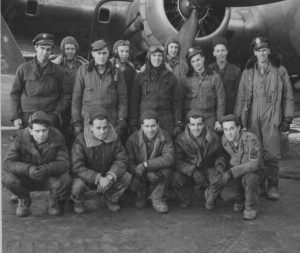 Crew and uniform B17 401 Bomb Group during World War II

This aircraft had little coat of paint almost 90% It was shiny metallic aluminum color and some olive green in the middle of its engines and the nose, black and yellow wings and ailerons and little else.

Looking for a range of metallized it is really good I found the range of AK-Interactive, XTREME METAL and I decided to try it. 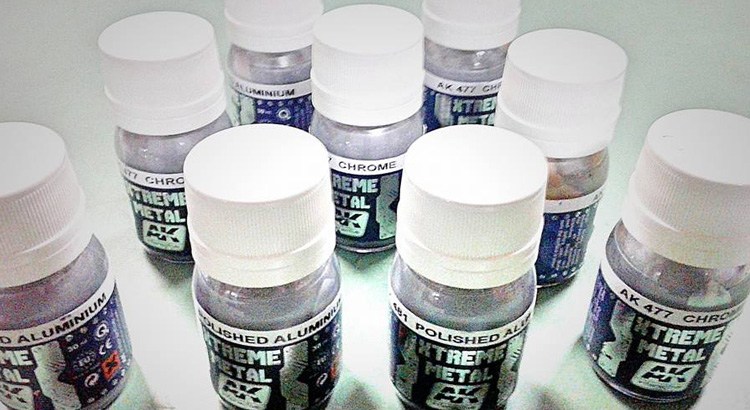 To do advise print a glossy black layer before the base color, for that use black glossy Humbrol enamel numbered 21. 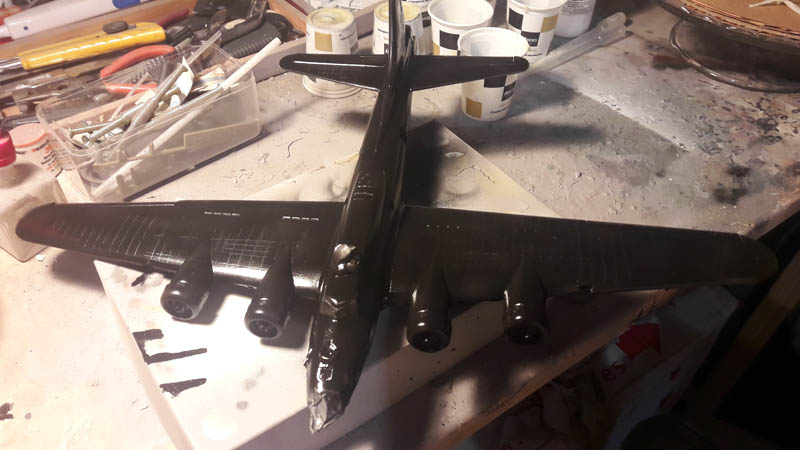 Then XTREME METAL layer and once finished and dried paint with some other tones metallic panels and flaps for some contrast and discontinuity, I use for these panels mixed with black XTreme 80/20 Humbrol Metallic Silver and numbered 11. 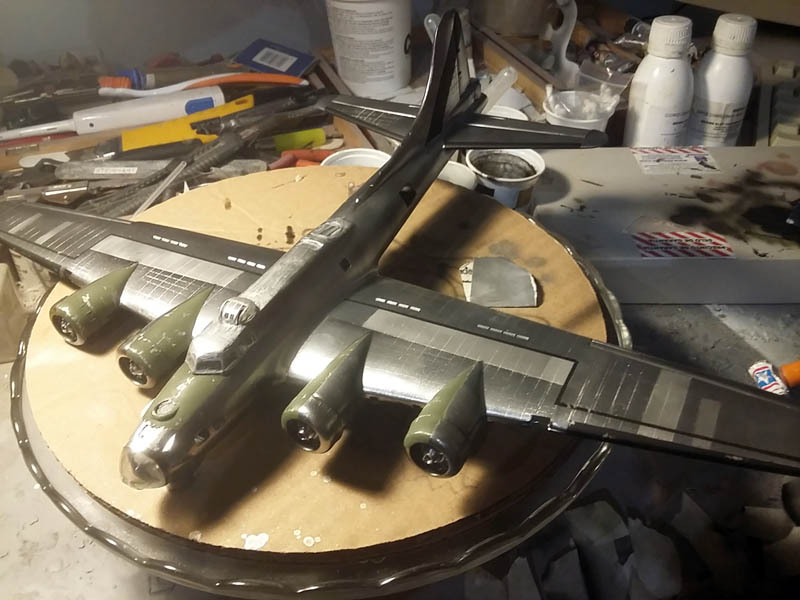 Green engines and nose, olive green de Tamiya XF 62 with some central rinsing mixing the base paint with white also of the same brand XF 2 a proportion 80/20. 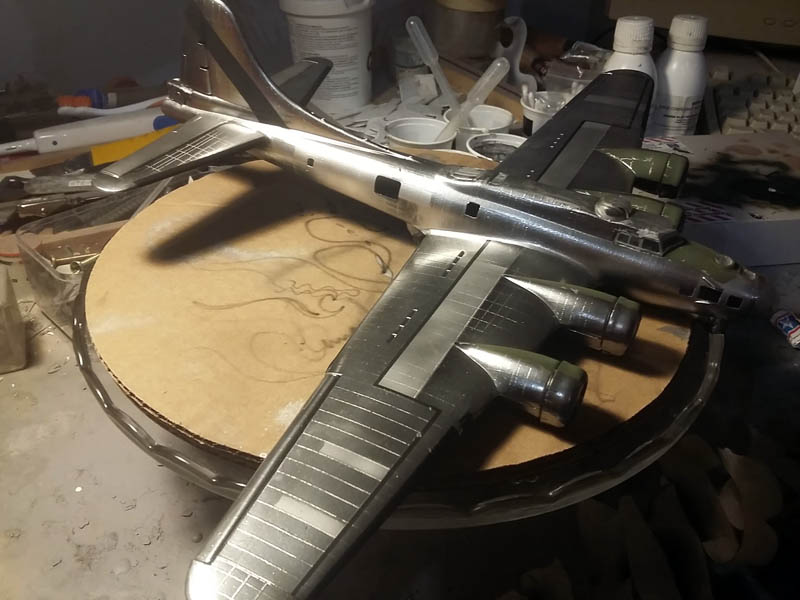 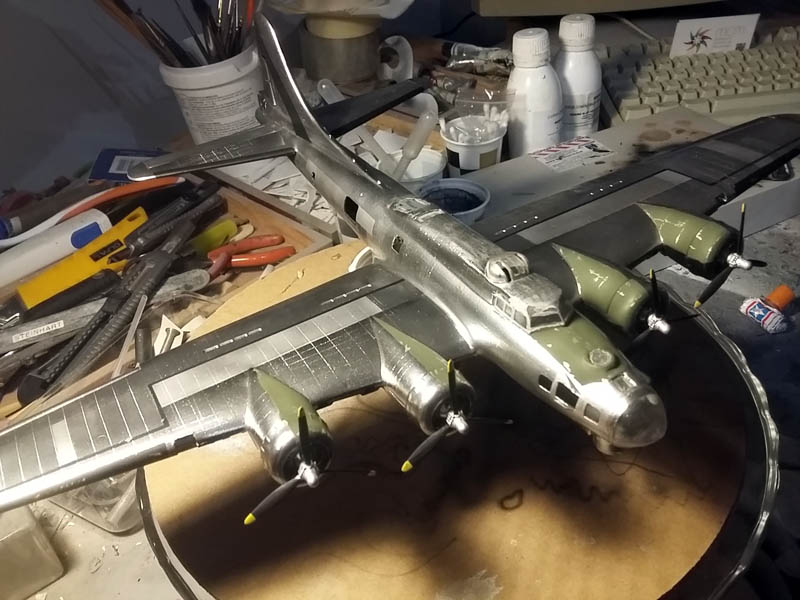 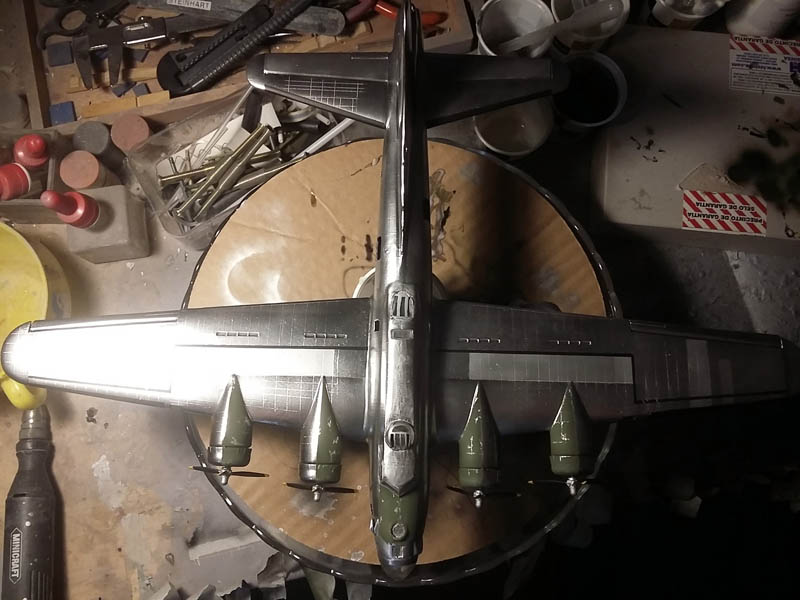 I again sanded and putty cockpit B17 misaligned because I leave a gap with another. 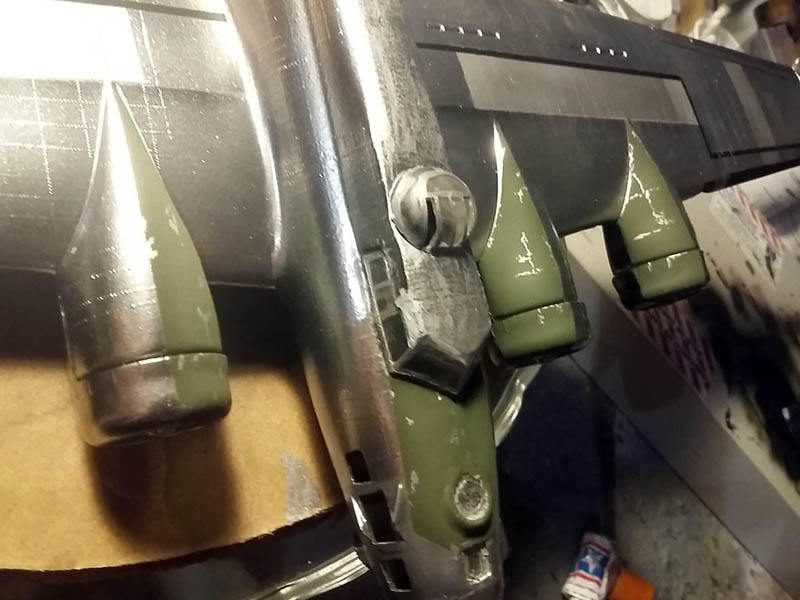