One is the best available in the world after the Second World War medium tanks was certainly the T 55 Russian almost direct descendant of T 34, although not a model of the Second World War curves give this model a unique aesthetic touch to any other chariot the world, why always wanted to ride one and now by only 9 € can be achieved in many web sites obsoleto de este Italeri kit and escala 1:35, Collection in installments "Tanks"Although not the best in kits, by that ridiculous price for a model at this scale, you can ride a nice T 55.

The kit in question is this: 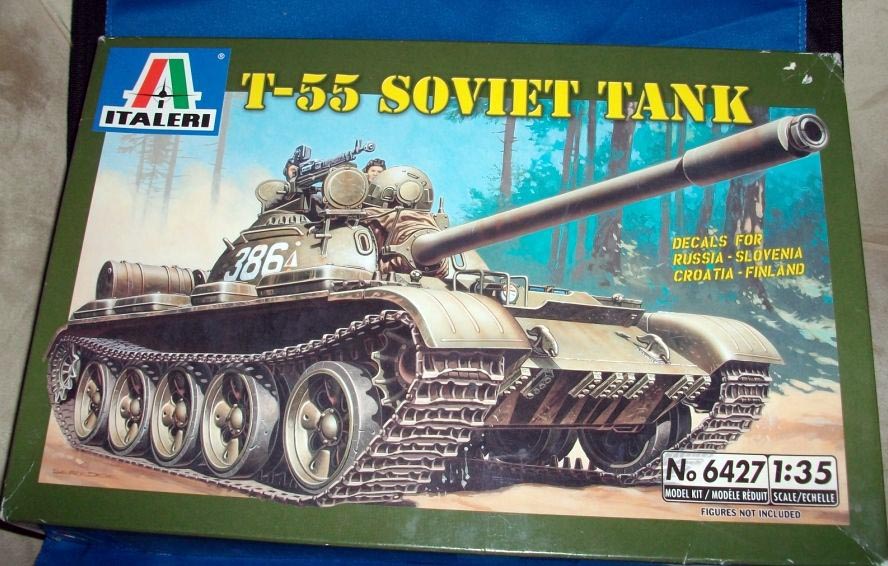 A little history on the T 55 Russian: 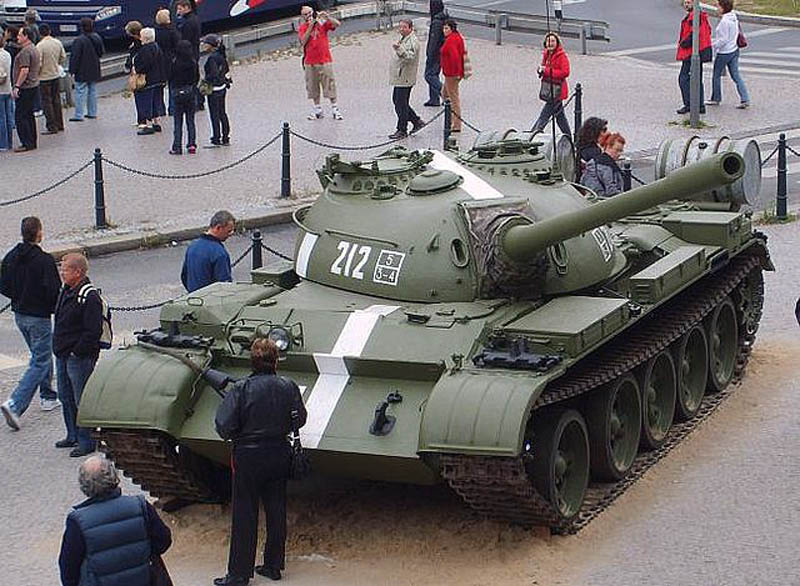 Los T-54 y T-55 were tanks designed in the Soviet Union, direct descendants of the T-34 WWII. The first prototype of the T-54 was built in 1946 and entered production 1947. After a series of major changes, The T-54 was renamed T-55 1955. These tanks were exported to more than 50 countries, produced and continuously improved to 1979.

The T-54/55 was the standard tank armored units of the Red Army, Warsaw Pact, and other hosts until the appearance of T-62, with whom he lived until his replacement by the T-64 and T-72.

The contents of the kit comes with 3 parts packages, 2 correspond to the tank itself and other chains undercarriage in this kit comes in hard plastic format, for me better than the typical rubber.

The kit comprises 4 formats for camouflage and decals, 2 corresponding to models Communist Russia in different years 60 y 70 and other armies as the Croatian. 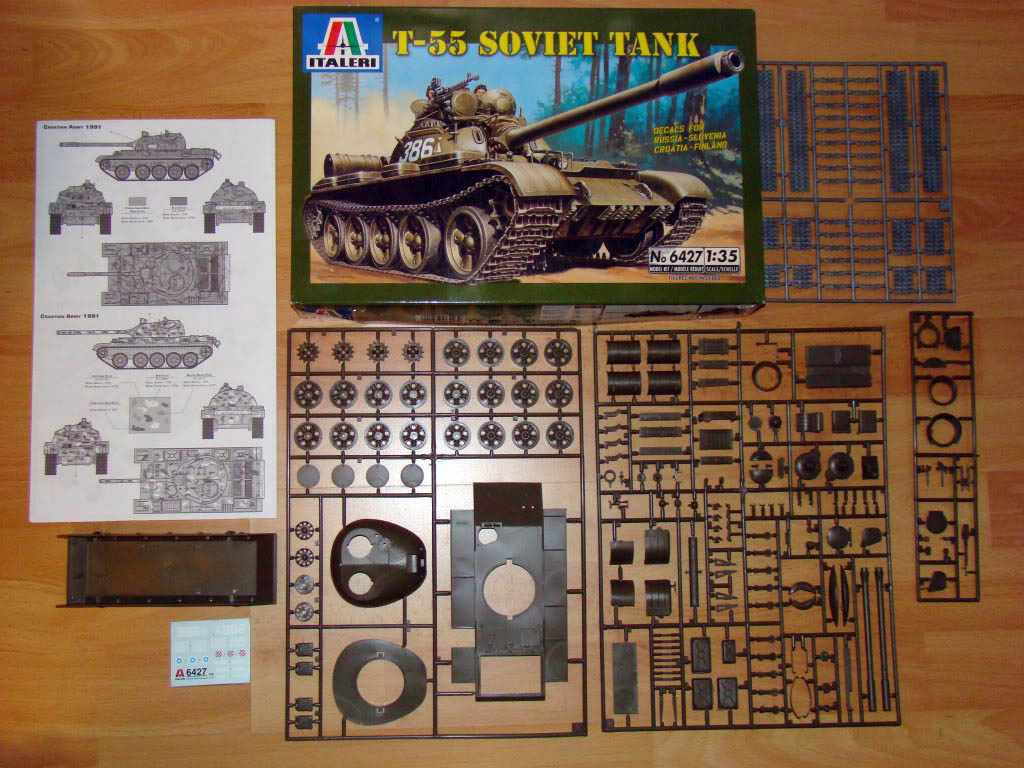 It is a fairly easy mounting kit, although I have not posted the steps for assembly with some putty and sanding can solve several problems in some binding together kit.

Spent directly to phase paint, after applying the primer I use Tamiya greens, XF-61 Dark for the base and the XF-67 Nato Green lighting Green. 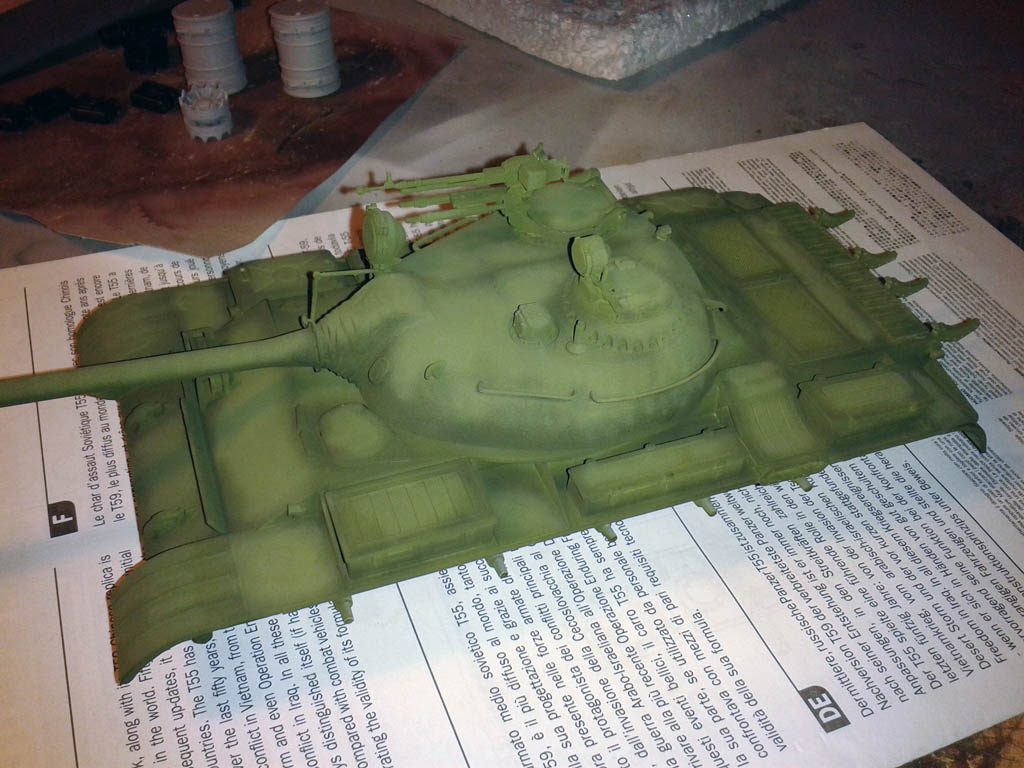 To guard cannon at the junction of the turret using two shades of colors tamiya XF-68 Nato Brown for the base and XF-57 Buff lighting. 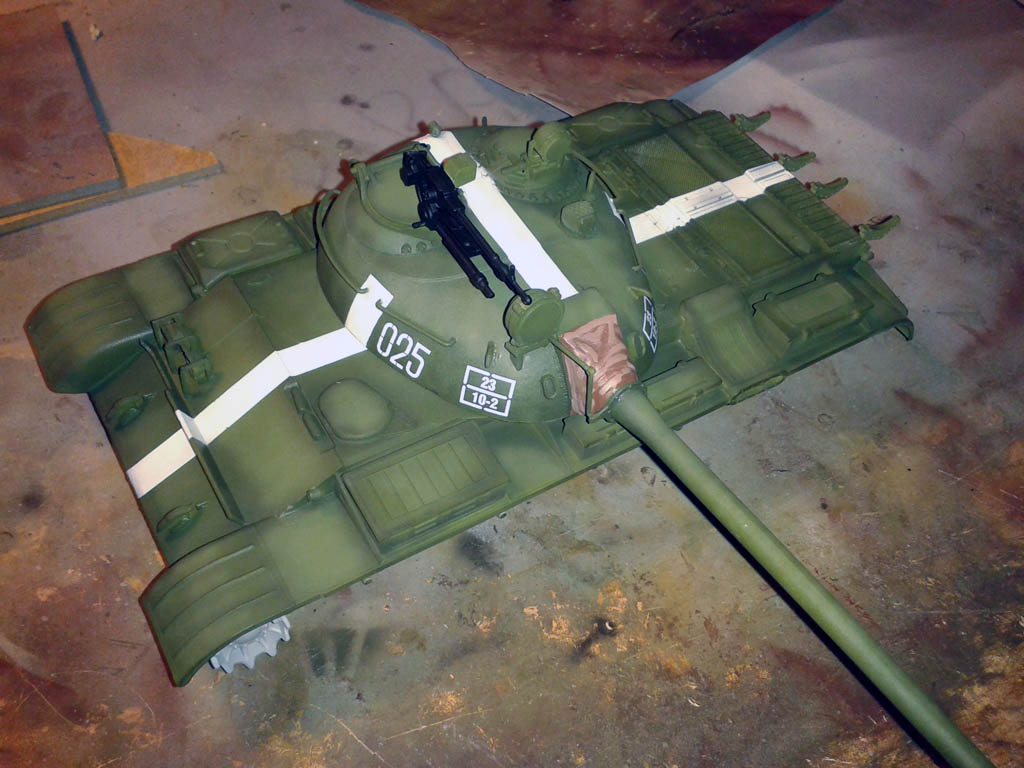 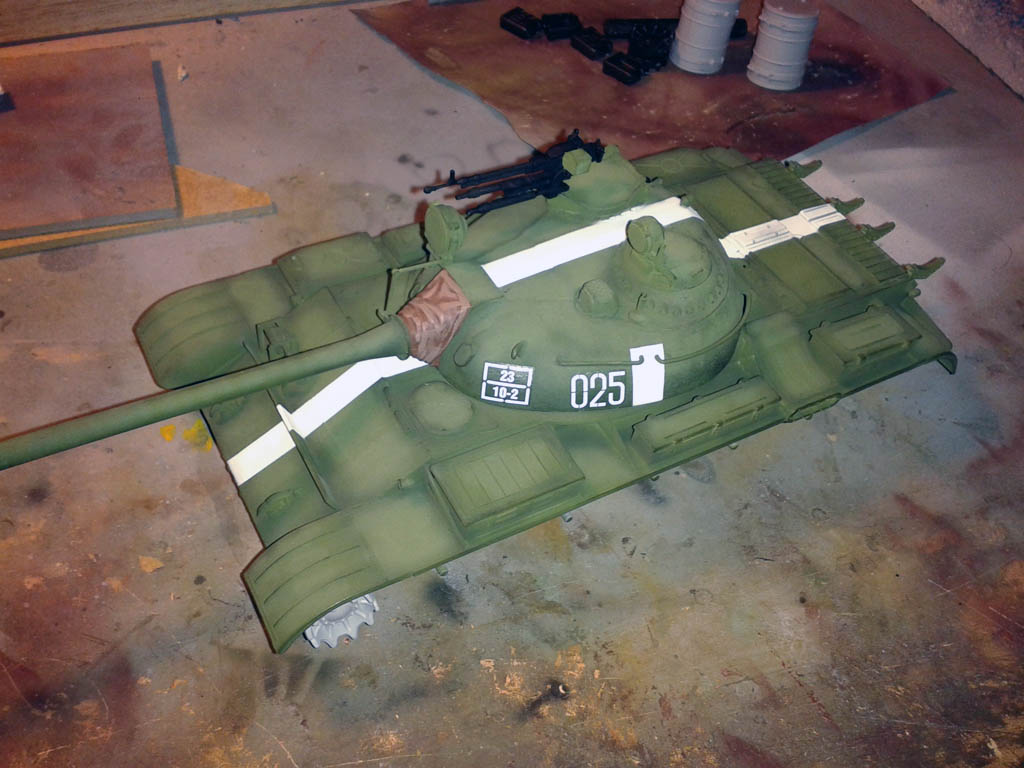 Once all dry well, this time the decals applied without any protective coating paint, using only fixing liquid calcas, then protect all work including decals with a satin varnish, following the steps read in a magazine modeling "The weathering magazine".

Paint the wheels with the same green colors as the base car and the tires in black. 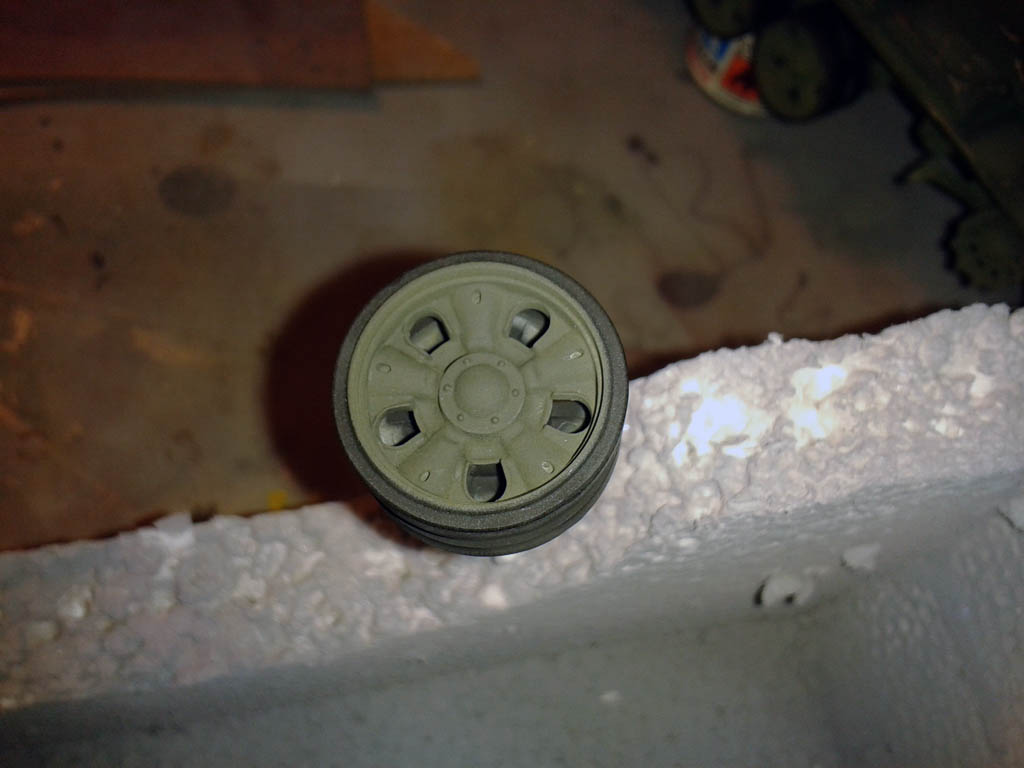 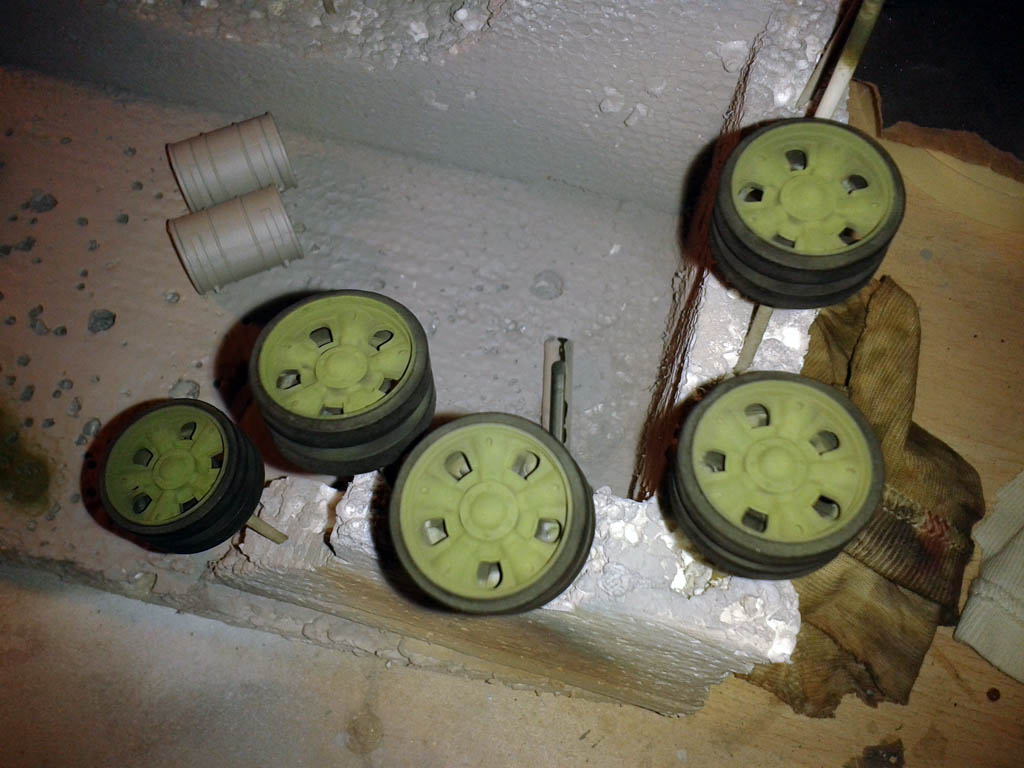 After standing a few days so that everything is dry start to aging, the first is to apply a descorches in the upper parts, turret and chariot wheels with brush technique, for this I use two shades of colors XF-60 Dark for degradation carriage base color and XF-64 Dark brown to rusty metal Amarillo. 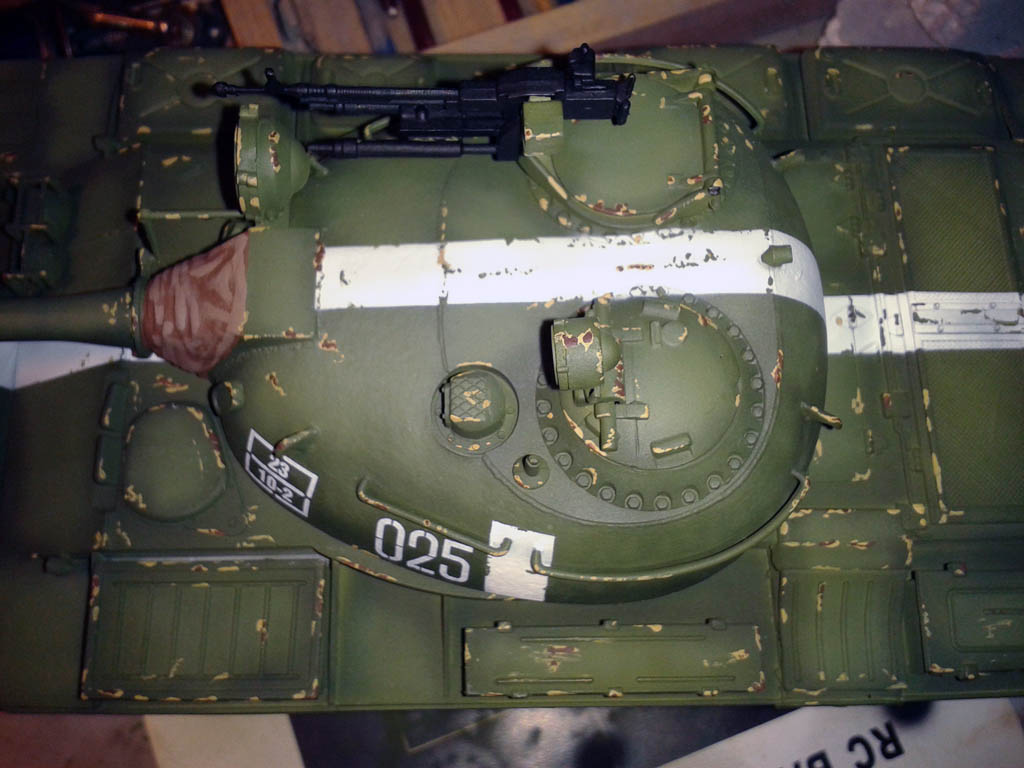 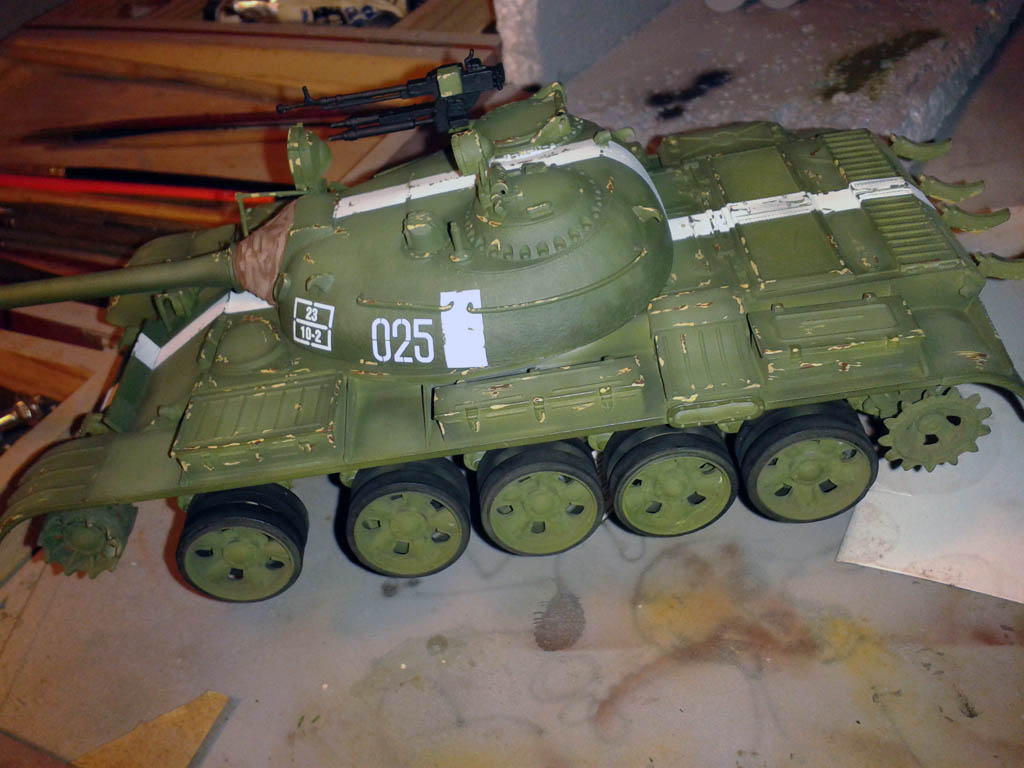 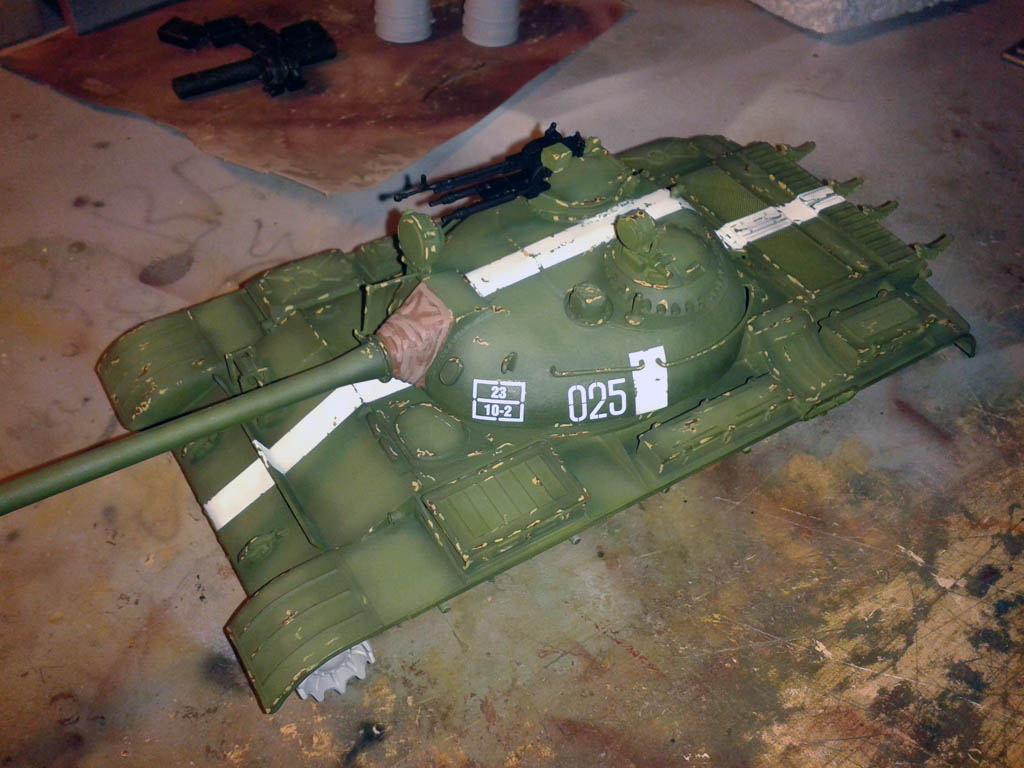 For the lower parts as inside the chassis and lower parts of the car using the same colors but with the sponge technique I apply the descorches. 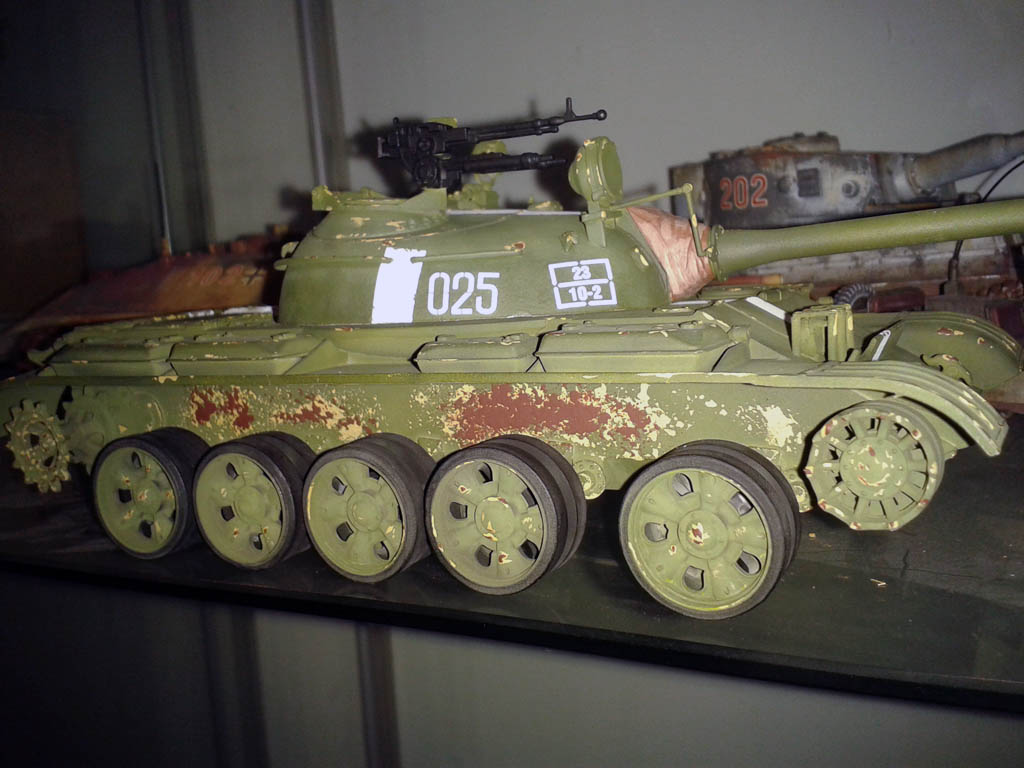 For wheel wear the technique I used is also the brush with the same colors. 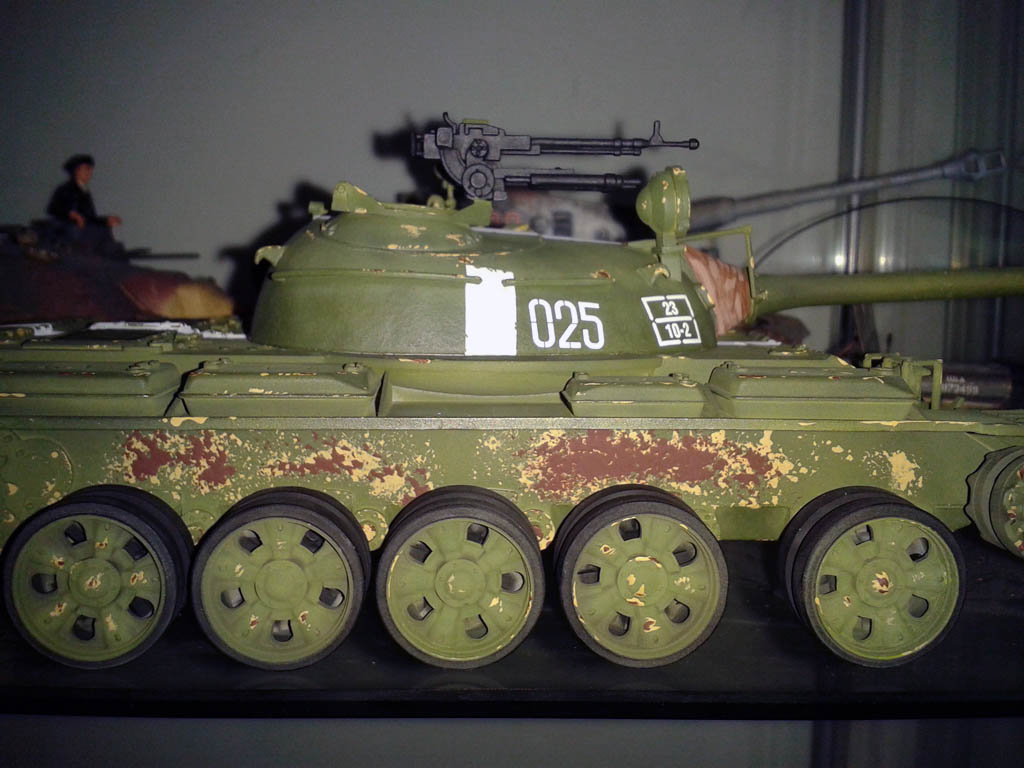 We continue with the model and now it's up to the traction chains, This kit takes these pieces of hard plastic with some loose links to fit the drive wheels and idler, within which fit these nicely detailed work them failing removing the typical mold circles. 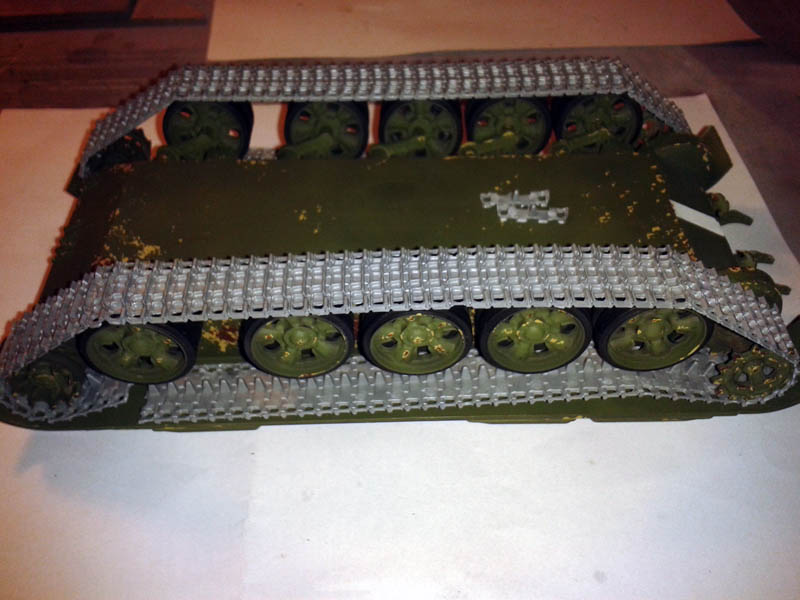 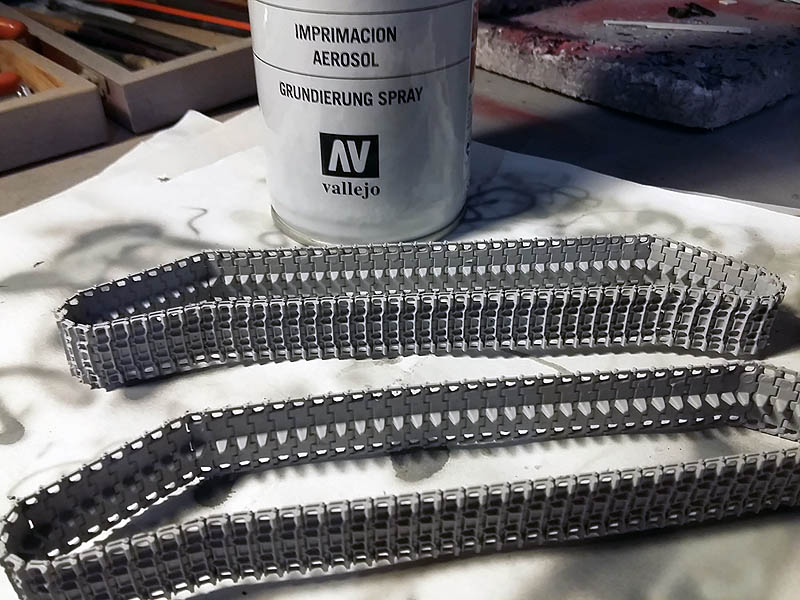 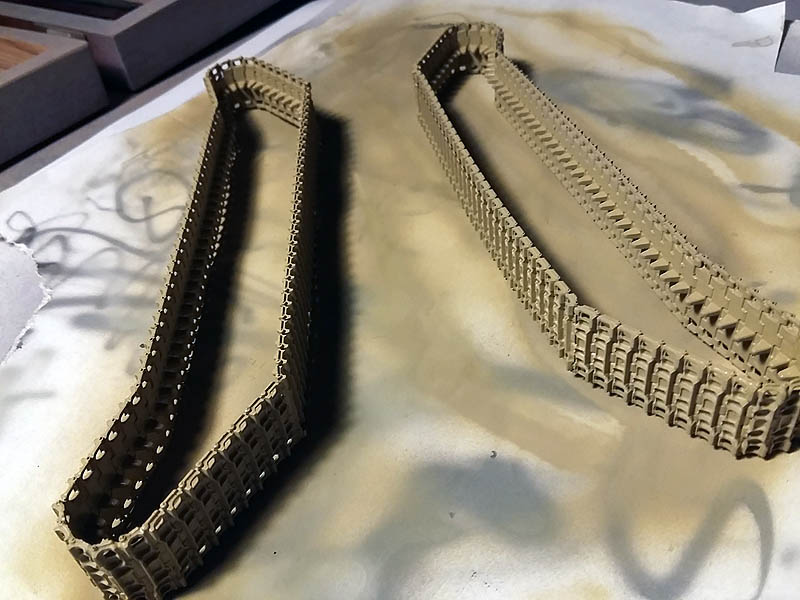 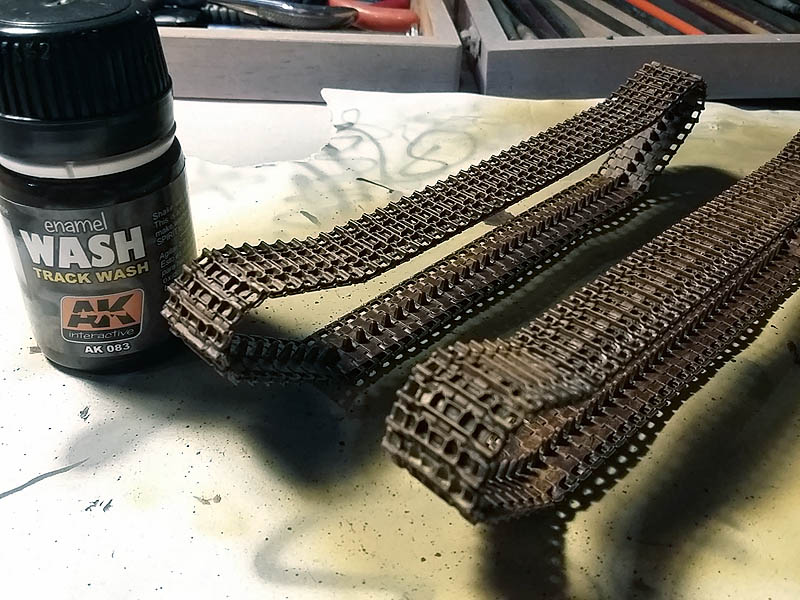 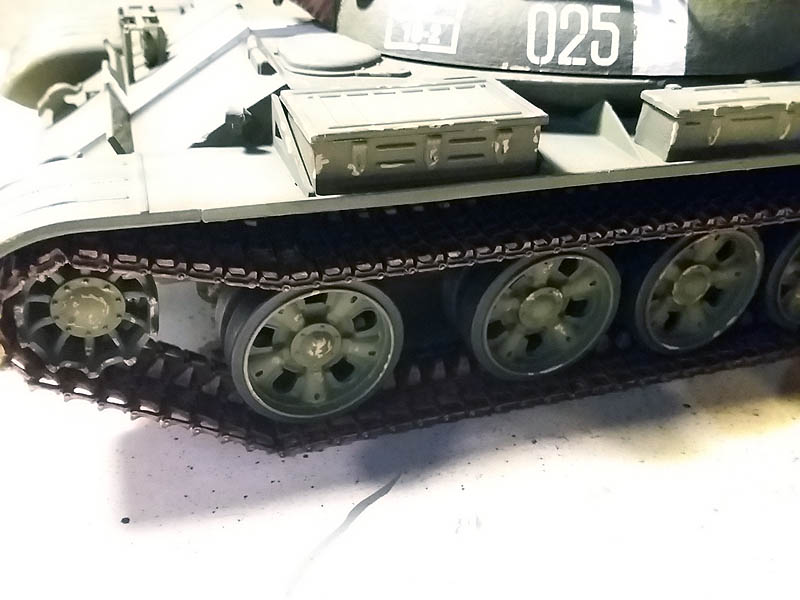 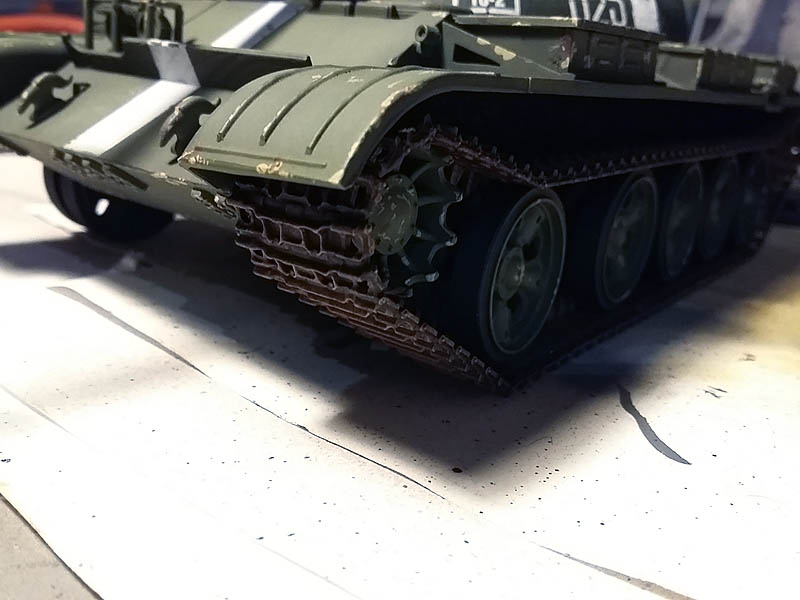